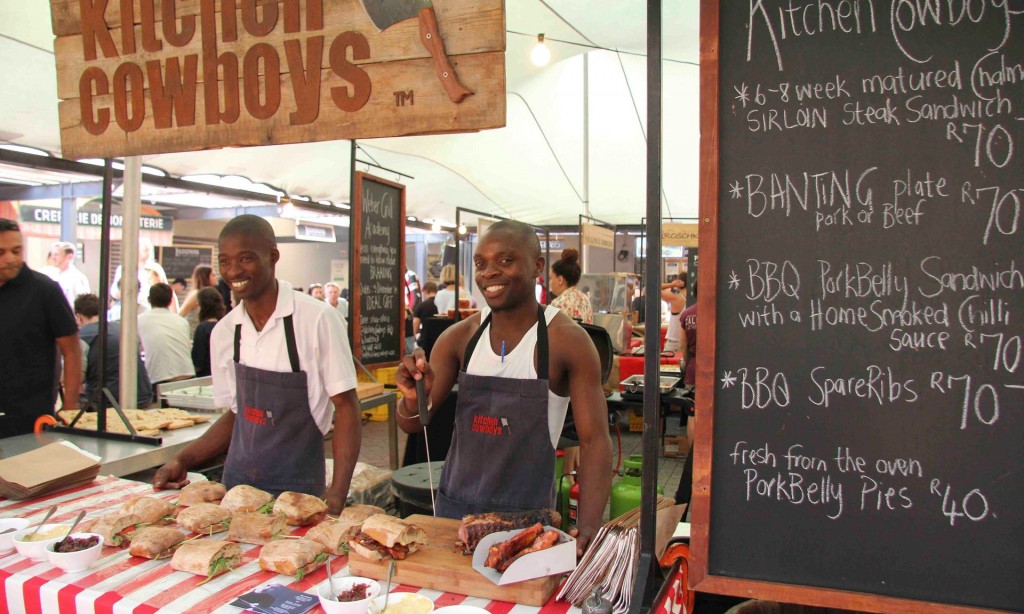 This seething weekend market at the Old Biscuit Mill in the heart of the Woodstock neighbourhood is a must for any street food lover. The problem is deciding what not to order from the 100-odd stalls. It’s difficult to resist the mushroom kebabs from Funki Fungi, farm-fresh raw veggies at SaladLover, or chef Shayn Schutte’s smoky beef brisket at the newest stand, Pulled & Roasted. By lunchtime, the lanes between the foodstalls are totally crammed. Everyone sits together on long communal tables, entertained by live music, and while traders sell a host of artisan ales and organic Cape wines, it is difficult to beat a lethal chipotle bloody mary.

Bree Street is one of Cape Town’s hippest food and drink venues, with places such as Jason Bakery, Culture Club Cheese and Mother’s Ruin, a gin joint stocked with locally distilled brands such as Woodstock, Musgrave and Jorgensen. And the newest bar on the block is dedicated to the humble bacon butty, elevated to irresistible gourmet levels by chef Richard Bosman, who is what South Africans call a fleischmeister of charcuterie. The signature bacon sandwich is hearty, rather than fancy; thick, juicy rashers served in what looks like doorstop slices of Mother’s Pride but are actually baked using a special sourdough recipe. There is homemade baconnaise, ketchup and macademia nut butter, while downstairs diners laze away in a chill-out lounge, garden and art gallery.

The Bo-Kaap neighbourhood, with its brightly painted houses, is becoming one of the most fashionable parts of town, and the venerable Biesmiellah, which has been serving the community’s traditional Cape Malay cuisine for 40 years, has just had a total revamp. Diners sit in a spacious, colourful cafe with huge windows looking out across Table Mountain. In keeping with Cape Malay customs, the cuisine is halal and no alcohol is served. The surprise about the dishes is that signature curries are much milder than recipes from south-east Asia because, as the owner, Momeena Osman, explains: “When the Malay slaves arrived here, they cooked their home cuisine but with our own subtle spices, which are not so fiery.” Don’t miss the speciality denningvleis, a tender sweet-and-sour lamb stew, and the unforgettable bobotie, spiced minced beef baked with egg-soaked bread and sultanas.

Cape Town has long been a goldmine for craft ale, but in this recently opened Woodstock locale, meat and beer lovers can have the best of both worlds. Begin with a tour of the state-of-the-art brewery on the ground floor, then walk up to the bright, modern dining room and long red-brick bar. On the menu are some exceptional IPA, malt and stout, accompanied by juicy giant steaks of dry-aged meat that comes straight from its own meat locker. It also proposes a beer-pairing menu where four of the brewery’s specialities – Californicator IPA, the amber Pot Belge and Hazy Daze, a Belgian-style white beer – are served with tapas portions of charcuterie, sirloin bruschettas and spicy meatballs.

There are several lively African restaurants in town – Mama Africa, Africa Cafe, Gold – but Marco’s is the one that really succeeds in attracting groups of foreign visitors alongside locals, so you never feel you’re part of a touristy cultural show. Marco himself mixes with the guests but keeps a regular eye on the kitchen, where his band of chefs specialise in hearty local dishes, such as oxtail curry,umleqwa spicy freerange chicken and a signature smoked wild-game carpaccio of springbok, kudu, ostrich and impala. For the brave, try a smiley – a boiled sheep head, about which Marco says: “If I didn’t serve these every night, I’d lose my local clientele.” The live bands change most weeks but expect hot afro-jazz getting everyone dancing until late.

There is no better bar in Cape Town to discover the latest trends in South African wines than this dimly lit watering hole right in the city centre. Behind the bar, Christie and Jesse enthusiastically uncork the latest bottles by independent organic and biodynamic vignerons, and small tasting tumblers of five different wines cost just R100 (£6). Open from 4pm till late, Publik shares premises with an artisan butcher whose delicious sharing plates of charcuterie are offered – don’t miss the unique biltong-cured beef – along with a surprising range of cheeses from nearby farms, including a tangy local take on gorgonzola.

Fashionable Camps Bay is lined with swish, expensive diners with superb views of the ocean. But tucked away in a backstreet is The Codfather, a foodie institution, where diners choose from a feast of freshly caught, sustainable seafood at very reasonable prices. There is no menu, but the friendly waiters, who take equal billing with the seafood, take diners over to the cornucopia of fish and seafood displayed on a wetbar, and propose a menu according to your budget, with the fish priced by its weight. Potatoes or rice and vegetables are included in the price. There is sushi, too, but nothing beats a seared tuna steak or grilled tiger prawn from Mozambique.

This rock’n’roll garage diner has a serious in-your-face attitude – the sign at the entrance says “fit in or fuck off” – and when your name is called out to collect what is the biggest, meanest burger in Cape Town, be prepared for some badass insults from the rowdy waitresses. Three eateries-in-one, Yard morphs from Mucky Mary’s, a gritty breakfast bar with stellar barista coffee, to the Bitch’s Tits, a lunchtime dinerette serving meaty sandwiches, to The Dog’s Bollocks in the evening, nothing less than hamburger heaven. Politically correct it isn’t, but the clients love it, and Yard, which literally is the driveway and garage of owner Nigel Wood, is packed out from Monday to Saturday. The house speciality is an awesome burger smothered with chilli con carne and cheese, perfect with its own craftbrew, Dog’s Bollocks pilsner hybrid.

With its spectacular views over Cape Town’s historic harbour and backdrop of Table Mountain, the V&A Waterfront is a sightseeing must-see. But the cuisine and prices of many of the waterside restaurants are often not as attractive as the views, which explains the runaway success of the V&A Food Market since it opened three years ago. Housed in a heritage red-brick Pumphouse, the vast interior has been filled with 50 enticing, eclectic street food stalls, and the place heaves with foodies seven days a week. All tastes are catered for, from theHungry Herbivore’s gluten-free vegan dishes to the challenging menu of Kubu Cuisine, which runs to zebra, crocodile and warthog. The Exotic Marigold Eatery, meanwhile, serves spicy chicken tandoori and vegetarian curries. Everything is cheap, cheerful and self-service, with bars offering smoothies, craft beer, wine and cocktails.

Be prepared for a riotous night of succulent barbecued steaks, pork chops, home-cured sausages and crispy chicken wings, accompanied by spicy chakalaka sauce, booming African or hip-hop music, and a lot of cold beer at this ramshakle venue hidden away in a backstreet parking lot of Woodstock. Amadoda has successfully recreated the ambiance of what is known as a shisa nyama, an informal barbecue party with meats grilled on an old fashioned braai, right in the heart of town. Expect to eat with your fingers, with a big plastic bowl of water on the table to wash sticky fingers.