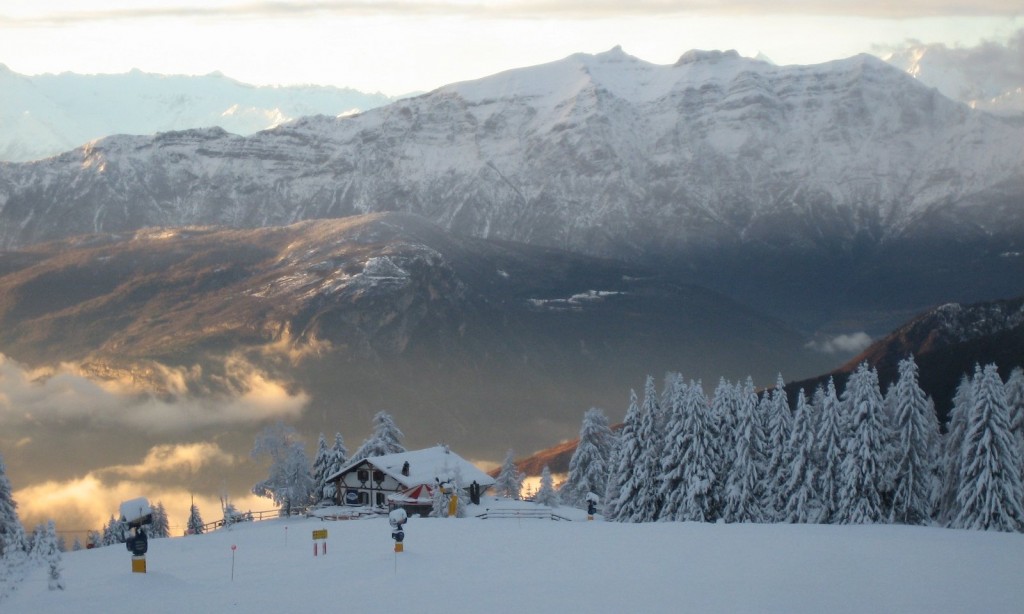 Only 95km or about 90 minutes from Verona airport, Folgaria is a mid-sized resort in the Trentino region of northern Italy that has a reputation for being in a snow pocket. It also has impeccable ski history credentials, as the first ski lift in Italy was built here, in the 1930s, and a full ski resort created shortly after the war.

Since then the pistes, accessed by chairlifts, have grown to cover 104km. About two-thirds of that is local to Folgaria itself; the other 30km is above the neighbouring villages of Lavarone and Luserna, a short bus ride away. Three new quad chairlifts for the 2013-14 season have connected Folgaria to the previously mothballed small centre of Fiorentini, over the regional border in Veneto. The lifts have enabled new runs – a 1.9km red and two blues (2.4km and 1km long) – to be created. The combined ski area is promoted as Alpe Cimbra.

When it comes to our ski resort choices each winter, we tend to be swayed by the big-name resorts with the impressive stats – hundreds of kilometres of pistes, dozens of fast comfy lifts and a vibrant après ski scene. So, despite being easy to reach and offering the type of authentic, unspoilt mountain village experience that many people say they want, with lower prices, quieter slopes and uncrowded bars and restaurants, in reality most skiers bypass Folgaria for the more famous Madonna di Campiglio and Passo Tonale, a couple of hours away. “Folgaria is a gem,” says Stuart McLeod of Zenith Holidays, which operates low-cost packages to the resort. “It is a short transfer from Verona with an excellent variety of slopes. It’s ideal for a mixed-ability group and perfect for beginners.”

On the slopes, the terrain is “classic Trentino”, with 37 flattering easy-to-intermediate red and blue runs carving down through the trees, plus a handful of short, testing blacks. Lift pass prices (and most other in-resort costs) are around half what you might pay in a big resort in the French Alps.

Located in the “great highlands of Trentino”, Folgaria is proud of its history and culture. You’re unlikely to hear English spoken here and in some bars it won’t even be Italian, but Cimbro, the ancient southern Bavarian dialect brought to these mountains by medieval settlers. It’s also reflected in the food culture: I tucked in to polenta with mountain mushrooms and the region’s famous Vezzena cheese at Rifugio Stella d’Italia, one of several family-run mountain huts. Pure local mountain honey is a key element of many of the desserts, including a stickily delicious strudel (there’s a honey museum down in the valley, ).

A handful of bars just the right side of lively, but offering nothing too raucous.John Caffè has been here as long as the skiing but has moved with the times and has a stylish lounge area with comfy leather seating and framed historic ski pictures on the walls. Apart from the obligatory après-ski beer, it is also good for a perfect espresso served with local pastries.

And apart from skiing?

Beyond the bars, restaurants and a few small hotel spas, the community is also seeking to diversify into dog-sledding and the latest craze “fat biking” (mountain bikes with oversized but under-inflated tyres to grip on the snow). There’s also special effort made for families, with a new Kinderheim nursery and a great little terrain park.

Where do I eat?

Ticking off more of the Italian staples in downtown Folgaria, I found the chocolate and pistachio ice-cream sublime at La Baita del Gelato, and the formaggi misti pizza, made with local cheese (€6.50) authentic and wonderful at Pizzeria Cheizel.

Where do I stay?

The modern three-star Luna Bianca hotel is one of the most popular in Folgaria, with spacious, clean rooms, good facilities including a sauna, and a reputation for good service. The ski bus stops outside the front door. Half-board doubles from €360 for three nights in mid- December.

Good for Families, beginners and Intermediates.

Costs Lift pass Up to Christmas, as low as €163 for an adult six-day pass. Peak price is €209 over Christmas and new year. Children under 8 ski free all season. Beer €4.50