Move over McDonalds and Burger King, London is fast becoming the capital of some of the best burger chains to be found anywhere in the world. It seems when it comes to meat in a bun it’s the USA style of hamburger that Brits want to see. Here’s our Top 10 to choose from.

There are three restaurants to choose from in Covent Garden, the Kings Road and Canary Wharf, of the chain that first started some 22 years as a homage to the 19th century crab shacks and Bar.B.Q chains of the American Gulf Coast. The beef here is both the best of British and USDA prime imported whilst the pork comes from distinguished breeds such as Saddleback, Large Black and Gloucester Old Spot. BBQ is as big as the burgers here with a choice of sauces and dishes cooked either the Kansas, Memphis or Texas way.

Two to choose from here either on Wardour Street in Soho or the Kings Road in Chelsea. Established in 2010 BRGR.CO offers good solid, benchmark burgers, as well as sliders (beef, crispy chicken and salmon) and hot dogs. Steaks, particular hanger, are also offered burger-style. A selection of iced teas adds the to American appeal.

This is one of the many burger outposts that started life as a pop-up van serving burgers to discerning customers before finding a permanent home for itself. After stints at Battersea Power Station, Street Feast’s Dalston Yard and Hawker House, Hot Box has set up its industrial smoker in Spitafields. It offers a wide selection of burgers, backed up with good BBQ treats such as smoked beef rib tacos and scotch bonnet ribs

This is classic US diner-style burgers down to the distinctive black and white menus and a range of burgers with a slight Mexican twist. It also offers a good selection of hot dogs too. Based in Dalston it is another hip East London burger joint which unusually for a burger outlet also offers an extensive wine list with a wide choice of Californian and Argentine wines in particular.

Shake Shack started life as a hot dog cart in Madison Square Park in Manhattan, New York back in 2004. After spreading its wings across America it is now taking on the world and is firmly established in London with outlets in Covent Garden, Tottenham Court Road and Stratford. Again burgers and hot dogs are the order of the day here with the burgers coming from 100% Angus beef served on a potato roll. 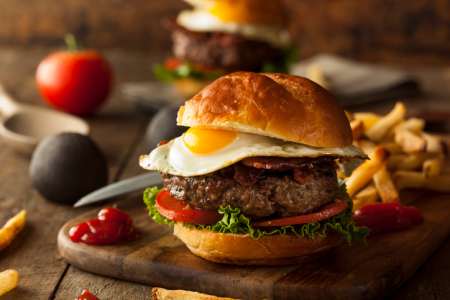 Founded by Martin Williams former managing director of Gaucho Grilll, the Argentinian steak restaurant chain, this is a homage to a beef from around the world including the US, Japan and South Africa. Whilst steaks are the real attraction here, its burgers are fast gaining a strong reputation amongst aficionados. And you would struggle to find a more impressive grill room to eat it in. It has the added advantage of a wonderful wine list and its own wine shop where you can buy a bottle to eat with your food.

If you have a jaw as wide and as accommodating as Shaggy in Scooby Doo then this is the place for you. Burgers are piled up high here with seemingly a whole roast dinner complete with gravy going in to some. But as it takes two days just to make one pot of gravy it is worth pouring it on. Dip & Flip has made south London its own. Starting out on Battersea Rise there are now restaurants in Wimbledon, Brixton and Tooting.

Champions of British meat, Hawksmoor now has an impressive line up of restaurants across London, and is set to open in New York and show the Americans what it can do. Again steaks are the main draw here, but if you can cook a decent steak, then a burger comes naturally to the chefs of Hawksmoor. Expect the best British meat and classic toppings.

Another roving pop up that was at the vanguard of the street food scene, MEAT Liquor is now arguably the coolest, hippest and loudest burger joint in town. As the name would suggest the emphasis is squarely on the MEAT. It has different restaurants in London, the main MEAT Liquor just off Oxford Street, MEAT Market in Covent Gardent and MEAT Mission in Hoxton. But be warned such is the nightclub vibe and pumping music that is a burger chain people will willingly queue (for a long time) to get in to.

Again another burger chain that attracts queues of fans whenever it opens up a new venue. It started its life in Brixton but popular demand has seen it open up a host of venues across the capital, each time causing an avalanche of publicity as streets come to stand still as burger fans queue to get in. If you want to see what the fuss is about head to either its original in Brixton or check the website for your nearest site which includes Soho, Kings Cross, Oxford Circus, Portobello, Tooting, Clapham and Liverpool Street.