Well! It’s never too late to find out the Florence’s fabulous and yummy food. Today, I will share the Other side of Florence and our guide Gaia to eat our way around the two main areas of the Oltrano, Santo Spirito and San Frediano.

The Oltrano is a working class area. Many families have lived here for generations. Family members still run their parents or grandparent’s shops. The sense of community is strong especially amongst this older generation. 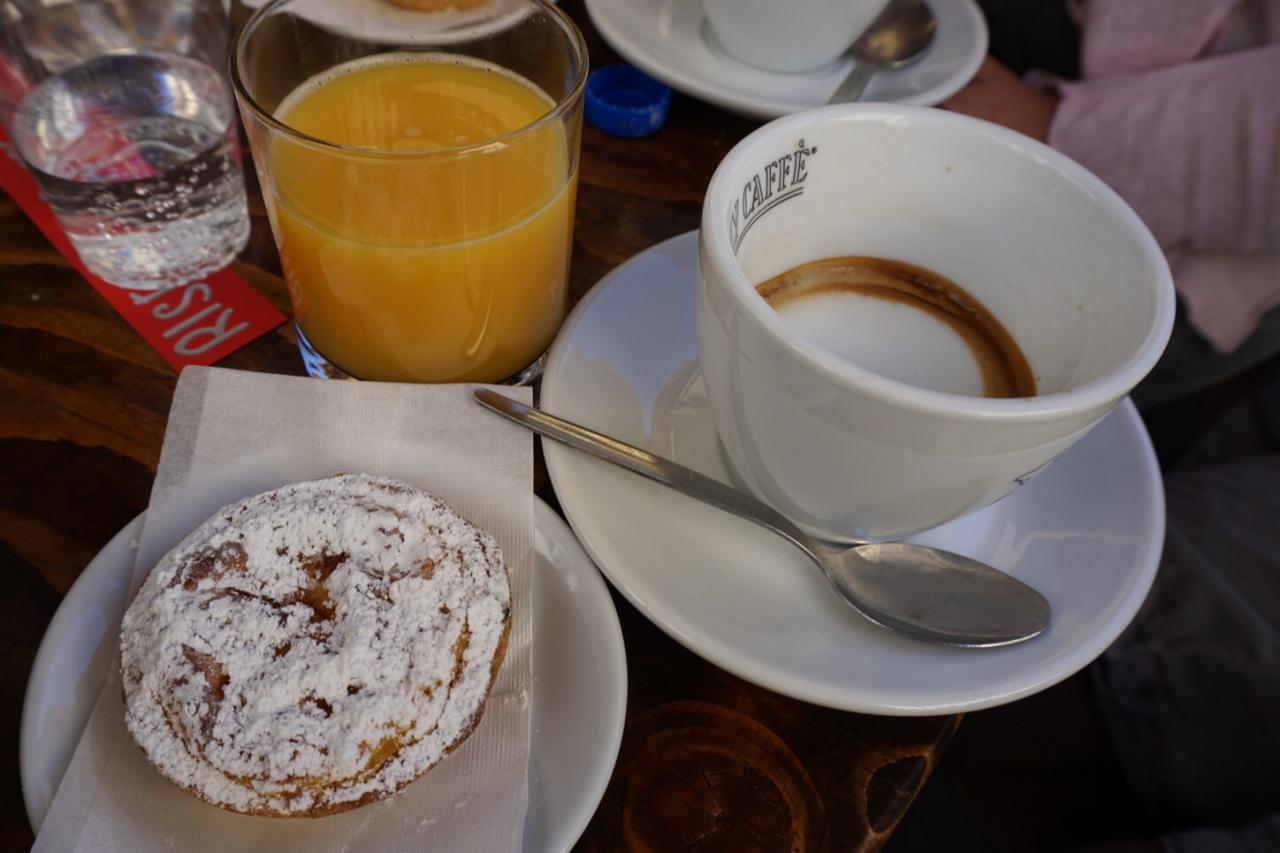 Our day started as any Italian day would…with coffee and a sweet pastry!
The budino di riso is a typical Tuscan pastry…a pastry base filled with vanilla rice pudding.
Gaia explained that sweet tastes are for breakfast and savoury for later so there was no need to feel guilty eating a pastry. Coffee rules are simple too. A cappuccino is only ever a morning drink. Never drink one after lunch or dinner when a macchiato is the coffee of choice. This can be either served in a small cup or a large cup (tasse grande)

With our coffee drunk and the joys of eating sweet pastry’s for breakfast discussed, our tour continued as we headed off to the macelleria or butcher shop. 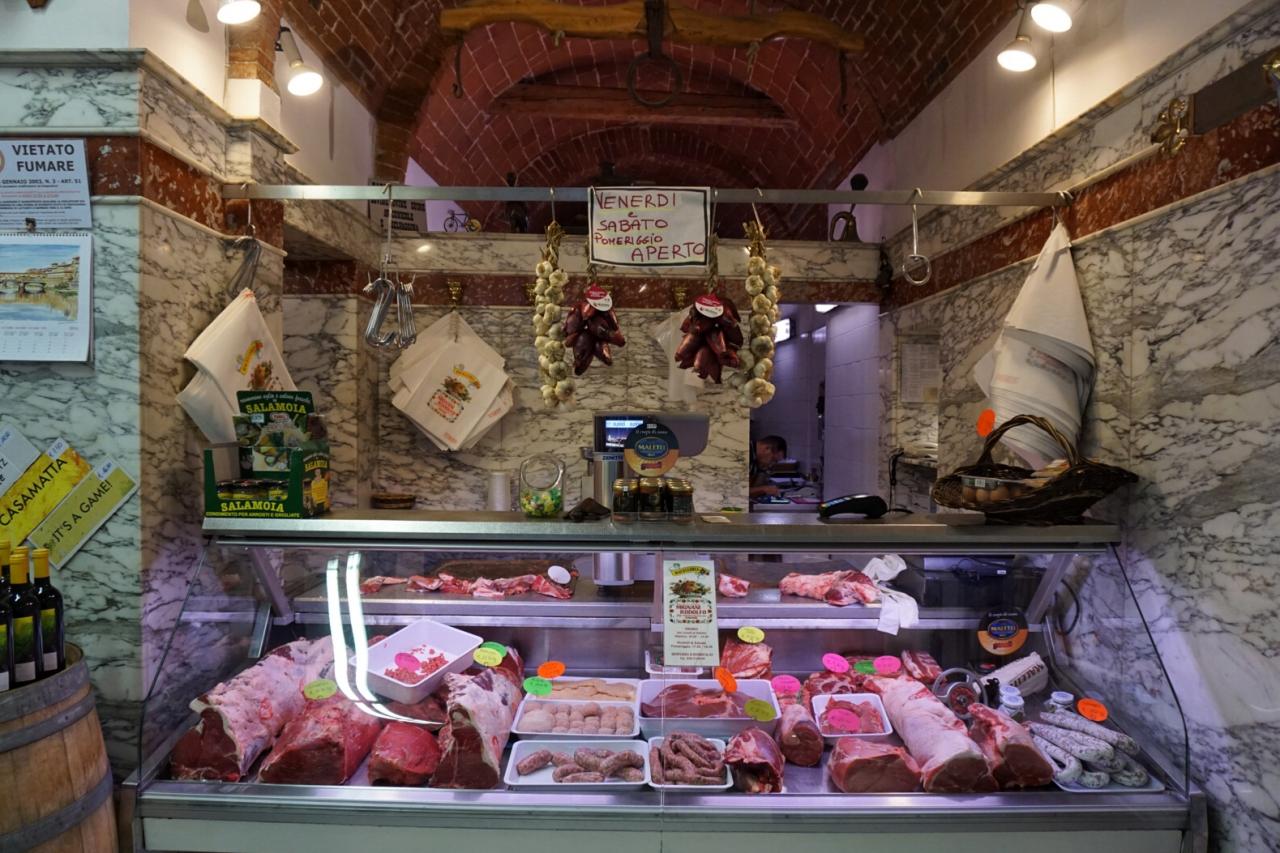 Butcher shops will never look the same again. In this butcher shop, 100 year old marble covers the floor and lines the walls. The wooden beams and arched bricked ceilings bear testament to a long history. Alessandro and his partner, Donatella, have made sure that the business has stayed the same as when Alessandro’s father had it in the seventies. At this time it was across the road. Alessandro was sixteen when he started working for his father and remembers the move. Thankfully they were able to bring with them the original fittings, such as the old silver meat hooks that now hang from rods decorated with the symbol of Florence, the lily at the ends. 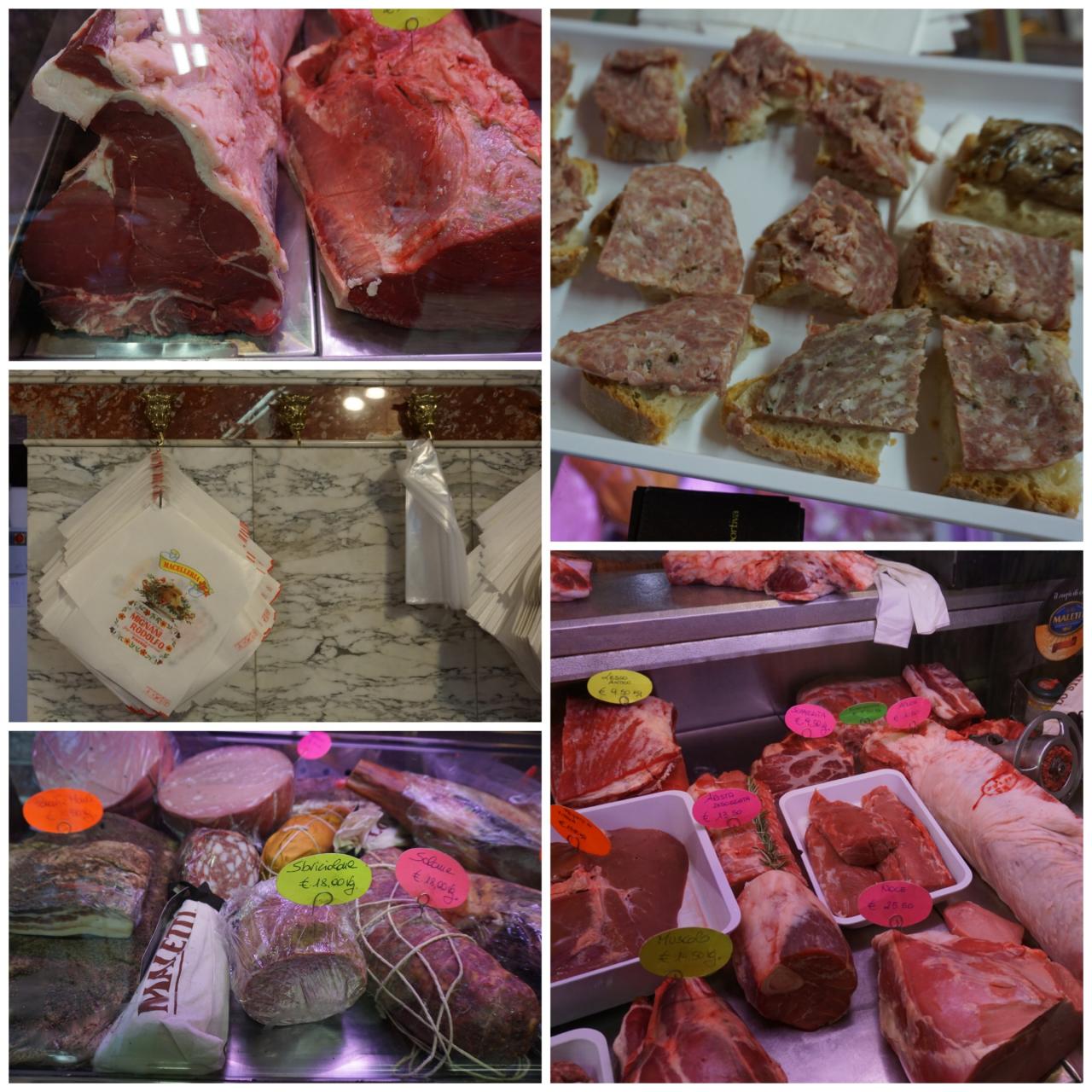 Large steaks fill the cabinet, home made sausages and slabs of guanciale wait for buyers. Locals have been buying their meat from here for forty years. Alessandro now has a delivery man who will take orders to those that can’t come to the shop anymore. We witness this wonderful sense of community at work. 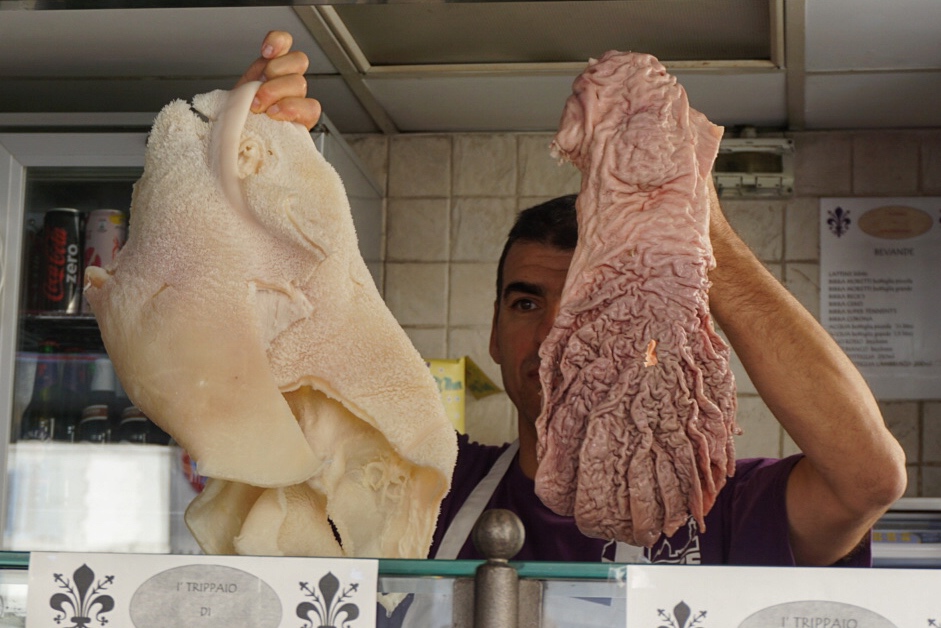 Tripe is Florence’s most famous street food. Tripe is from the lining of the first three stomachs of the cow. What happens to the fourth and real stomach?
Lampredotto is made from this. This delicacy can only be found in Florence. It was originally a working class food but today is found everywhere…even on the brunch menu at the Four Seasons Hotel.

Our lampredotto guru, Simone makes a wonderful lampredotto!
He boils his lampredotto for hours before it is cooked in a pan with onion and tomatoes and then chopped to be served in a panino bun. Simone adds parsley, salsa verde, extra virgin olive oil, capers and chilli oil to make a delicious roll.
Do you like your lampredotto wet or dry.? Wet..Dipped in broth is best! 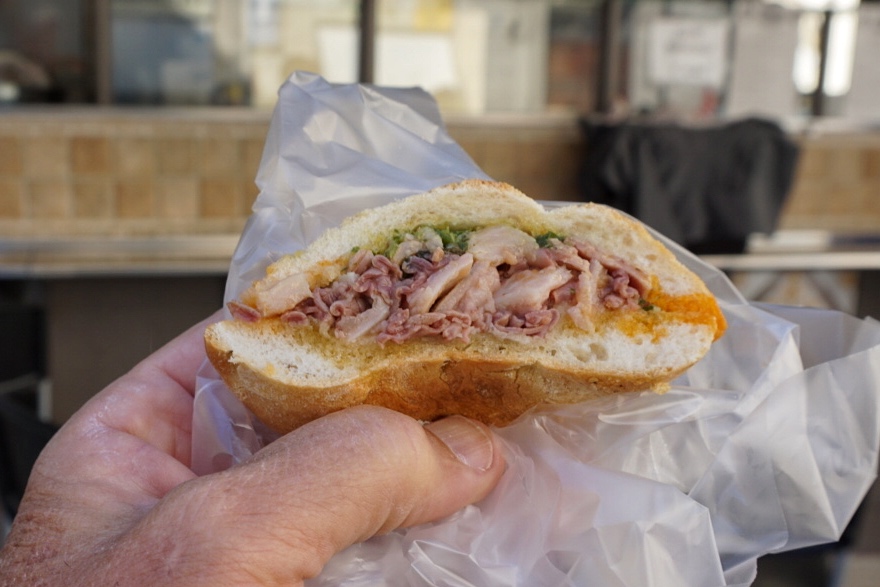 I must admit I had never tasted lampredotto before the tour. Very naughty of me but the thought is definitely far worse than the taste. In fact it is delicious! I really enjoyed it and will definitely eat it again. Try it…you’ll be surprised!

Pasticceria Buonamici is a family business that has been going since 1949. Grandfather Bruno’s wife was originally running a grocery shop and when Bruno decided he wanted to open a pastry shop he was relegated to the back part of the shop. Very quickly Bruno’s cakes and biscuits became so popular in the neighbourhood that he took over the whole shop which is now run by the third generation. 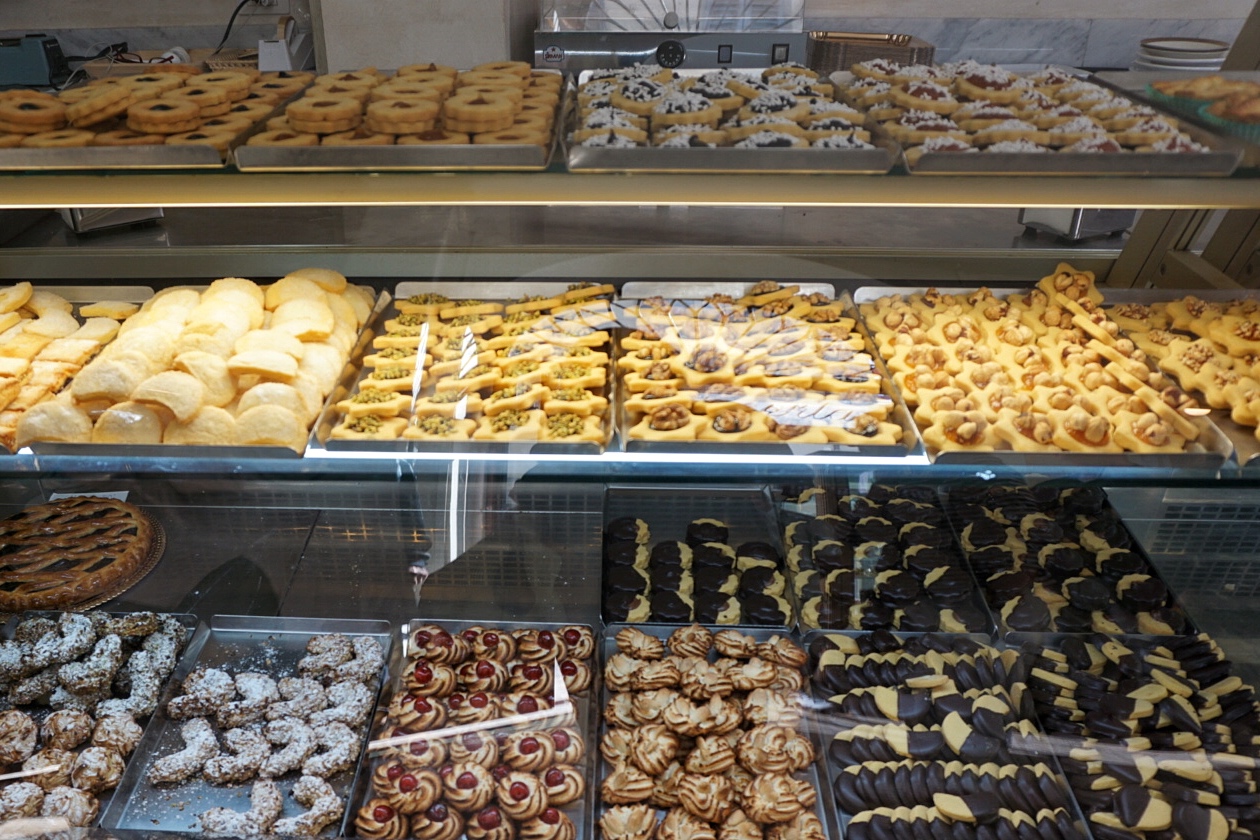 Different types of pastries are eaten at different times of the day. They are also displayed in these groups. There is a wonderful selection of biscotti or biscuits to choose from for your afternoon tea. The sweet deserts on the other side are for early morning eating.
Roberto, Bruno’s son who has just retired himself says that many kids would knock on the door on their way home from the clubs to ask for a warm croissant! The smell of freshly baked pastries must be so tempting at that time of the day. 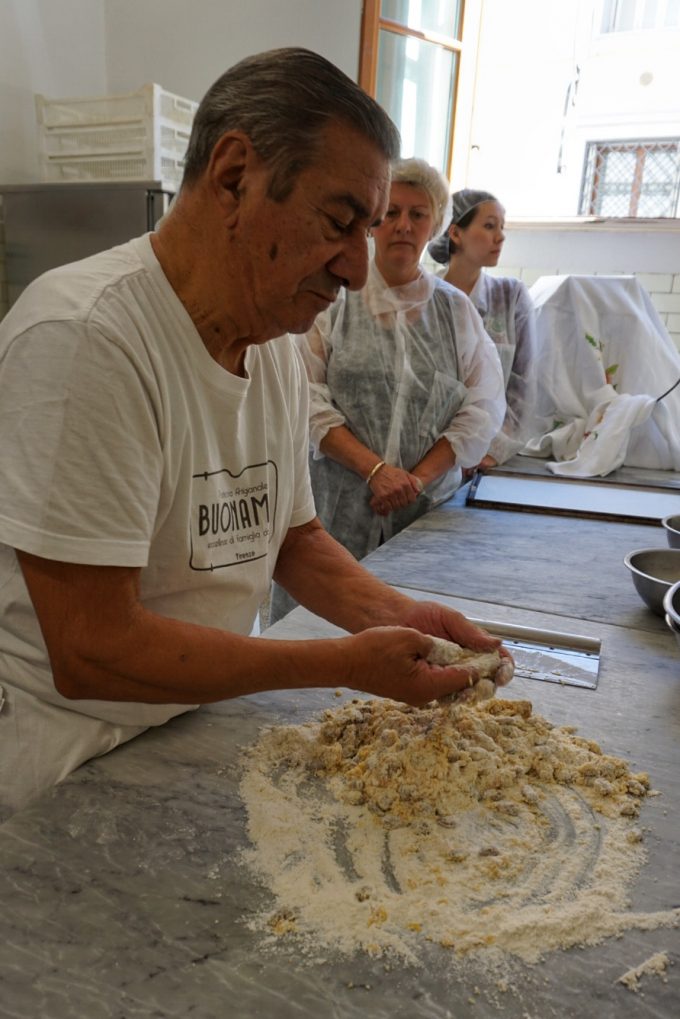 Cantucci are another type of biscotti…one that can be kept for months!
We watched as Roberto mixed the ingredients by hand to the perfect consistency and then shaped the rolls ready for the oven. Cantucci are one biscuit that can not be eaten straight from the oven so Roberto had one that he’d made earlier that morning ready for us! 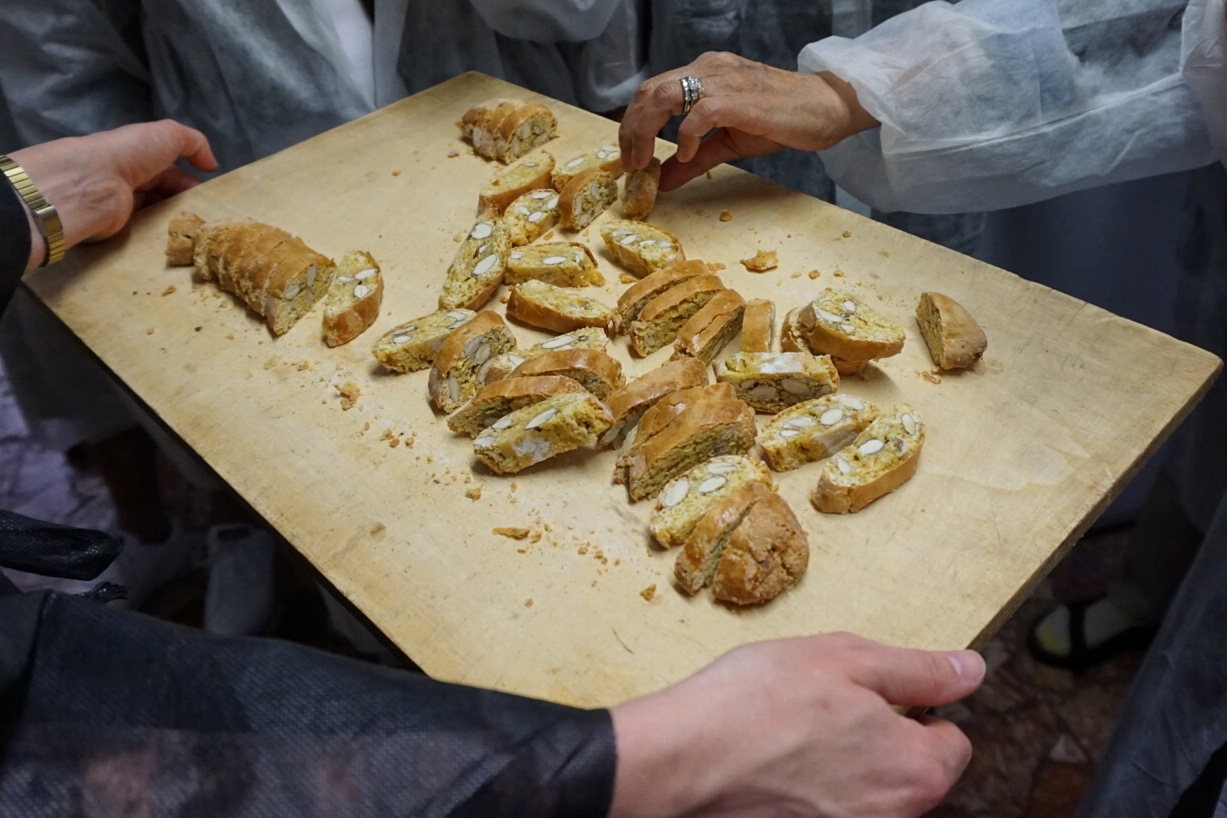 The secret of a good cantucci is to use the best ingredients. The almonds are the freshest you can buy and the pistachios came from the Bronte in Sicily where the best are grown.
Of course Cantucci go well with Vin Santo…that wonderful, after dinner wine that was made by monks as communion wine.
Photos on the wall of the shop show the devastation of the 1966 floods when water flooded the shop to quite a high depth. But the family worked through these hard times and today the bakery is in the hands of the Roberto’s daughter Rosella with her son already learning the ropes. 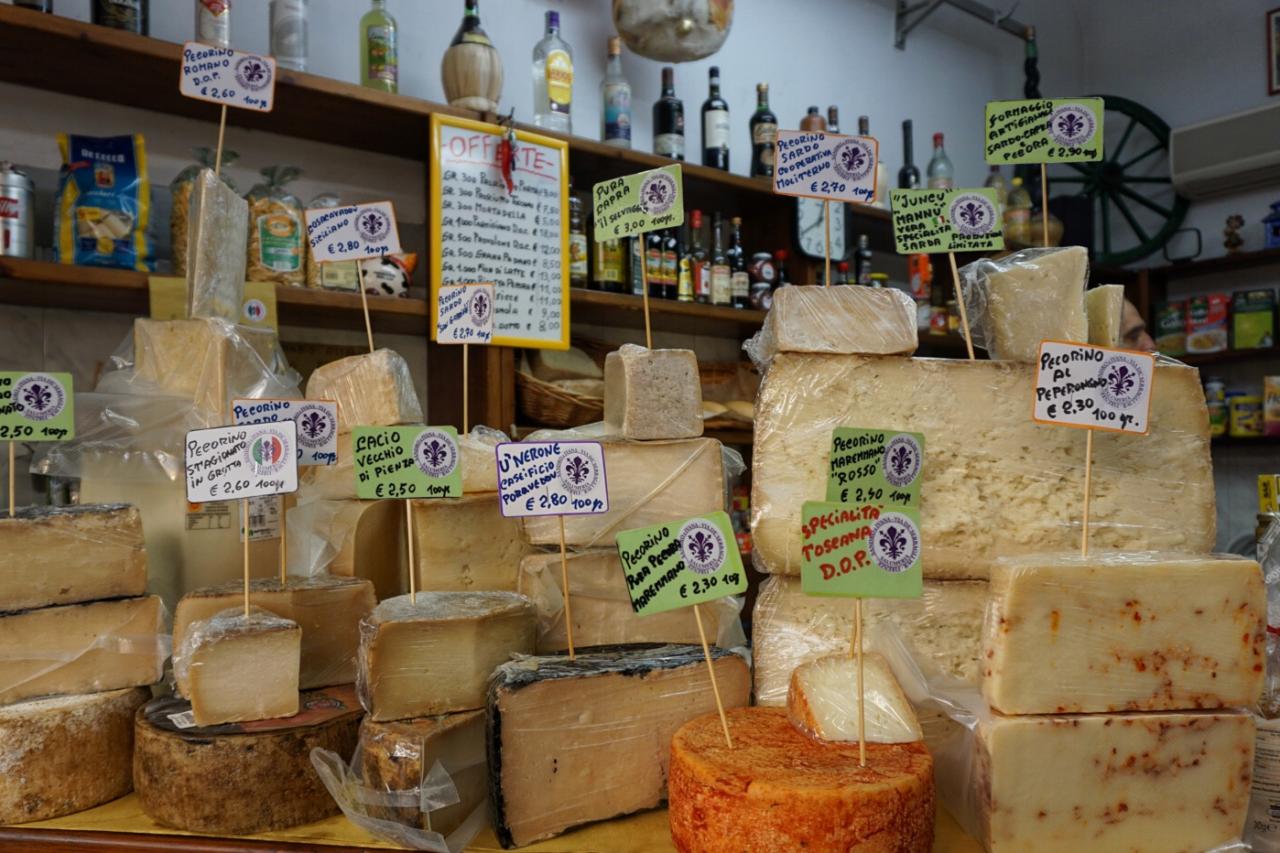 When Marzio was ten his father asked him to sort cheese. This was the start of a love affair with cheese. He left home at nineteen but his job was still in cheese. Finally he returned to Florence and took over the family business. Open the door to this fabulous little shop and the wonderful aroma of cheese and cold cuts greets you. 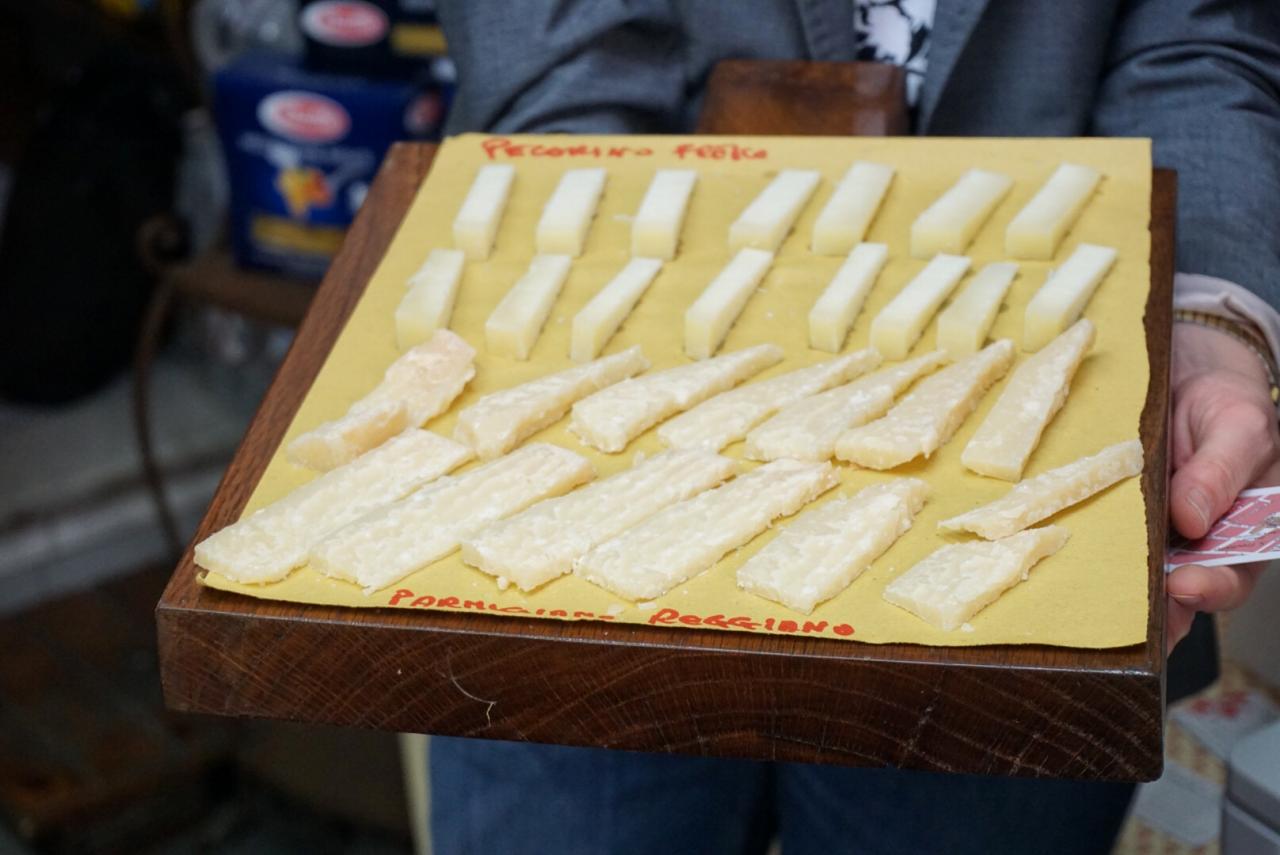 Pecorino is a sheep cheese. Each region has its own version so hence you can have pecorino romana, pecorino toscana etc. Fresh pecorino can be eaten a couple of months after it has been made. Leave it a while longer…within 6 months and the taste of this semi fresh cheese will have matured slightly. A mature cheese is obviously kept longer than this and has a stronger taste. Each stage has its different but equally delicious taste. 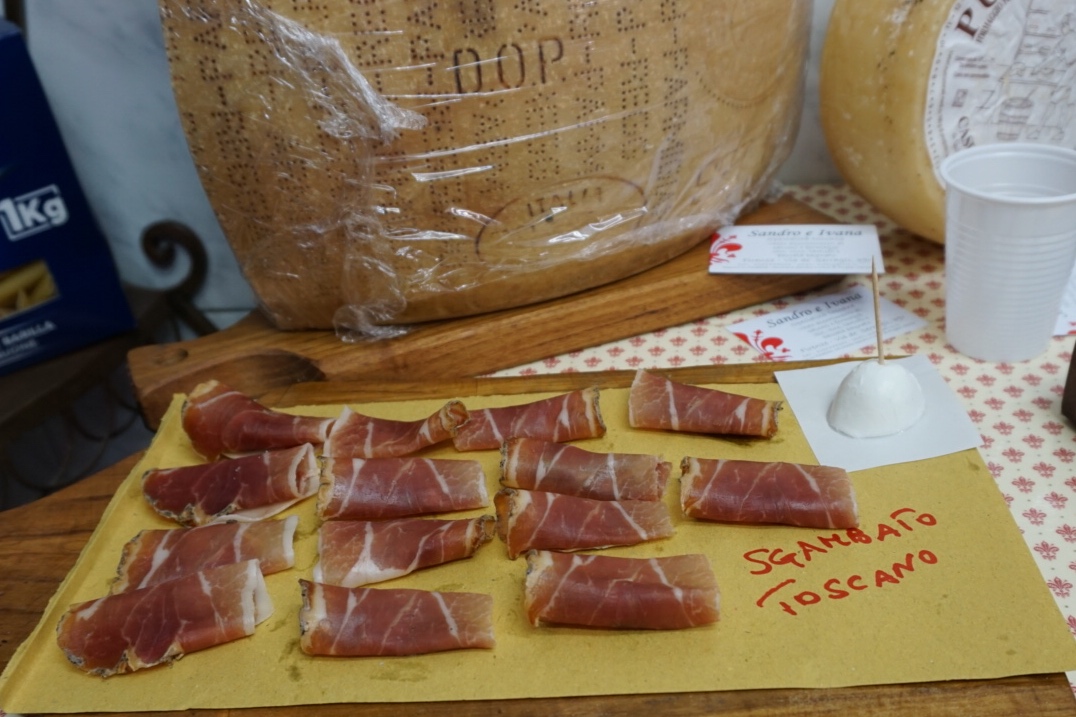 Parmigiano Reggiano has a different story. It can only be made in the region between Parma and Reggiano. It is a hard granular cheese, suitable for grating and to have on a cheeseboard. A young cheese is eaten between 12-20 months and has a very different taste to an older parmigiano. The more white dots in your parmigiano, the older it is. I can recommend serving it with honey or a fruit marmalade. I also love it drizzled with a top quality balsamic vinegar!

When I think of pecorino or parmigiano in Italy, I almost always think of prosciutto…..proscuitto crudo that is. The best is from Parma and is marked as Parma ham. You can tell the difference easily as Parma ham has the bone whilst the Tuscan ham is not kept on the leg and is covered with spices. 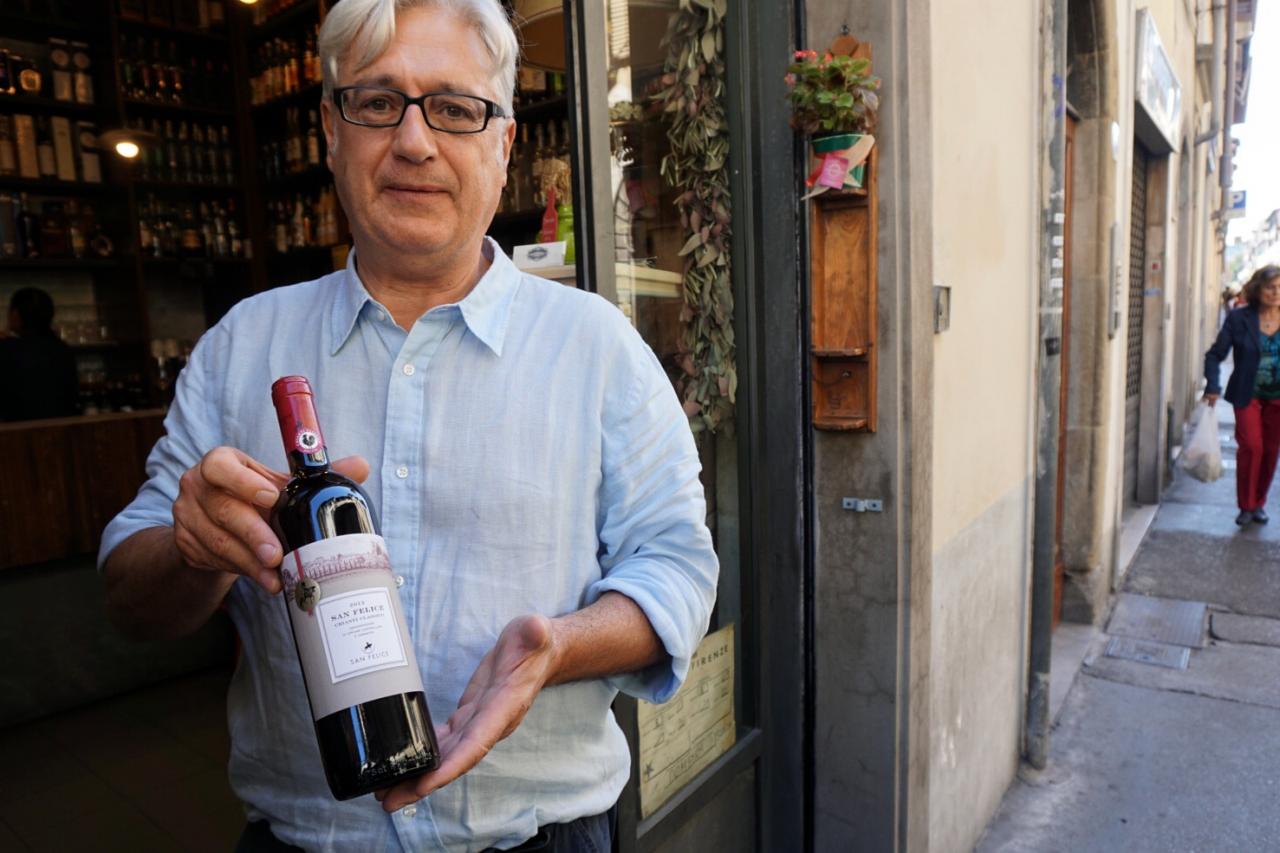 Luca with our bottle of chianti 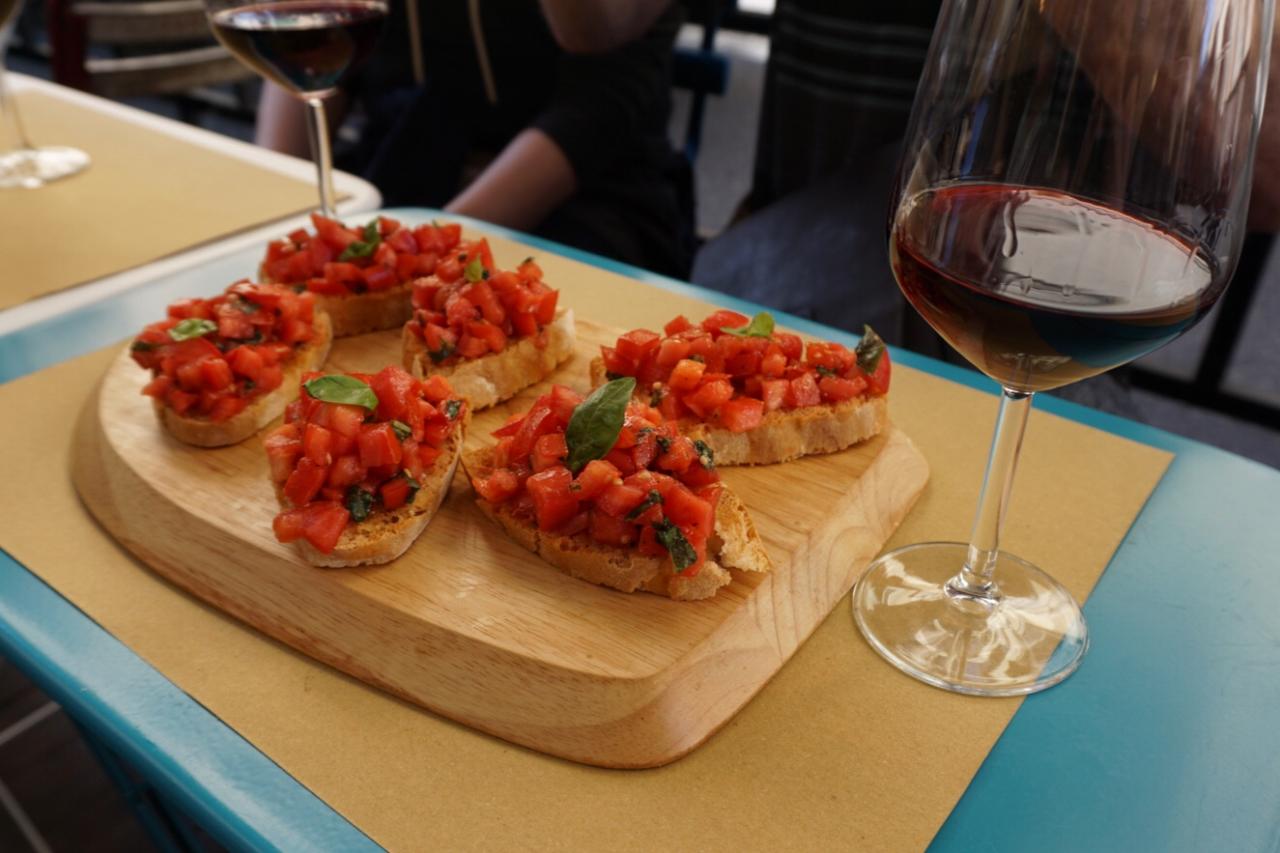 Prosciutto and cheese…there’s something missing. Vino of course! Thankfully just a few doors up is a fabulous enoteca where we learnt all about Tuscan Chianti wines, their D.O.P status and the meaning of the black rooster that is on all chianti wine bottles. Luca had also made bruschetta pomodoro for us to nibble on as we tried his San Felipe 2013 chianti. The perfect antipasti before lunch.

Have you ever heard of the game of Calcio Storico. Don’t worry, we hadn’t either but we soon learnt all about it and met a star of the game in a nearby trattoria that three calcio playing friends owned.

The original owner of the trattoria was a boxer and a player and after he died the tradition of the restaurant’s interest in the sport has continued. The coat of arms of the neighbourhoods teams still decorate the walls. 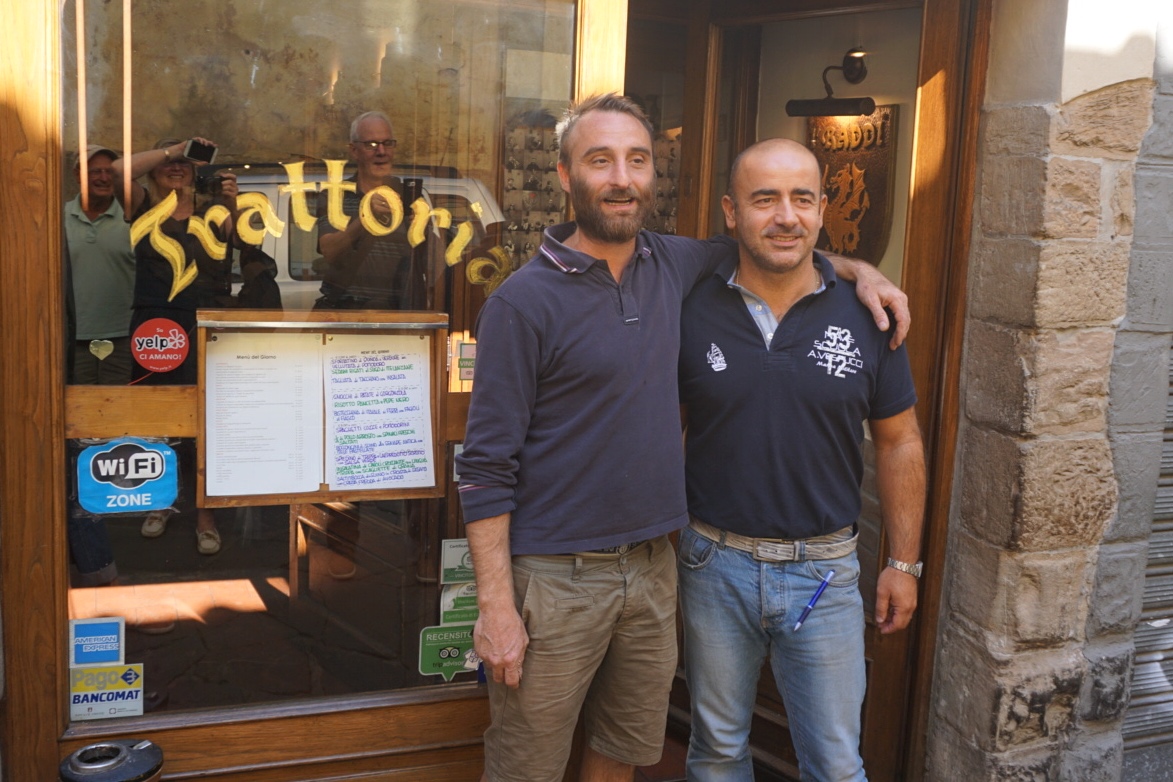 Calcio Storico is an early form of football that originated in the 16th century and more specifically in the Piazza Santa Croce where it is still played every June. Four Florentine teams, each with twenty seven players compete. Players are chosen based on their specific skills. If you are you a champion boxer, wrestler or athlete, you’ll get a game though each team is only allowed two overseas imports! The team that scores the most goals wins. There are basically no rules! The only rule is that you can’t attack the guy with the ball but you can literally attack everyone else…fights are an important part of the game. The six referees are there mainly to see that no one is mortally injured! A crazy game! 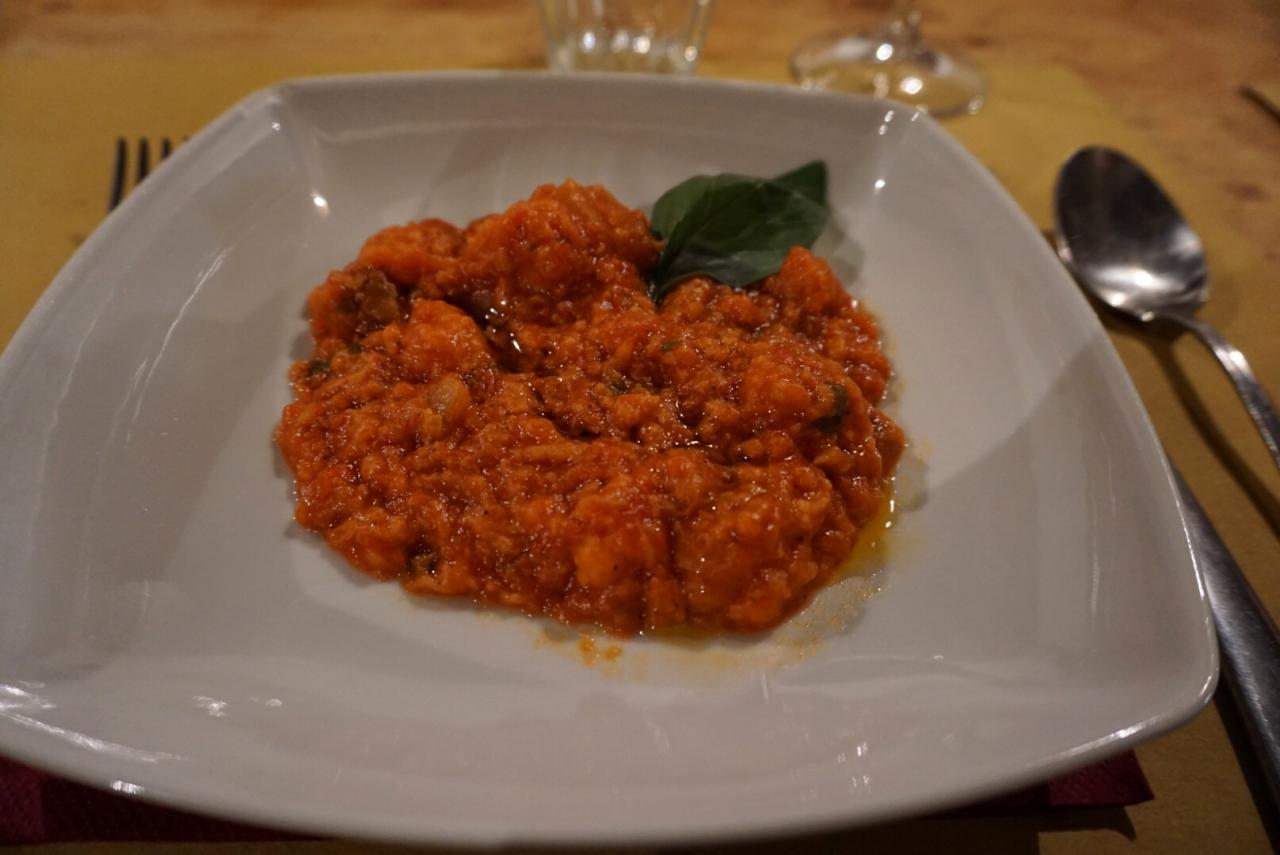 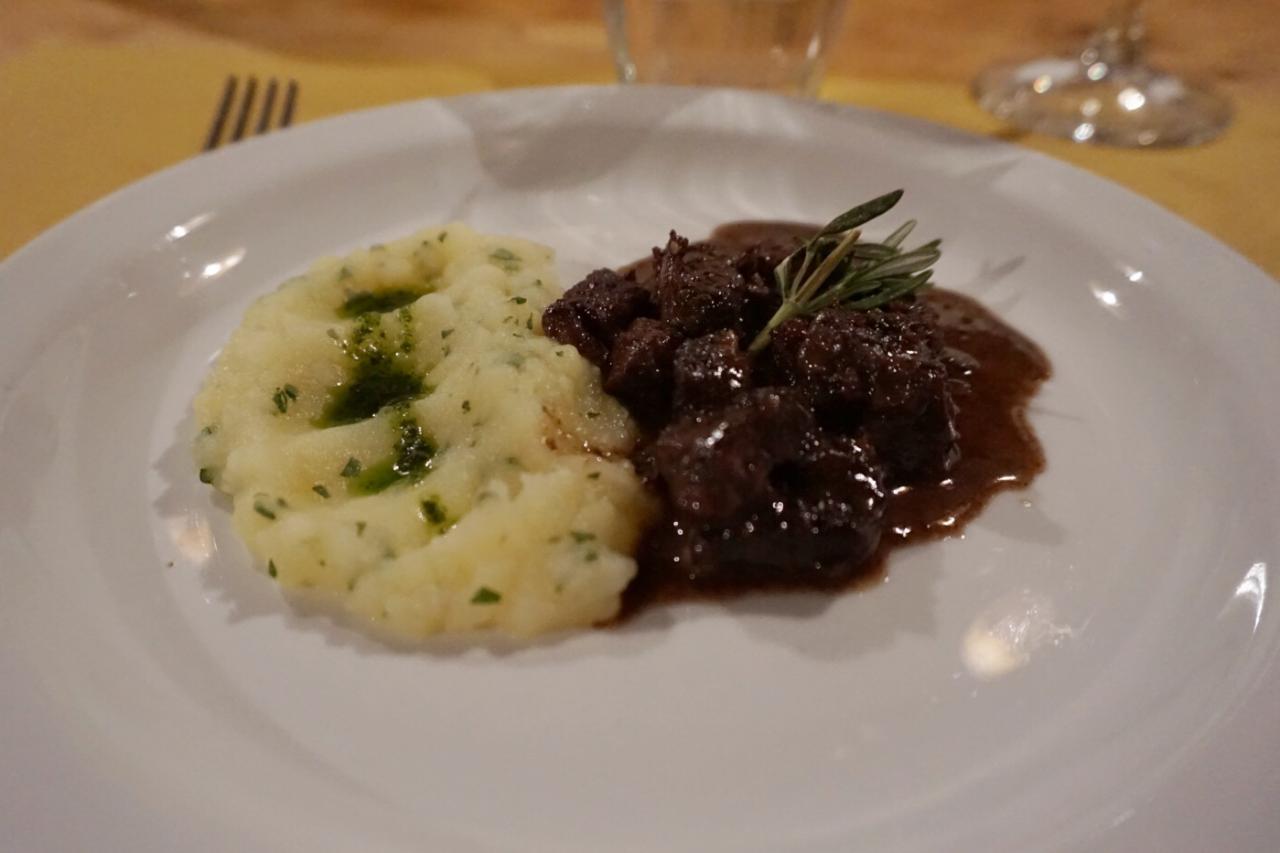 As well as play Calcio Storico, the guys know how to run a restaurant! The food is great! We feasted on Pappa al pomodoro, a delicious local dish made with tomatoes and bread that has risen above its peasant food status to now grace restaurant tables. We also ate Peposo, a slow cooked Chianti beef dish that has been cooked in red wine, garlic and black pepper in a terracotta pot. Delizioso!

Everyone knows everyone here…the community is alive and well
Even the wife of the original owner popped her head over the balcony as we gathered outside! 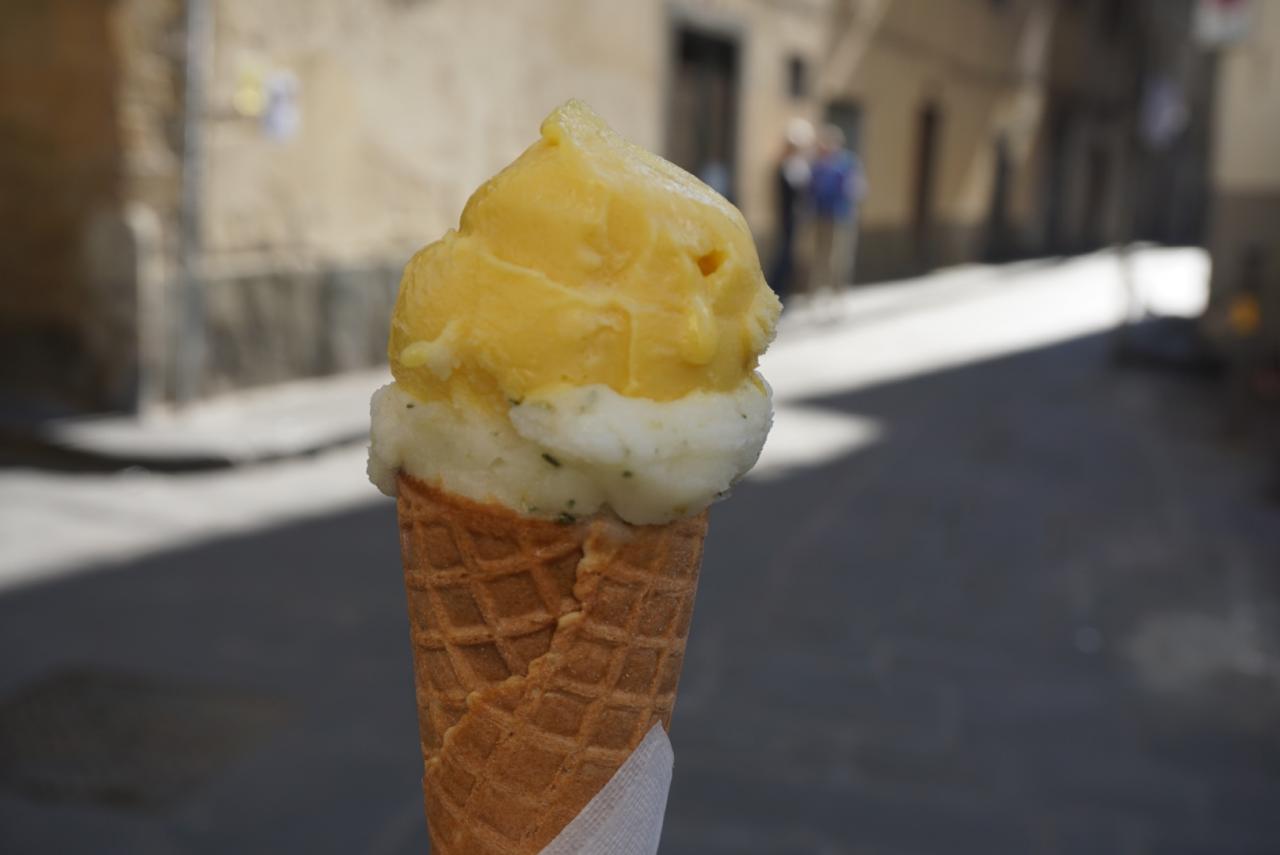 An Italian food tour can’t finish without a gelato! Every neighbourhood has a gelato stop and in the Oltrano, ours is one of the best!

In this tiny little shop, the gelato is hidden under lids. There are no big air filled mounds of brightly coloured, so called gelato that tastes nothing like the real deal! Here the flavours are all hand made and exceptional. My mojito tastes like a mojito and passionfruit is so good we go back the next night. I’ll be back again before we leave to try the bench mark pistachio and another favourite, zabaglione.