Friuli, Italy, Guide: What to See Plus the Best bars, Hotels and Restaurants

This border region of north-east Italy has stayed out of the limelight but offers dramatic Alpine scenery, gorgeous Adriatic lagoons, and a wealth of local wine, fine cuisine and history.

Driving east from Venice along the autostrada, it only takes half an hour to leave the tourists behind and cross into the very different world of Friuli. This autonomous and proudly independent region is officially known as Friuli-Venezia Giulia, a wild and still little-known corner of Italy that has its own language, a distinctive local cuisine, and a host of world-famous wines grown on rolling hillside vineyards. Strategically located at the crossroads of central Europe, Friuli stretches over Italy’s north-eastern border, from the lagoons and sandy beaches of the Adriatic coast to the grand maritime port of Trieste, along the frontier with Slovenia, then up into wild Alpine scenery and the border with Austria. The first visit here can come as a surprise, compared with Tuscany or Umbria. But it is so easy to fall under the charm of the unspoilt landscape and the warm welcome that many travellers find themselves returning.

Just as Friuli is very different from the rest of Italy, its capital, Trieste, is unlike other Italian cities – more Mitteleuropa Vienna than Venice. Over the past few years, it has been transformed from a gritty frontier crossing point to a vibrant multicultural hub. Let the monumental grandeur of Piazza Unità d’Italia impress you, but then fall under Trieste’s more subtle charms: antique stores in the narrow lanes of the ancient Jewish ghetto, a promenade down the lungomare(seafront), or just a seat at one of the waterside cafes that line the Canal Grande for an sundowner aperitivo.

The Adriatic coastline stretches north and west of the city encompassing the family-oriented beach resorts of Grado and Lignano. But the main attraction is the awesome natural beauty of immense lagoons that hug the coastline. Visitors should explore the waterside walking and bike tracks of Valle Cavanata, by Grado’s lagoon, a natural paradise for wild birds, or head to Marano Lagunare and either follow a guide through the Valle Canal Nuovo nature reserve, or sail across the lagoon in a tour boat, past distinctive casoni, white-thatched fishermen’s cottages seemingly floating on the wetlands. Just inland, there are the breathtaking Roman mosaics of Aquileia’s Unesco-listed basilica.

For the freshest fish and seafood in Trieste, it is worth splashing out on the gourmet Ristorante Al Bagatto (mains from €25, Via Luigi Cadorna 7, +39 040 301771, albagatto.it). A guilty pleasure not to be missed is a plate of succulent pork (porcina) smothered with grated horseradish in a traditional spit-and-sawdust buffet bar such as Buffet Da Rudy. Health-conscious foodies are saved by the newly opened 040 Social Food, which offers big organic salads or grilled octopus, topped with creamy jerusalem artichoke. Grado has some great, but often expensive, fish restaurants, but an affordable option is a fritto misto of baby squid, anchovies, sardines and red mullet at the waterside Osteria Zero Miglia.

Trieste is famed for its opulent literary cafes and, to soak up this belle époquegrandeur, visitors should order cappuccino and sachertorte at Caffè San Marco(Via Battisti 18), James Joyce’s favourite hangout. The historic city centre is thronged by partygoers hopping from bar to bar, from the early evening aperitivotill late. Caffè Urbanis serves the best Aperol spritz with live DJ sets, while Super Bar Stella (Largo Pitteri 4) has great Friuli wines and craft beer, live music and closes at 3am. In Aquileia, after marvelling at the mosaics of the cathedral, let yourself be tempted by the dazzling array of pastries at Pasticceria Mosaico– perfect with a chilled glass of prosecco.

Hotels can be expensive in Trieste, so it’s worth booking a reasonable B&B, such as the comfortable Residenza le 6A (doubles €70, residenzale6A.it), or venturing just outside the city in the rural Carso plateau at Azienda Agricola Lupinc(doubles from about €80, lupinc.it), a winery that has a garden restaurant and osteria, with four comfy apartments. Down the Adriatic coast, there are breathtaking sunrises to be viewed at a hostel right in the middle of the wetlands, which is at the Isonzo nature reserve’s visitor centre. Alternatively, Albafiorita is a rustic agriturismo, where the young owner’s mamma bakes cakes, tarts and flans each morning for breakfast.

Right at the beginning of the Collio wine route, visitors should wander past the medieval arcades and baroque palaces of one of Europe’s unique border cities,Gorizia, divided in half since the Cold War from Slovenia’s Nova Gorica. The entrance to the town of Cividale could not be more imposing, crossing over the majestic 15th-century Ponte del Diavolo, with the turquoise river Natisone flowing far below.

While this still grandiose town was officially founded by Julius Caesar, its roots go back further to the Celts and Lombards (known as Longobardi) vividly documented in the outstanding Archeological Museum, which stands in the imposing Piazza del Duomo. The scenery changes abruptly a half hour’s drive from Cividale, when narrow roads branch off into the wild wooded valleys of Natisone, perfect for hiking, mountain biking and trout fishing.

Expect generous portions of traditional, no-frills friulano cooking served in family-run osterias and agriturismos that open up as restaurants at the weekend.Agriturismo Stekar  is a perfect example, serving delicious goulash, fruity plum gnocchi and home-cured sausages, accompanied by the farm’s own artisan wine and beer. The cosy oak-beamed osteria Terra & Vini is always packed with Collio viticoltori, feasting off tagliatelle with wild boar ragù, while in Cividale the latest hot address is Osteria alla Speranza .

The cuisine of the Natisone valley is a mix of Italian and Slovenian influences, ideally illustrated by a long, lazy Sunday lunch at Trattoria alla Posta in the frontier village of Clodig. The wonderfully creative chef, Maria Gilda, serves an eight-course tasting menu for a mere €30, with dishes such as stinging-nettle ravioli, slow-cooked veal cheeks with wild mushrooms and a to-die-for grape strudel.

Where to taste wine

Friuli produces some of Italy’s greatest white wines, from crisp friulano, the local favourite, to mineral malvasia and luscious late-harvest picolit. Winemakers generally give visitors a warm welcome, though it is always best to give them a quick telephone call before turning up. A good place to kick off in the wine-making capital, Cormòns, is at its eponymous enoteca, a pulsating bar with over 100 local vintages by the glass. Just out of town, Renato Keber has an ultra-modern winery and bucks tradition by ageing whites, such as pinot bianco and ribolla gialla, for at least five years. A far more rustic address is Vini Crastin, a tumbledown garage winery in a tiny hamlet where the affable Sergio Collarig makes uncomplex and affordable wines, available in bulk as well as by the bottle – rare for Friuli. The wine route continues towards Cividale where, perched atop a hill, Vignaioli Specogna, surveys the vineyards of the Colli Orientali, Friuli’s eastern hills, that stretch into the distance as far as the eye can see. There is invariably a raucous crowd around the cellar table as the imposing figure of Graziano Specogna and his son, Cristian, open bottles and slice salami and cheese. The pinot grigio is unforgettable.

The vine-clad hills of the Collio are filled with inviting winemaker B&Bs. Marzia Buzzinelli of the rustic Gallo Rosso cooks up a storm at breakfast, while at Ronchi Rò delle Fragole, Romeo and Carolina Rossi have beautifully renovated an ancient hilltop stone farmhouse. For a more luxurious stay, book Relais Russiz Superiore, a grand manor house with idyllic vineyard views as far as Slovenia. To explore the Natisone Valley, check in at the old-fashioned Albergo Al Vescovo, with mountain vistas, a riverside terrace and hearty regional cuisine. 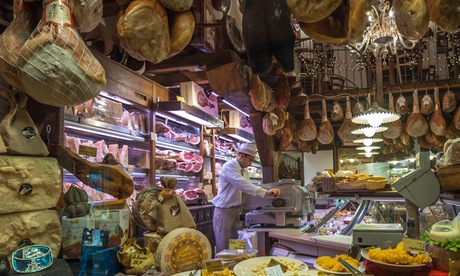 Udine is the undiscovered jewel of Friuli, a grand town of Venetian-Gothic palaces and Palladian churches, undisturbed by crowds. Walk from the magnificent portico-lined Piazza Libertà, across to Piazza Matteotti, the buzzing unofficial town centre, then visit the palatial home of Udine’s bishops, now theDiocesan Museum, with a series of galleries covered with frescoes by Giovanni Battista Tiepolo. Friuli’s big foodie stop-off is San Daniele del Friuli, whose small, artisan production of prosciutto has a reputation that often exceeds the better-known Parma ham. The family-run Prosciuttificio Prolongo (prolongo.it) offers fascinating tours in English at €2pp. From San Daniele, the road quickly rises into the foothills of the rugged Carnia mountains. Perfect for hiking and biking in summer and cross-country skiing in winter, the two villages of upper and lowerSauris – Sopra and Sotto – resemble a fairytale kingdom with strange mythical sculptures. And don’t miss the Alice in Wonderland hamlet of Pesariis, one of the world’s clockmaking capitals, with an enchanting museum and 14 monumental clocks displayed throughout the village.

A popular lunch hangout for local Udinesi is Enoteca Fred, whose speciality is a memorable steak tartare. In the evening, visitors should consider reserving atAquila Nera, where the speciality is generous sharing plates of local salami, prosciutto, lardoand mortadella. Albergo Morgenleit in Sauris looks kitsch, but its innovative cuisine is a revelation, worthy of a Michelin star for dishes such as wild herb tagliatelle with pear and honey. Deeper into the Carnia mountains, Sot La Napa  is another revelation. Signora Eliana Solari follows more traditional recipes, such as a delicate flan of dandelion flowers direct from the family’s organic vegetable farm.

Udine metamorphoses at night; its narrow sidestreets and piazzas a goldmine of bars. Osteria Pierimortadele specialises in crusty sandwiches bursting with mortadella, accompanied by a glass of friulano or the local craft beer, Gjulia, while Retro Gusto (Via Val Vason 5) heaves from the start of the evening aperitivo – hardly surprising when a glass of wine is €1 including tasty free tapas. San Daniele is not just about its famed prosciutto.Enoteca La Trappola has a 500-year-old vaulted cellar of hundreds of different wines, and though Sauris may seem like a sleepy mountain settlement, the Pizzeria Pame Stifl (Sauris di Sopra 3) stays open well after midnight and has a lethal selection of herb grappas.

Udine has several reasonably priced B&Bs, and while Casa Angela (doubles from €60, casaangela.it) may be 10 minutes’ walk from the centre, guests get to stay in a grand art nouveau villa. In town, Hotel Suite Inn is a small boutique property with arty designer rooms. Up in Carnia, visitors are spoilt for choice in the lovely village of Sauris.Riglarhaus is a traditional Alpine pensione, with a spa and an outstanding restaurant, but the unbeatable address is Albergo Diffuso Sauris, an abandoned hamlet whose ancient wooden houses have been transformed into 40 cosy guest apartments.