8 Popular Jamaican Dishes and Where to Find Them

If you visit Jamaica you can expect to see many of the same dishes served in restaurants, cafes and snack shops everywhere on the island, all of which utilize fresh ingredients and local staples like cassava, breadfruit, chicken, seafood, ackee, plantains, scotch bonnet peppers and allspice berries. So, today here are just a few of the country’s most famous dishes that are served at most Jamaican food venues. 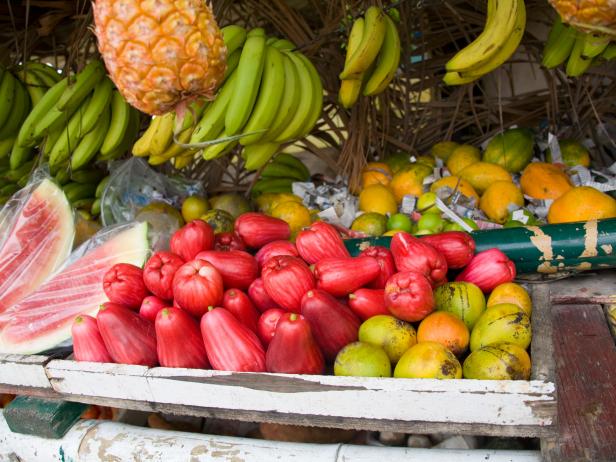 The name for this combination of fresh fruit, sweetened condensed milk and nutmeg is appropriate because it is a happy wedding of unique flavors. The dish blends together grapefruit and orange slices with cubes of star apple. The addition of sweetened condensed milk and nutmeg transform the ingredients into a rich fruit dessert. Some recipes add a few tablespoons of sherry or fruit liquor and almond slivers. If you visit Jamaica, check out the fruit dessert offerings at Push Cart Restaurant in Negril which offers a rum cream and fresh papaya dish called the Ice-Up Papaya and Hermosa Cove resort in Ocho Rios which serves a matrimony bread pudding. 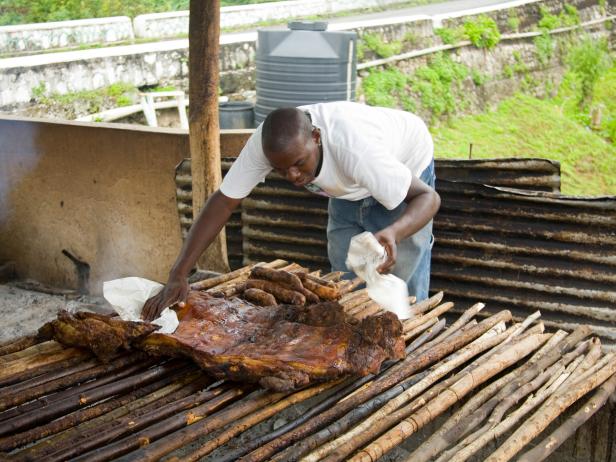 The island is world famous for its jerk cooking which originated with the Arawak Indians, a South American native tribe that settled in Jamaica over 2500 years ago. Their method of smoking and drying meats evolved into the now standard process of creating a marinade and a dry spice rub made from chopped scotch bonnet peppers, allspice and thyme. When fish, chicken, pork, beef and even vegetables are prepared in the jerk style, they yield a spicy-sweet flavor and succulent texture. The marination process can take anywhere from 12 to 24 hours after which the marinated ingredients are smoked on an open grill over pimento wood (specialty stores carry it). Scotchie’s, with locations in Montego Bay, Ocho Rios and Kingston, is the place to try jerk chicken. And Evita’s Italian Restaurant in Ocho Rios does an innovative jerk spaghetti with spicy jerk sausage. 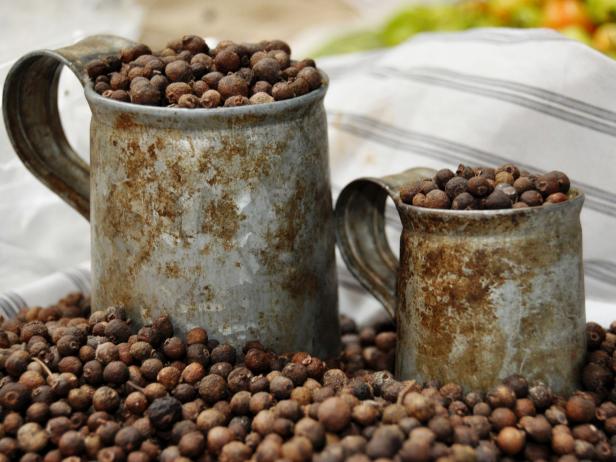 A bowl of Jamaican stew peas is a hearty meal in itself but the secret to a winning recipe must include red kidney beans (red peas). Adding coconut milk, stew beef, pigs tails, scallions and spices like garlic, thyme, scotch bonnet pepper and allspice (shown above) to the peas creates a flavorful stew that is usually served with white rice and fried plantains. It is not unusual to find several variations on this popular dish in both Jamaica and other Caribbean islands. In the U.S., Florida is host to many Jamaican restaurants such as Aunt I’s in Lauderhill which serves a classic stew peas dish. 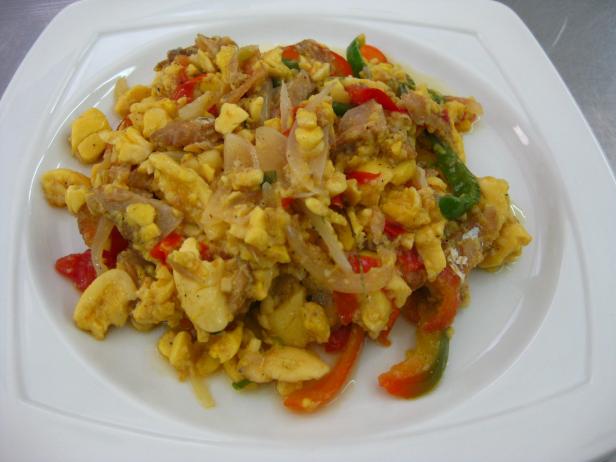 This tasty island mainstay dates back to the days of the sugar cane trade when the plantation owners exchanged rum and molasses for salted codfish from merchants in Newfoundland and Nova Scotia. The salted codfish was an inexpensive staple for the plantation workers and over the years evolved into a local recipe that combined the dried fish with fresh ackee. The result, which looks a little like scrambled eggs, combines the sweetness of ackee with the saltiness of the fish and is further enhanced by the addition of scallions, tomatoes, allspice and scotch bonnet peppers. Today the majority of the saltfish used in Jamaica is imported from Norway but the end result is no longer considered a poor man’s dish. Instead, it is considered one of the island’s unique delicacies. Try it at Murphy’s West End Restaurant in Negril.

What some people might call fricassee chicken is known as brown stew chicken on the island but the idea is basically the same. You brown chicken meat and then simmer it in a gravy made from pepper sauce, water, chopped red and green peppers, scallions, ginger and a few splashes of lime juice and soy sauce. The dish takes its name from the rich brown color of the stewed ingredients and it makes an ideal pairing with white rice and steamed vegetables. Miss T’s Kitchen in Ocho Rios serves a popular variation on the recipe—whole fish in brown stew. 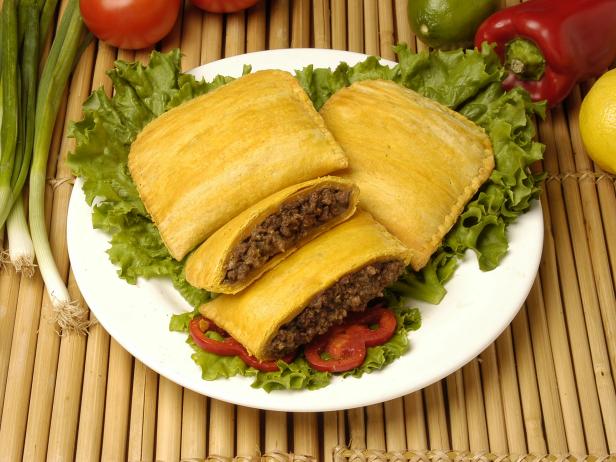 The days of British colonialism in Jamaica introduced some dishes to the island like the Cornish pastry which evolved into the natives’ own version which is like a savory turnover with different fillings and accented with cumin and curry spices. Beef patties are among the most popular but you’ll also see chicken, shrimp and other fillings used for this flaky crust delight at the popular Jamaican franchise known as Tastee Jamaica. 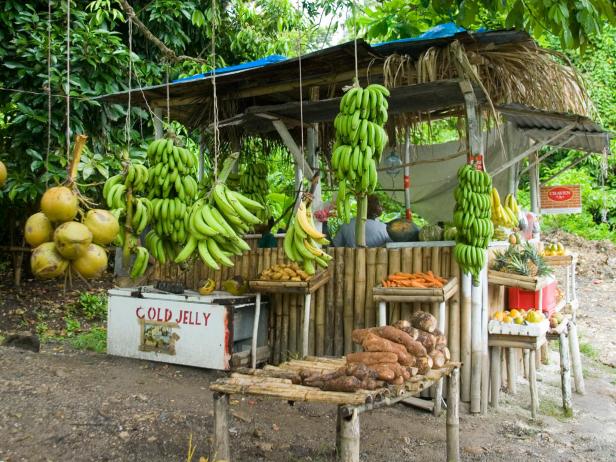 Cassava is a long tuberous root with a potato-like starch quality (pictured above on the homemade stand in the center) and is used in various Jamaican recipes but probably the most famous is bammy, a type of flatbread made from sweet grated cassava and coconut milk with a pinch of salt. Traditionally served at breakfast or with jerk or fried fish, it is the perfect compliment to most dishes. An ideal place to try it is Redbones in Kingston where they serve it with ackee and other specialities like plantain with drunken codfish. 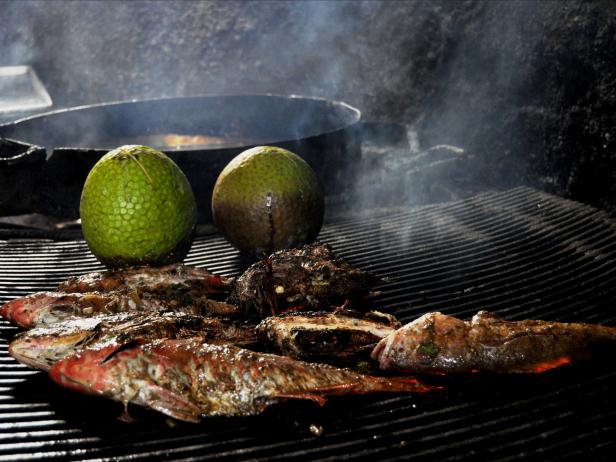