Believe it or not but insects are becoming quite the fashionable thing amongst the more hardy and adventurous foodies amongst them. Read on if you dare…

It might seem incredible – not to mention inedible – to anyone who has watched an episode of I’m a Celebrity, Get Me Out Of Here, where fame-seeking wannabees compete to eat the most repulsive, squirming insects and grubs. 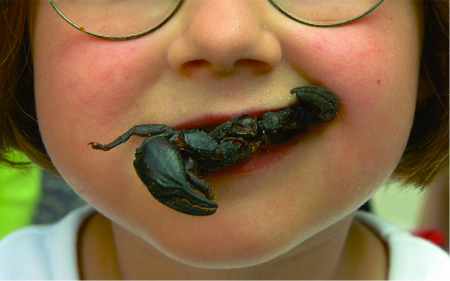 But insects as food are becoming the next big thing. While your average westerner will likely recoil at the prospect of chowing down on ants or beetles, eating insects actually makes perfect sense.

It is also being touted as the way forward for a world population that is set to soar to some 9 billion by 2050, placing huge pressure on our current food resources to feed so many people.

Insects are a highly nutritious and healthy food source, with high levels of fat, protein, vitamin, fibre and minerals.

Not only that, but insect harvesting and rearing is a low tech, low capital investment option, which has minimal impact on the environment, producing far fewer greenhouse gases, for example, than most livestock.

Quite the norm for some

Edible insects have always been a part of human diets, and it’s estimated that they form part of the traditional diet of at least 2 billion people, with more than 1,900 insect species being used for food. The most common being beetles, caterpillars, bees, wasps and ants.

Following these in the popularity stakes are grasshoppers, locus and crickets, according to a report by the Food and Agricutlure Organisation of the United Nations.

Crickets are already popular snacks in parts of South East Asia, But despite the popularity of Thai food, insects are one ingredient that have yet to take off in the West where squeamish gourmets find it the prospect of nibbling on fried ants a bit hard to swallow.

Which is a shame, because insects not only add a protein punch, they also provide a wonderful depth of flavour.

Various enterprising companies are now muscling in on this new food trend. Jimini’s, for one, has just launched a range of seasoned edible insect snacks in to the UK market, including crickets and locusts.

Owner Constance Deseine says the snacks, which are flavoured with spices such as garlic, herbs and dried tomatoes are high in protein, low in fat and sugar, and make the perfect aperitif. 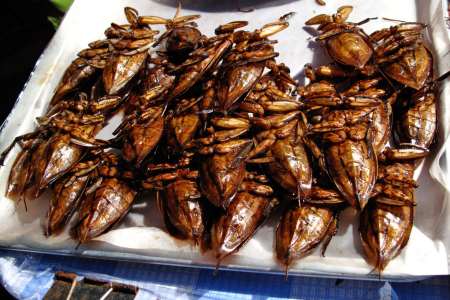 And now it’s time to pour out your almond milk and bin your cartons of soya, because cockroach milk is being touted as the next big superfood – thanks to a host of alleged health and beauty benefits.

Researchers in India have found that a Pacifc Beetle Cockroach, – which gives birth to live young rather than laying eggs – produces nutrient-rich milk crystals for her young, which may be beneficial to humans too.

The substance is thought to be one of the most nourishing on the planet, and boasts four times more protein than cow’s milk, making it a great post-workout supplement. It is also said to contain essential amino acids that promote cell growth, as well as lipids and sugars that fuel energy.

“The crystals are like a complete food – they have proteins, fats and sugars. If you look into the protein sequences, they have all the essential amino acids,” said Sanchari Banerjee, one of the researchers, in an interview with the Times of India.

The milk also has other benefits, like the fact it releases energy over time.

“It’s time-released food,” said Subramanian Ramaswamy, who led the project. “if you need food that is calorifically high, that is time released and food that is complete. This is it.”

While not commercially available, it is probably only a matter of time before cockroach milk, not to mention a whole host of insect snacks, will be hitting our more adventurous supermarket shelves.