Traveling The Best Castles in Germany

Today, these castles are some of the most popular German attractions, drawing visitors from across the globe to their treasure-filled armories and enchanting grounds. Neuschwanstein Castle, in Bavaria, has the distinction of being one of the most visited castles in the entire world, luring in more than 1.5 million tourists a year with its two-story throne room and ornately-furnished chambers.

Having survived centuries and World Wars, many of these castles remain important parts of German life. They now serve as government buildings, museums, landmarks, hotels, and—in more than a few cases—incredible private homes.

German castles represent a vast range of architectural designs, including the bucket list-worthy medieval Burg Eltz Castle and the Renaissance ruins of Hedelberg Castle. Turrets and towers rise from all across the German countryside, crowning Alpine mountains and overlooking vast parklands, forests, and charming villages. You can find them just outside popular cities, or floating on island lakes. What they all have in common, of course, is their vivid depiction of a moment in German history.

Capturing important moments in history from as far back as the 11th and 12th centuries, Deutschland’s palatial monuments are as striking to us today as they were to the royal families and military leaders who once inhabited them.What is a vacation to Germany without a peek at its famous castles? 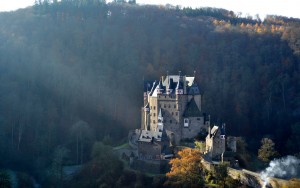 Few structures from the Middle Ages survive, but this gorgeous castle endured wars with little damage—in fact, it’s looked pretty much the same since the 15th century, when it accommodated three noble families. Today, it’s still under the ownership of one of the original households (the Eltz’s), who have had it for 33 generations. And we’re not the castle’s only admirers: back when Germany’s national currency was the Deutsche Mark, its spires featured prominently on every 500-mark bill printed between 1961 and 1995.​ 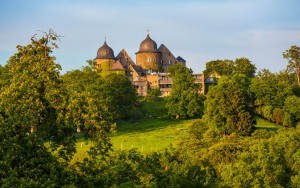 Nicknamed the Sleeping Beauty Castle, families love this ivy-covered, rose-filled estate for its fairytale looks (its actual address is on the Fairy Tale Route) as well as its offerings. In addition to housing a hotel, restaurant, and an open-air stage for theater performances, it also sits next to Tierpark, Europe’s oldest wildlife park with 80 different species including bison, wild horses, and penguins. 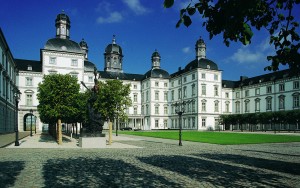 This former hunting chateau was originally commissioned as a “grander” version of Versailles. After alternating as a military hospital, boarding school, and refugee center, in 2000 it was ultimately remodeled as a grand hotel, and is currently a member of Leading Hotels of the World. Its 120 rooms and suites are tastefully done with leather upholstery and wooden desks. The hotel also boasts views of the Rhine Valley and a 3-star Michelin restaurant, Vendome. All this just 12 miles away from Cologne.