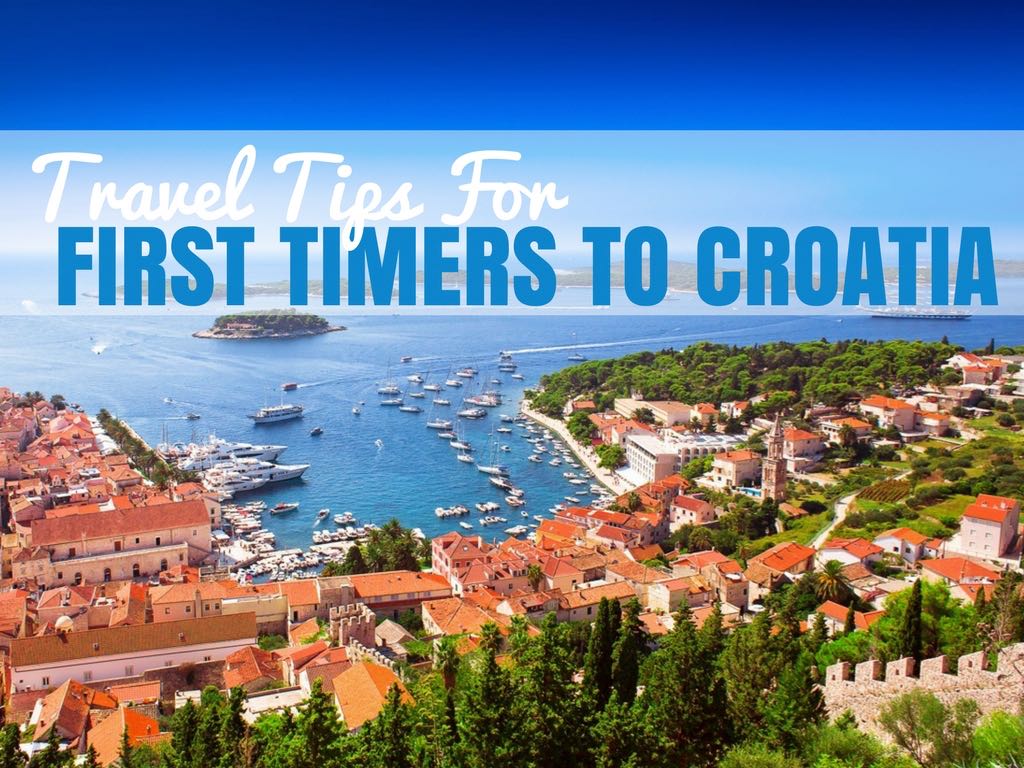 Written by Trevor, a Travel Writer at grabbinglifebytheballs.com

So you’re thinking of going to Croatia? Looking for a bit of sun and sea with a dose of history? Croatia is an amazing, beautiful, and surprisingly diverse country.

We visited Croatia for the first time in the autumn of 2016, so we want to pass on a few tips and tricks for other first time visitors to Croatia. We’re going to assume that “tips” like “visit Dubrovnik,” “see Plitvice Lakes National Park” or “check out the islands” are obvious and don’t need to be repeated.

If you’re planning a trip to Croatia, Dubrovnik is likely the first place you’ve heard about. Instead, here are some suggestions that will, hopefully, make your trip a bit smoother, take you a bit off the beaten path, and even save you a little money.

These tips will make your first time break in Croatia extra fun and extra exciting.

If possible, avoid the prime tourist season months of July and August. Temperatures are high, tourist crowds are insane, and hotel prices are at their peak. You’ll also pay more for ferries, national park entry fees, and other attractions. Do you need any more reasons to avoid the prime months of the year?

We visited Croatia for three weeks in September, starting in the north of the country and working our way south. The weather was still warm and comfortable, the sea temps were still good for swimming, it was easy to find excellent accommodation, and the worst of the tourist hordes were gone. Now don’t get us wrong, places like Dubrovnik and Split were still crowded…but just imagine how much worse it could have been!

Although one quick heads-up: If you’re travelling to the islands by ferry, the number of scheduled boats reduces dramatically outside of June through to September. Keep that in mind if travelling outside those peak times.

You can check ferry times make online bookings to secure your spot here.

Rather than making day trips from Split or Dubrovnik to the islands of Hvar, Vis, or Korcula etc., plan your itinerary to jump from one island to the next. Each has a distinctly different character, and there are ferries and shared water taxis that will take you from one to the next without having to backtrack to the main port. A bit of planning will save you time and money and is an excellent way to work your way from Split to Dubrovnik or vice versa.

Here are tips to plan your Croatia island hopping adventure.

We visited both Hvar (as a day trip) and Korcula (over several days) and vastly preferred Korcula. While Hvar is beautiful and definitely has its charm, it’s higher-end type of travel seems to attract more of the “monied” party crowd. Since we left our yacht at home, it wasn’t really our scene.

In contrast, Korcula is quiet, laid back, beautiful, and relaxing. It depends on what you’re looking for, but Korcula was our favourite. If you go, rent some bicycles to tour the island and explore some of the beautiful beaches and fun beach bars. If you’re into wine, you should also pop into some of the local wineries and try some of their Grk wine, found only in Korcula. 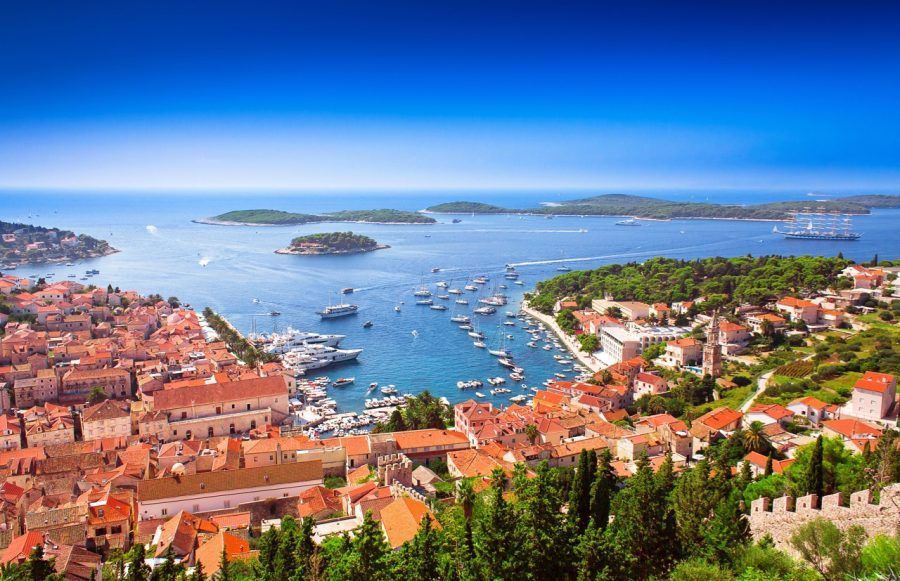 But you’re not going on a cruise; we hear you say! Maybe not, but you will want to be aware of them regardless. On high-traffic days, Dubrovnik can have 10,000 cruise ship passengers, resulting in shoulder-to-shoulder congestion in the Old Town when combined with all the other coach bus tour groups and independent travellers.

Split and Dubrovnik are famous for their Old Towns. Medieval towns tend to have narrow streets and cover a finite, typically small, area. Cruise passengers often explore these towns in large tour groups. Do you see what we’re getting at?

If you can visit either of these cities on a day where there are only 1 or 2 cruise ships in port, rather than 7 or 8 (or even when the ports are hosting smaller ships rather than the behemoths), the Old Town that you want to enjoy will be noticeably less crowded. This worked out well for us in Dubrovnik! On high-traffic cruise ship days, explore another part of the city or make a day trip to an island or another town.

Travel Tip #4: Venture Outside of The Main Cities

When we toured around southern Croatia, eventually the crowds got to us. You don’t have to go too far outside of the main tourist centres to find some peace and quiet, and still have the beautiful scenery you want.

Trogir, less than an hour drive from Split, is a fantastic town right on the water with a small but atmospheric old town and beautiful beaches. Trogir can be visited as a day trip from Split, or better yet, make it your base with Split being the day trip.

Near Dubrovnik, a great day trip option is Cavtat. Reachable by bus, or even better by water taxi, in about an hour, Cavtat is a small town that feels worlds away from busy and crowded Dubrovnik. There are walks you can do around the island and plenty of accommodations and waterside restaurants.

There is so much more to Croatia than Dubrovnik, Split, and the islands in between them. 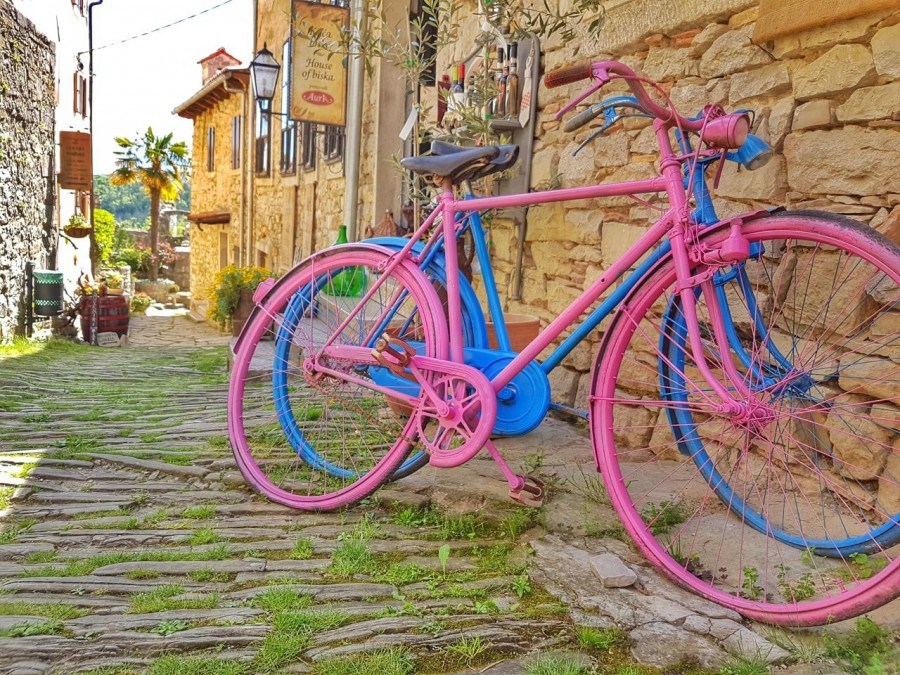 Istria, the northern part of Croatia bordering Slovenia, was one of our favourite parts of the country. We based ourselves in Rovinj and explored the coast and inland from there.

Istria should be on the itinerary of any foodie out there. The region is home to some of Croatia’s best wines as well as truffles and olive oil. Since the area was once ruled by the Italians, it has a distinctly Italian feel to it that you don’t experience in the rest of Croatia. Unfortunately, that often manifests itself in low-quality pizza and pasta in the tourist restaurants.

Do yourself a favour, and stick to ordering dishes with local ingredients. Renting a car to explore the small hilltop towns, such as Groznjan and Motovun, makes for a great road trip! 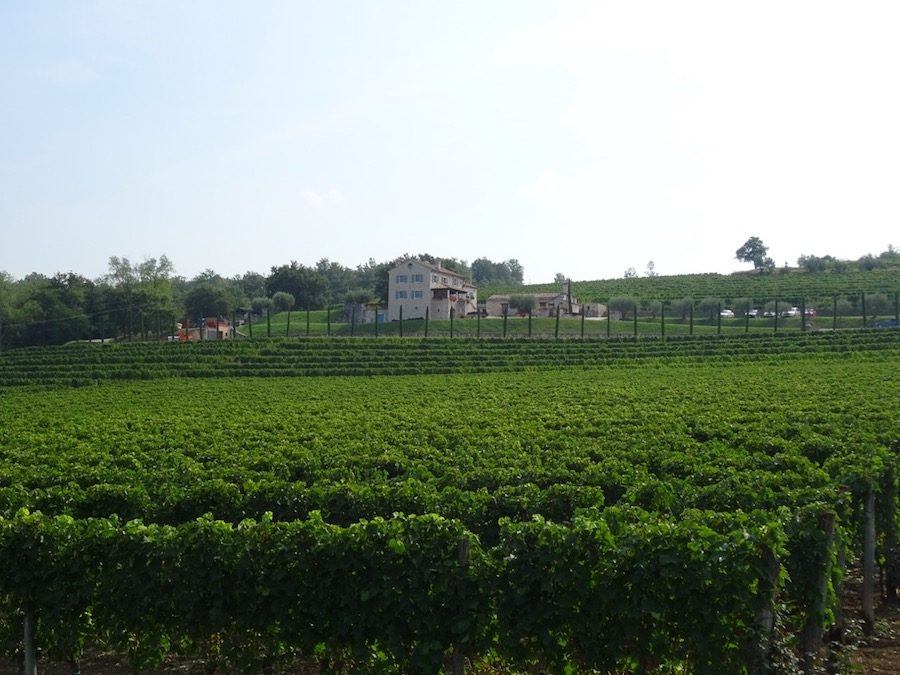 Rovinj itself is an interesting town to explore on foot. With some great weather, you can work on your farmer’s tan exploring the shops, restaurants, and churches during the morning. Then show off that tan on the beaches, walking distance south past the harbour and along the coast. Just be warned – the further you walk, the fewer clothes people wear.

The southern end of the beaches is not for the shy. Let it all hang out, as they say! 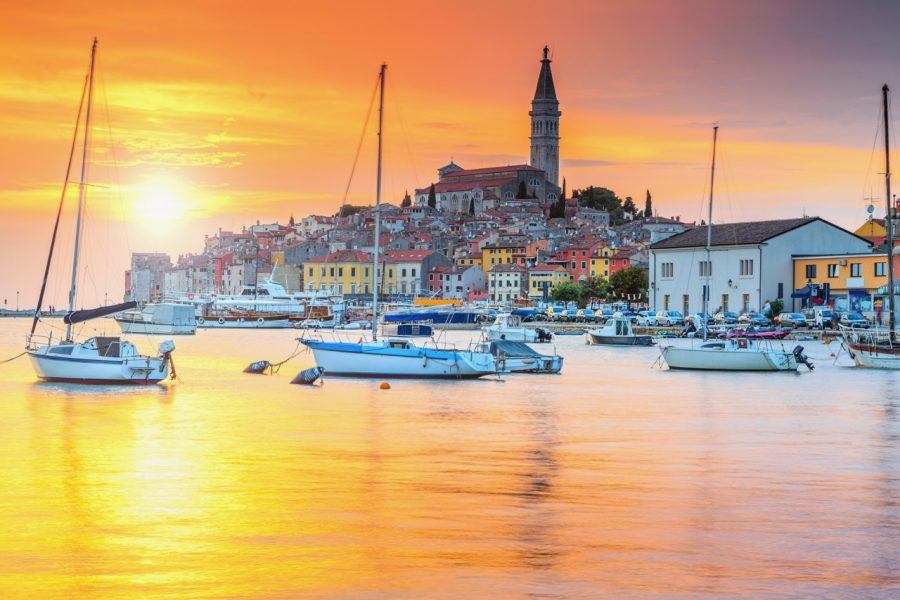 Travel Tip #6: Use Zadar as a Base To See Natural Beauty

Zadar is a fascinating city to explore in its own right, but it can also be used as a base to explore several of Croatia’s incredible national parks. This includes the famous waterfalls of the Plitvice and Krka National Parks, as well as hiking in the nearby mountains at the less touristy Paklenica National Park. 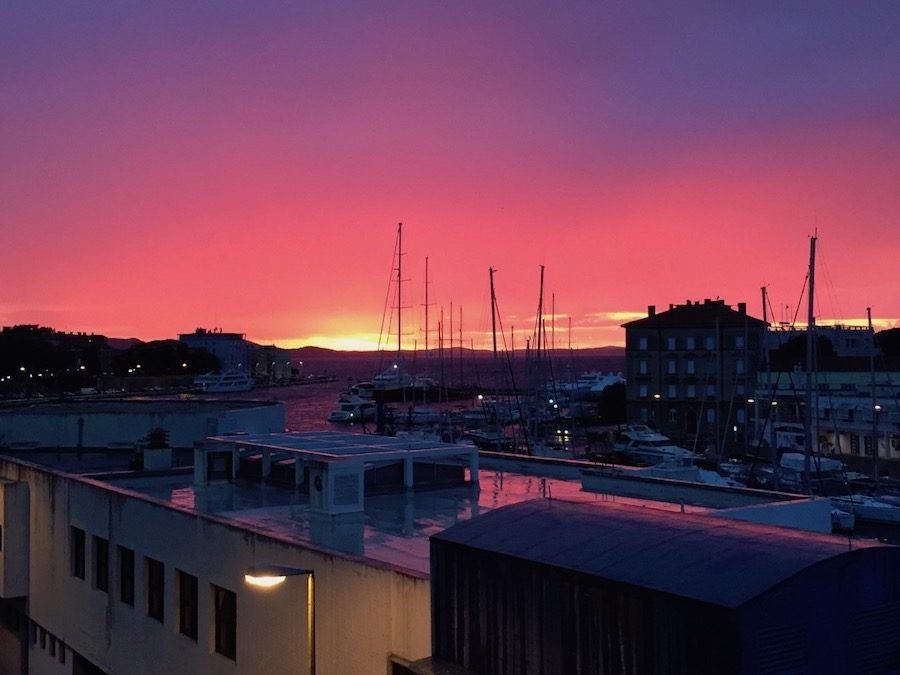 Rent a car to give yourself the most flexibility if you feel comfortable driving – or get a private transfer for a luxury touch. Our top off-the-beaten-path tip for what to visit when in Zadar is to check out Pag Island, which brings us to…

A handy bridge from the mainland to Pag island makes it an easy one-hour drive from Zadar. Pag has an entirely different landscape compared to much of the rest of Croatia; in some parts, it almost seems like you’re driving on the moon. The island is probably best known for its cheese. While they make many different types of cheese, the most famous is made from sheep’s milk. Salt from the surrounding ocean gets deposited on the vegetation of Pag Island, in particular, a hardy type of local sage, which is then eaten by the sheep. This provides a distinctive flavour to the Pag cheese.

Do a tasting and tour at Sirana Gligora (offered every hour, no need to book ahead) – this was definitely a highlight of our trip! 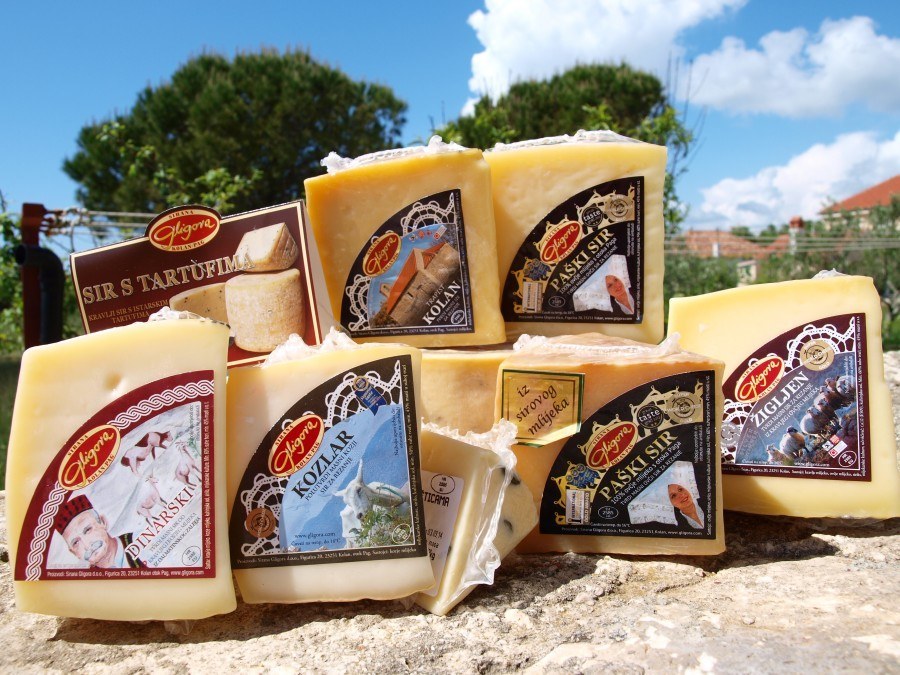 Pag Island also has some great beaches. During the summer months, Zrce beach is the “Ibiza of Croatia.” Get your rave on at Hideout Festival or laze about one of the huge beach clubs. If dancing with drunk 20-something strangers isn’t your thing, by September the beach is deserted, but the water is still warm and swimmable. We practically had the place to ourselves!

When you’re sitting in your hotel room (or rental apartment) balcony in Rovinj or Zadar, eating some incredible truffle cheese from Pag Island and washing it down with a nice bottle of Istrian wine, you can thank us later. 😉 You’re welcome! 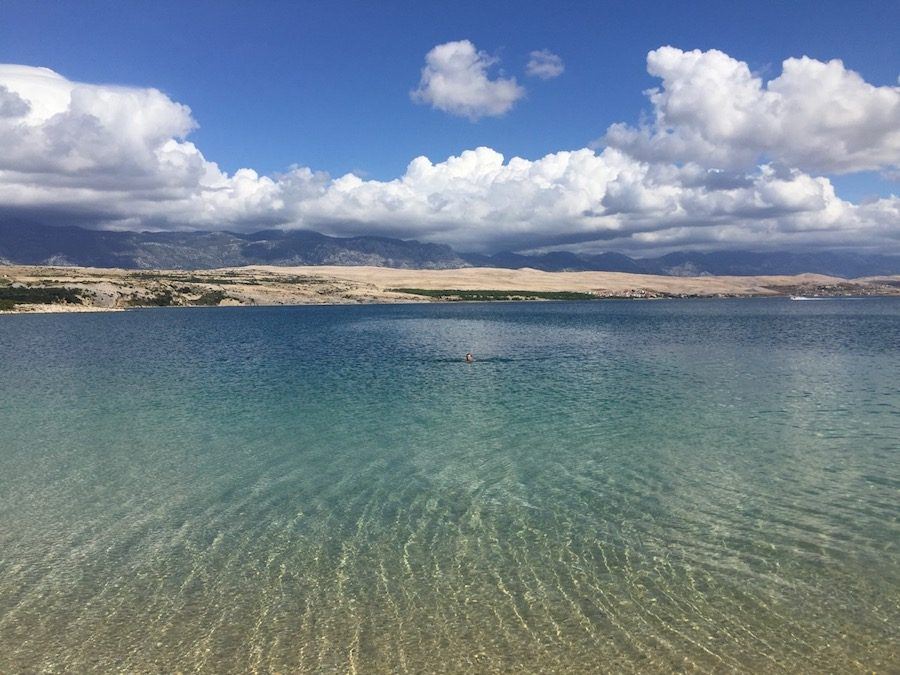 This goes for any country really, but keep it in mind for Croatia, a nation filled with sports enthusiasts. Few things offer a better immersion into the local culture than attending a local sporting event. In most of the world, this means checking out the local club schedule for a nearby football match. In other parts of the world, this could mean anything from cricket to sumo wrestling. 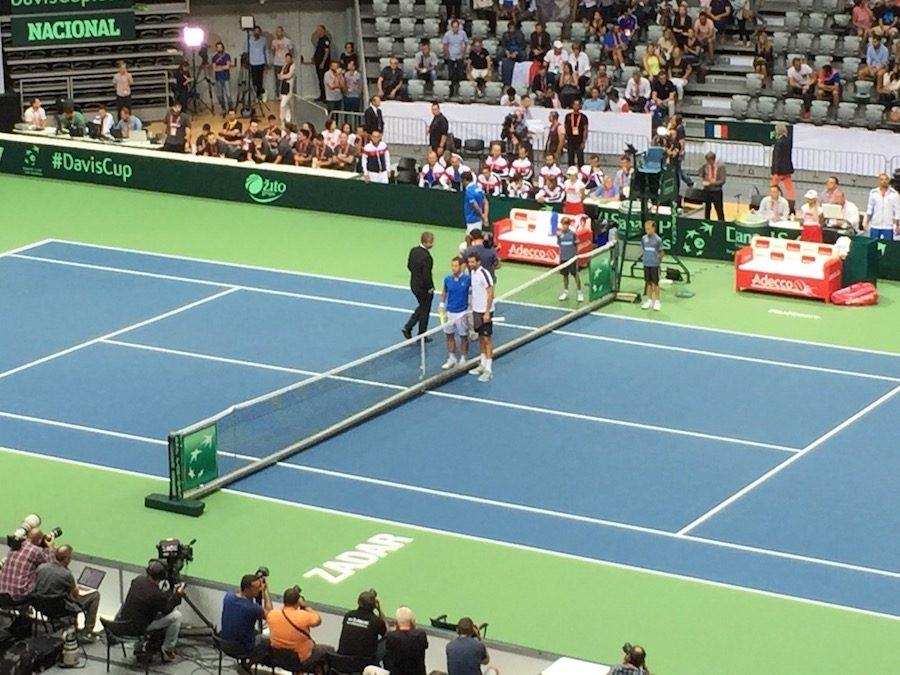 We are big tennis fans. When we were in Zadar, we saw a sign advertising the Davis Cup tennis tournament, where Croatia was playing in the semi-finals against France. It just happened to be occurring on the very weekend we were in town. We snapped up some pretty inexpensive tickets and had a great day. The matches were rowdy, with most of the crowd chanting and wearing Croatia’s national colours. It was a very memorable moment when Croatia won!

Travel Tip #9: Take a Daytrip (Or More) To Mostar

The city of Mostar in Bosnia and Herzegovina is an easy (although somewhat long) day trip from either Split or Dubrovnik. Plenty of travel companies offer tours. Public, long distance buses are also comfortable and easy to arrange yourself.

You can see all of the best ways to get to Mostar from Dubrovnik here.

Mostar is one of our favourite places in the Balkans. The culture is vastly different to Croatia, from the history to the religious diversity to the amazing food. If you can spare the time, spend a night here so you can fully see the sights and enjoy the food.

Thrill seekers can even sign up for a course to jump off the famous bridge. For wimps like us, keep your eye out for tour groups. There are plenty of “fake” divers on the bridge, who are only there to attract a crowd and then solicit tips. The actual dives seem to happen as soon as the next tour group shows up on the water’s edge. 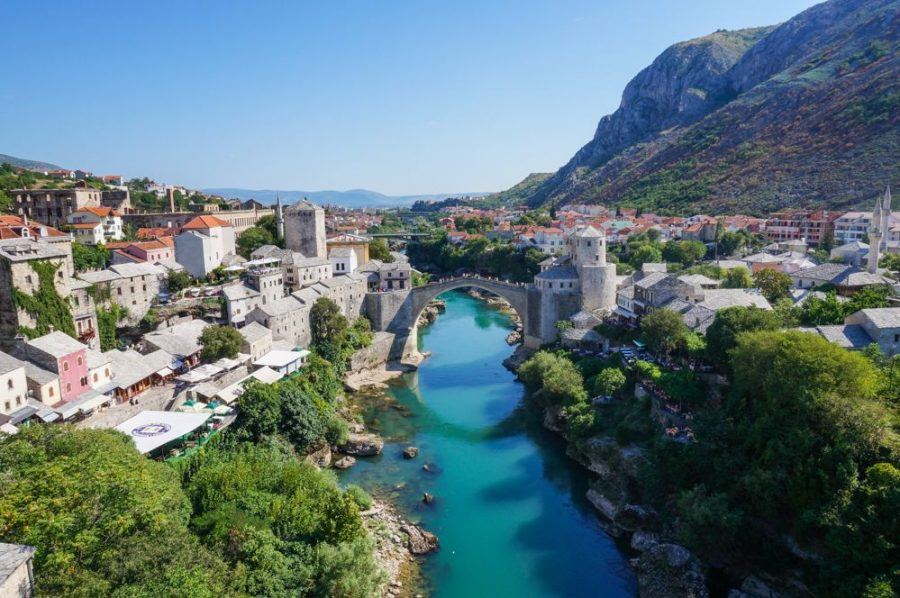 Travel Tip #10: Rental Apartments Can Be a Great Option

We found rental apartments were easy to find through major booking websites such as Airbnb and were often great value. Rather than staying in a typical hotel room or hostel, for a similar (and often lower) price, we could have a basic kitchen and living area as well.

Get up to €35 in travel credit from Airbnb here. 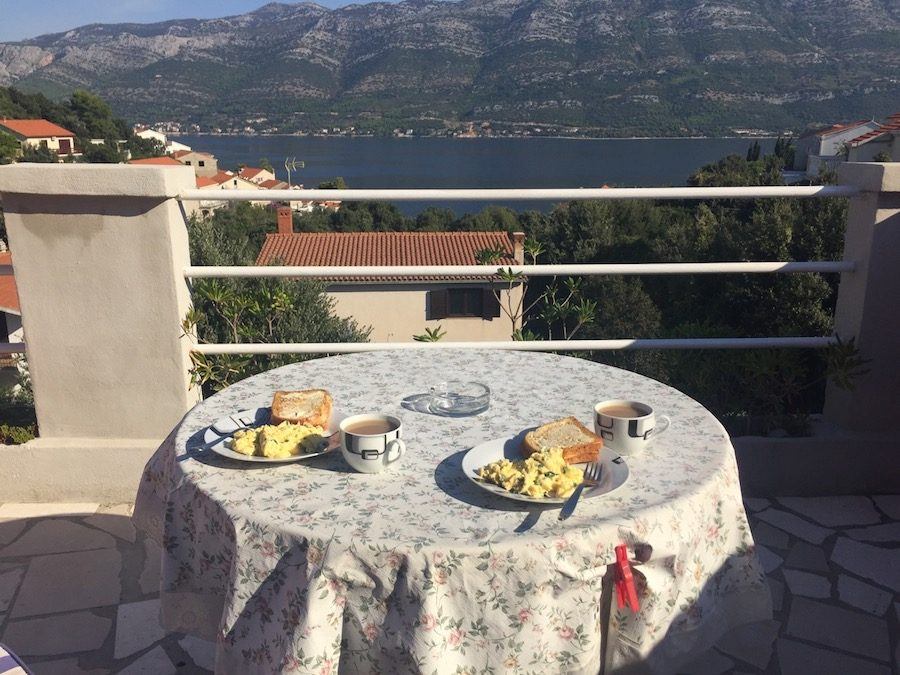 Tips For Your First Time to Croatia: View Over Korcula

If you’re travelling on a budget, rental apartments make it easy to self-cater. While Croatia is known for its fresh seafood, that is also often the most expensive item on the menu. Budget options were often pizza and pasta and were usually disappointing.

However, fresh food markets are in every town so picking up some ingredients is never a problem. Exploring local food markets can be a cultural experience in and of itself!

Once you have your ingredients, you can whip up Croatian food with these Croatian recipes (in English).

That’s it, our top 10 tips for first timers visiting Croatia. We loved our time there, and can’t wait to go back. Please check out our other posts on Croatia here.  For trip reports, tips, and suggestions on many of the 60+ countries we have visited, check out our full blog at grabbinglifebytheballs.com.