Top 8 The Best Places for Whale-watching

Well! Whale-watching season varies, it depends on the location! Experts say luck plays a role in spotting these magnificent creatures. To optimize your chances, go whale watching on a clear day, when the ocean is calm, in one of these prime locations. And today, we will show you the 8 best place and best time to visit the whale! 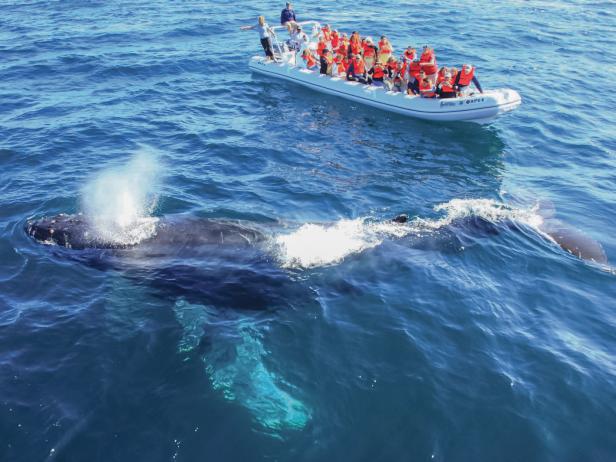 Humpback whale season in Los Cabos, on the southernmost tip of the Baja peninsula, runs from December 15 to April 15, but the whales may stay into May, says Beth Koopmann, Ocean Activity Manager for Cabo Adventures, a tour and activity operator. They migrate some 3500 miles south to Cabo, she says, where they mate and birth and nurse their calves.

“The babies can be extremely curious,” Koopmann says, “and generally will pop up right next to the boat for a look at us.” Tour operators are careful to give the mothers and their playful babies plenty of space. The adults may swim around the boat, she adds, and “gaze at us with their incredibly expressive eyes.” Sometimes blue and finback whales also appear. 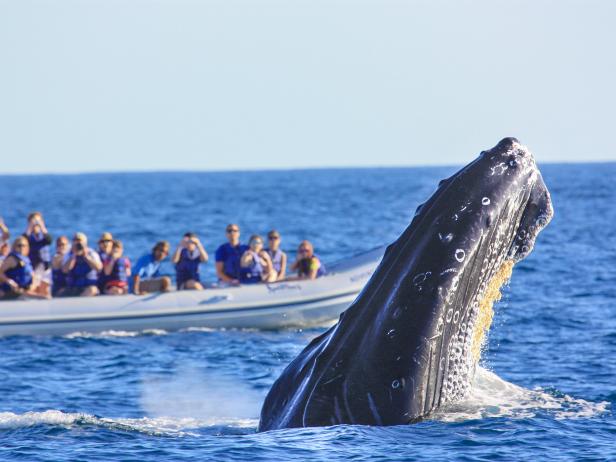 Koopmann’s tip for spotting whales: “Look to the horizon for the spout (blow),” which looks like steam coming out of the ocean, and watch for splashes and breeches. Cabo Adventures uses hydrophones to help their passengers hear the whales underwater. “The louder and clearer the sounds, the closer the whales are, and then we just wait for them to appear.” 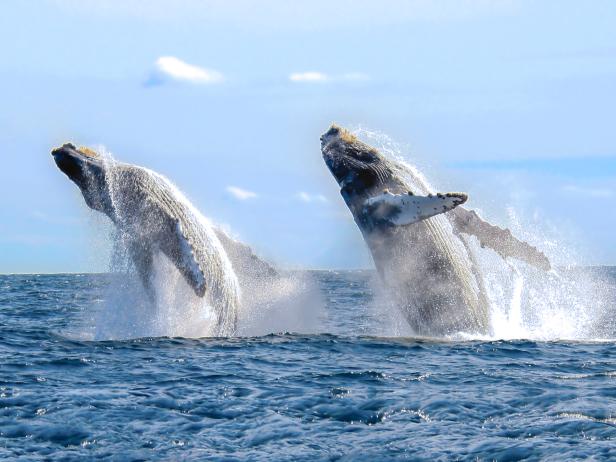 On Feb. 12, 2017, at 7 p.m., the environmental group Cabo Consciente will present “Singing with the Whales,” an evening of live music in Bahia de Cabo San Lucas. Concert-goers will hear whale songs through hydrophones connected to speakers. Admission is free, but donations will be accepted to benefit Raben, an organization that aids whales entangled in nets and fishing gear. 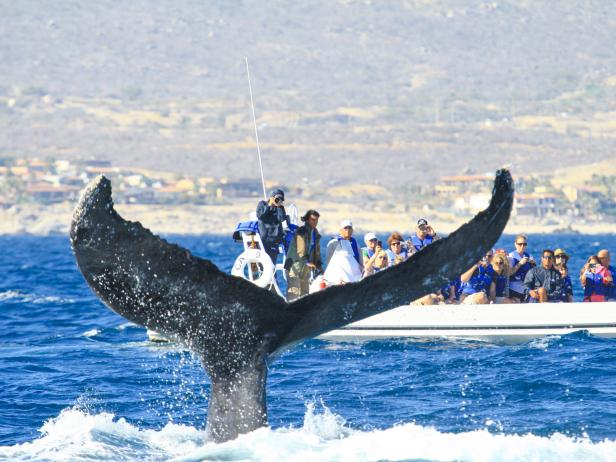 If you want photos or videos of whales, opt for a Cabo whale watching photo safari. Koopman recommends setting your camera in sports mode and anti-shake, if you have those options. Multi-shot mode also improves your chances of getting good shots.

Best time to visit: January and February, although the official season is December 15-April 15

Gray whale migration peaks in January, but in Monterey, “The Whale Watching Capital of the World,” you’ll often see whales year-round. Fifteen species, including blues, fins and minkes, are visible from boats or the shore. They’re especially easy to spot at Point Pinos and Monterey Bay and Asilmar, in Pacific Grove. The whales head north around mid-February and keep moving until April, when the mothers and calves return. 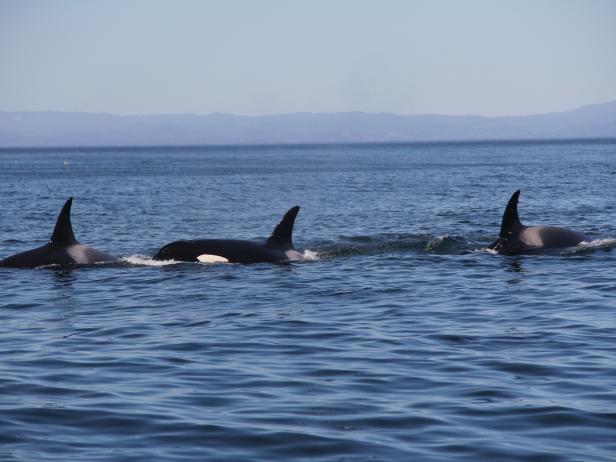 Whales feed in on plankton, fish and other marine creatures in Maine’s cool waters, sometimes arriving in mid-April. You may see pilot whales, finbacks, minkes, orcas and other species here, as well as right whales, whose numbers have been reduced by hunting. Bar Harbor Whale Watch Co. offers sunset tours from July 5-Sept. 3; when the light dims, plankton and herring rise in the water column, luring hungry whales into view. The company also offers daytime trips and combination whale/puffin tours (puffin season peaks from mid-June to August). 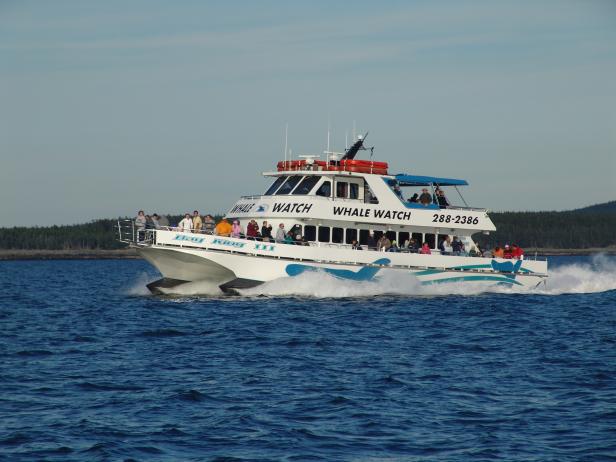 Best time to visit: May to October

This wilderness area, part of the Great Australian Bight Commonwealth Marine Reserve, runs along the coastline of South and Western Australia. Its sea cliffs, some of which reach 200 feet high, are great for land-based whale watching, and you may see humpbacks and blues. If you’re lucky, you may see southern right whales at the Head of the Bight, in south Australia. Ready for a really adventurous safari? Intrepid Traveloffers a 10-day Adelaide to Perth Overland trip and a 13-day Melbourne to Perth Overland trip. Both take travelers into the Bight to whale watch (in season, usually May to October). You’ll see many other sights along the way.

Best time to visit: June to September, at the Head of the Bight

These islands are arguably the best place in the world to see orcas, because the whales live here year-round. Three pods, nicknamed the “Southern Residents,” are usually seen from spring to fall, while other whales, such as humpbacks, grays and minkes, pass through. Take a boat tour for the best chance of spotting them, or visit stops on The Whale’s Tail, a group of whale-themed parks, museums and other places that run the length of the West Coast. Some stops even have spotting scopes.

Best time to visit: May to September

Each February, whales leave Mexico’s warm waters for Alaska. The best time to go whale-watching depends on what kind of whales you’re looking for. Gray whale migration beings around April 1, while you’re more likely to see orcas in Resurrection Bay, near Seward, from June to August. Look for belugas in Cook Inlet from spring into fall, or year-round between Kodiak Island and Katmai National Park. Blue whales frequent parts of the Gulf of Alaska, in July and August; they’re seldom seen near the shore. A Sitka Whalefest is scheduled for Nov. 3-5, 2017. Click here for more places to see whales.

Best time to visit: May to September 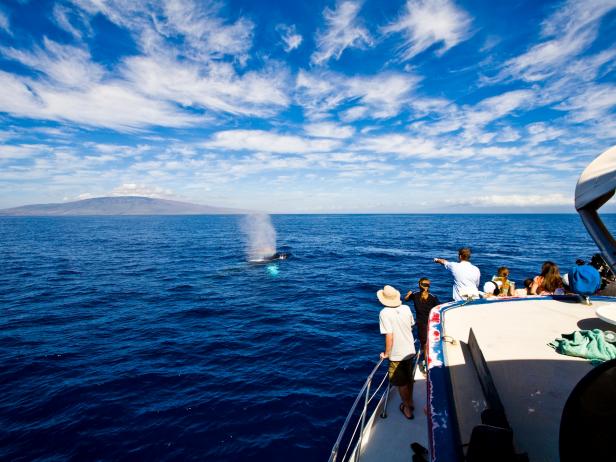 Scientists say the majority of all North Pacific humpbacks come to Hawaii, starting in December, to breed, calve and nurse their babies. You can see humpbacks from any of the Hawaiian Islands. If you’re on shore, use a pair of good binoculars to scan the ocean for spouts, which can jet as high as 20 feet. Learn more about whales at the Hawaiian Islands Humpback Whale National Marine Sanctuary on Maui.

Best time to visit: November to May; peak season is January to March 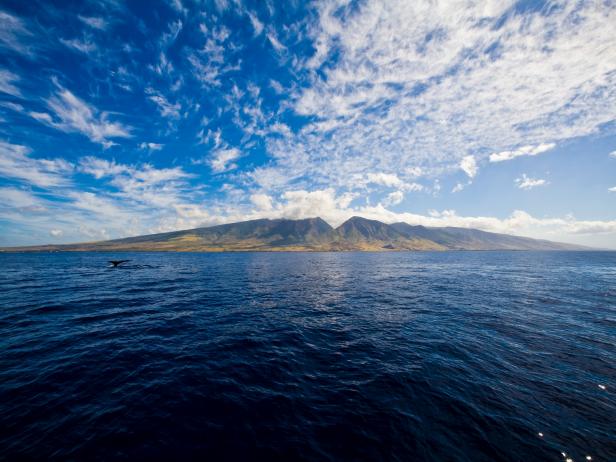 On Cape Cod, Hyannis Whale Watcher Cruises takes visitors on a jet-powered, state-of-the-art vessel to see whales at the world-renowned Stellwagen Bank National Marine Sanctuary. The company recommends watching for groups of seabirds that may be feeding on the water; they’re often a sign that whales are near. Cape Cod is considered one of the world’s 10 best whale watching locations, and you’re likely to encounter humpbacks, fins and minkes.

The Best Places to Travel in December