Tasty Rice Dishes from Around the World

Yep! We like rice – Short grain – Long grain – Wild or Jasmine. We steam it or cheat it with a pack of ‘ready prepared’. We eat it with sweet-and-sour chicken, pour curry all over it, even use it to replace buns (like a rice burger sold by McDonald’s in Asia). To many, rice availability means food security and often political stability, but this tiny grain is also a great alternative to gluten and other grains and beans. Also, today I will show you the world’s most interesting rice dishes.

The Chinese immigrants from the Hainan Province began moving to Southeast Asia in the early 1900s and bought with them a dish that is now popularly associated with Singapore and Malaysia. The method is to poach the chicken at sub-boiling temperature first, then use the chicken stock, along with garlic, ginger and pandan leaves, to cook the rice, giving it a wonderful flavour. The rice is often served with the poached chicken, freshly minced chilli and sweet dark soy sauce. While chicken rice is considered one of the national dishes in Singapore, Malaysian Chinese will insist that their version is better than Singapore’s.

This Italian rice dish requires a frustrating amount of patience and attention from the chef, but when it’s made right, risotto is one of the most delicious of Italian appetisers – creamy and buttery with notes of onion. There are several varieties: Milanese is made with beef stock, bone marrow, lard, cheese, and saffron while Piedmont’s “Barolo” variety is made with red wine and sausage. But overall, the basic process does not vary much: special high-starch short-grain white rice is cooked slowly with onion and butter (or olive oil), then wine is added before hot stock is gradually added in small amounts. Risotto has to be eaten immediately or else it will dry out – but that shouldn’t be a problem because it is so delicious.

A national dish in Jordan, Mansaf took its rice-based form in the 1920s when rice became popular and easily available. On a large platter, Jordanians lay a flatbread (markook or shrak), add white rice, top with spiced meat, and garnished with almonds and pine nuts. What makes mansaf really special is jameed: a yoghurt topping prepared by boiling sheep or goat’s milk, leaving it to dry and ferment, and adding salt to thicken it. In Jordan, mansaf is served on special occasions – weddings, holidays, or to honour a guest. If you have the opportunity to enjoy it, you know you have made a good friend in Jordan. 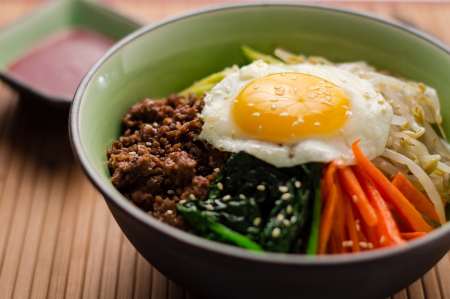 Served in a hot clay pot, Bibimbap is warm white rice topped with assorted sautéed vegetables, chilli pepper paste, and sometimes a raw or fried egg or some sliced meat are added for protein. The world bibimbap literally means “mixed rice”, so you mix all the ingredients and rice together and enjoy a fulfilling meal. Bibimbap was originally made as a convenient way to serve a lot of people at once using ingredients the cook already had, or like on New Year’s eve where Korean mothers had to get rid of all the leftover side dishes before the new year. Nowadays though, bibimbap is so popular that you can find it in big cities across Europe, and also on the menu on many airlines flying into South Korea.

One of the best-known African rice dishes, Jollof (sometimes called benachin, which means “one-pot” in Wolof) is a staple in most West African countries, including Senegal, Ghana, and Nigeria. Jollof is traditionally made of rice, tomatoes, tomato paste, onions, salt, chilli peppers, and a rich blend of spices. It can also be topped with vegetables, meat or fish to make a more filling meal. Jollof is so influential that Americans invented their own version called jambalaya. West Africans take their jollof very seriously. In fact, both Nigeria and Ghana claim to have invented the dish, resulting in heated debate that has even sparked contest shows where chefs from these two countries try to prove that their version is the tastiest. Keen to try this? Head to West Africa on 22 August, the World Jollof Rice Day, and you can decide which country cooks up the best Jollof Rice.

An identifying symbol of Valencia in Spain, paella is usually made with meat, seafood and vegetables with a touch of saffron, giving the dish its characteristic golden colour. Paella is so ingrained in Valencian life that there is a standardised recipe, which includes meat, beans and snails. The name paella translates to “pan” in Valencian, referring to the large shallow pan it is cooked in. It is a must try if you visit Valencia, or get yourself a “paella pan” and start making it at home.

The name of this traditional South Asian dish comes from the Farsi word “Birian”, which means “fried before cooking”, and it was probably popularised in India by Muslim migrants. Biryani generally has a combination of spices, rice and meat, can be simple or complex, and recipes vary across the subcontinent. Similar to Korea’s bibimbap, biryani was probably originally created because it was easy to make in large quantities with whatever meat was available. Today, there are many international variations on biryani from places like Myanmar and Indonesia, proving the universal appeal of rice and meat mixed together. 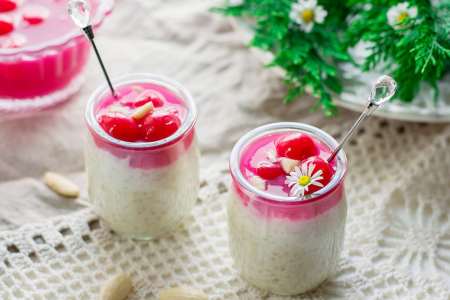 Rice doesn’t always have to be savoury. In Denmark, it is eaten as a dessert on special occasions. Risalamande was first made at the end of the 19th century, consists of rice pudding mixed with whipped cream, vanilla, and chopped almonds served cold with cherry sauce on top. Often, families put one whole almond inside the dessert, and whoever gets the almond wins a small prize. Rice can be plain, but it is far from boring. It is enjoyed by literally billions of people throughout the world daily and also on special occasions.