Patron Saint Festival: St. Euphemia is a town’s patron saint. The town celebrates its patron saint on 16th of September. Many religious and secular festivals take place in the town. Most of the activities take place at the Rovinj main square, and in and around the church. Activities include parades, concerts, wine making demonstration, tournaments, and fireworks at night time. On that day, people traditionally eat mutton with sour kraut. 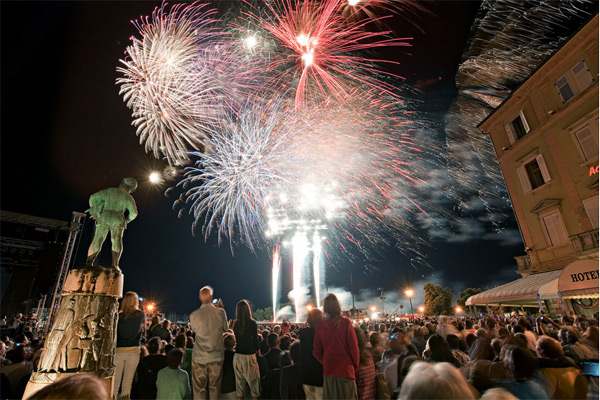 Unknown Festival is a brand new festival from the creators of Hideout, The Warehouse Project and Field Day. It took place for the first time in 2013, in the resort Amarin, just few kilometers from the old town. Festival is five days long. It is five days and nights of concerts, forest, and pool and boat parties.

Weekend Media Festival is the most popular media festival in the region. It takes place in the former tobacco factory every September for the six last years. Festival lasts four days. Festival’s program offers lots of lectures, panels and workshops regarding advertising and media in general, as well as evening and night parties. Parties are extremely popular. Every year, more than 4000 people attend Weekend Media Festival.

Dolce Vita Festival is a heritage festival celebrating vintage culture. It took place for the first time in June 2013. The festival brings you back to 1920s Mediterranean lifestyle through music, film, fashion, and food.

Avant-garde Jazz Festival is annual Jazz event taking place every summer (June – July). The first avant-garde jazz festival was held back in 2011. The concerts take place mostly at former Rovinj Tobacco Factory. After the concerts, there is excellent after party in the Tavern Kantinon.

Rovinj Photo Days is actually Photography Festival Finale. The event takes place all year around at different venues and featuring variety of activities, and its finale is held in Rovinj. The festival offers a friendly atmosphere, various indoors and outdoors exhibitions (many free entries), participation in award photo routes, and many reasons to come and mingle with photography lovers from the entire region.

St. Lawrence Night takes place in Rovinj at the beginning of August for the last seven years. On this day, all the town’s streetlights are turned off. Instead, torches and candles are lit. It creates romantic atmosphere throughout the old town. Light performances are played on the facades of the old town’s houses and buildings. There are also concerts on the town’s squares and streets.