The coast of South Carolina offers several appealing options for vacation getaways such as Charleston, Folly Beach, Hilton Head and Edisto Beach but one of the state’s best kept secrets is Daufuskie Island, which is only accessible by ferry. 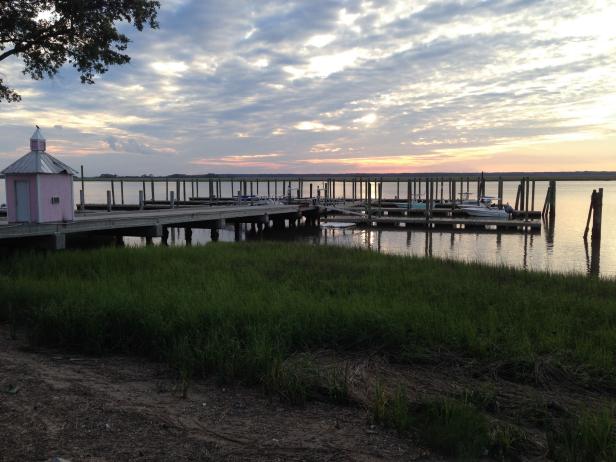 A sunset view of the Freeport Marina on Daufuskie Island, South Carolina which is also the site of the waterside restaurant, The Old Daufuskie Crab Company.

Situated between Hilton Head and Savannah and surrounded by the Intercoastal Waterway and the Atlantic, this rustic paradise is so small it isn’t even listed on some maps (It is approximately 5 miles long and 2.5 miles wide). It is also the ideal destination for those who want a laid-back island experience that combines a rich history and culture with scenic beauty, abundant wildlife and an array of activities from bicycling to horseback riding to kayaking. 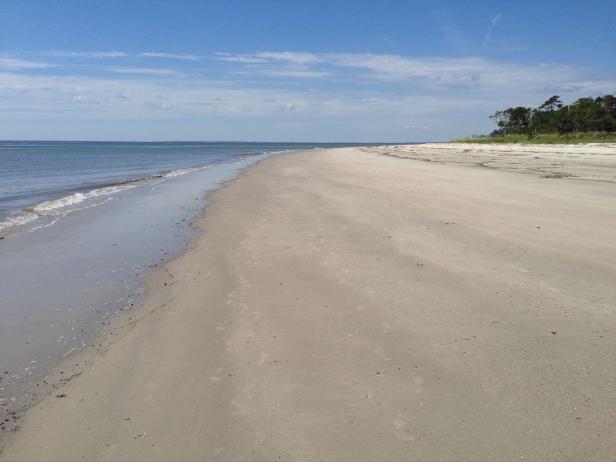 The Beach at Haig Point

This white sandy beach at Haig Point on Daufuskie Island, South Carolina is for member of the Haig Point community but the island also offers public white sand beaches as well.

The entire island is on the National Registry of Historic Places and one of its unique aspects is that very few people own a car or even need one. Golf carts are the main mode of transportation though you will also see occasional mopeds or bicyclists. It’s an ideal way to explore Daufuskie and get in tune with its relaxed, informal lifestyle. Even though it is directly across the water from Hilton Head, you are more likely to meet residents instead of tourists during your visit. Currently there are roughly 600 or so full time residents on the island, forming a close-knit, cross-cultural community of retirees, families, artisans and others who live and work on the island. 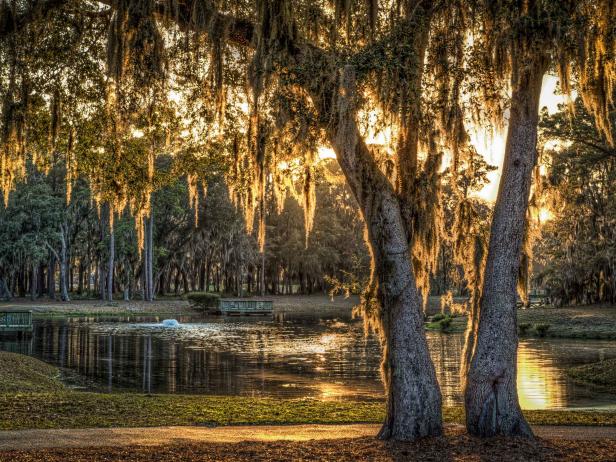 A pond at sunset on Daufuskie Island, South Carolina is surrounded by the familiar sight of live oaks with Spanish moss.

Huge, majestic water oaks covered in Spanish moss are in abundance here, some of them 500 years old or more. Palm trees, magnolias, loblolly pines, red buckeye, oleander and other flowering plants are part of the dense, lush landscape that is home to all kinds of wildlife. While riding a horse through the woods past ponds and marshes, I saw three alligators, two eagles, wood storks, snowy egrets, fox squirrels and lots of deer. You are also quite likely to see dolphins and right whales while taking the ferry to the island. One drawback are the insects so bring bug spray to keep the gnats and flies at bay. 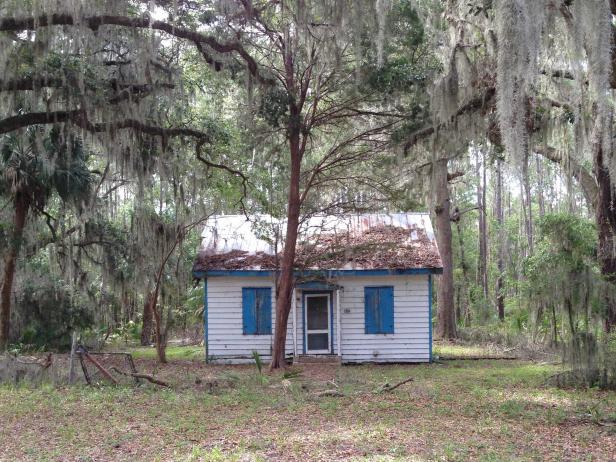 A Gullah House on Daufuskie Island

This is a typical example of a Gullah house that is painted Haint Blue on the windows in order to repel evil spirits.

As far back as 7,000 B.C., Daukuskie was inhabited by Native American tribes such as the Yemassee. A Spanish expedition first landed on the island in 1521 but it wasn’t until the early 1700s that the Yemassee were driven from the island by British-Scottish forces in the infamous “Bloody Point” massacre. After the Civil War, freed slaves of West African descent who had worked on the island’s cotton plantations formed the Gullah culture (a mixture of southern English and native African dialects and customs). The Gullah people prospered on the island as loggers and oyster harvesters until the late Fifties when pollution from the Savannah River decimated the local seafood industry. You can get a much more detailed timeline of the island at the Billie Burn Museum which features ancient artifacts, furniture and other historic memorabilia. Other highlights include the First Union African Baptist Church (circa 1884) and praise house, the Francis Jones Home (an example of a vintage Gullah dwelling) and the Mary Fields School, which was made famous by Pat Conroy in his novel, The Water is Wide, and later filmed by Martin Ritt in 1974 as Conrack starring Jon Voight. For information on history tours, contact Tour Daufuskie. 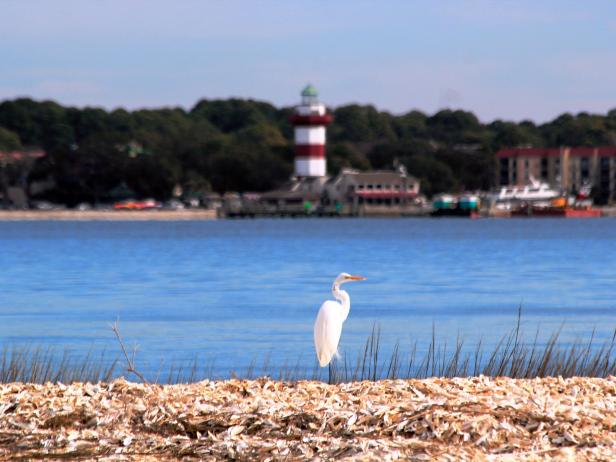 A Crane on the beach at Daufuskie Island

A typical scene from a day in the life of cranes living on Daufuskie Island, South Carolina

You could easily spend a week here and not get around to all of the recreational options that are available. Bird watching, bicycling, hiking and hanging out on one of the pristine sand beaches at Bloody Point or Melrose are no cost or inexpensive pastimes. If you like being on the water, you have a choice of kayaking (a great way to see local marine life and the shoreline from a different perspective), paddle boarding and fishing. Children will get a kick out of the volunteer-run community farm where they can experience goats, chickens, ducks, dairy cows and a seasonal garden. Golf, of course, is a big draw here and the Bloody Point Golf Club (open to the public) offers an 18-hole course. 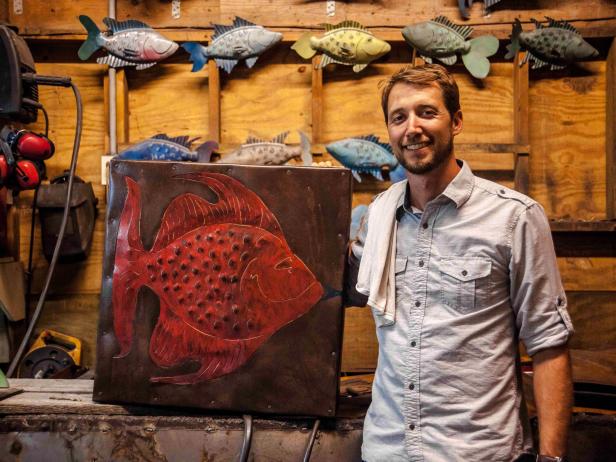 It is no surprise that such an idyllic sanctuary would attract artists and one of the most impressive is Chase Allen (pictured above), a sculptor who works primarily with metal and is famous for his mermaid and marine life creations at the Iron Fish Art Gallery. Beautifully designed ceramic dishwear, accessories and art objects by Emily and Lancy Burn can be viewed and purchased at Silver Dew Pottery. Equally stunning are the handmade scarves dyed with indigo by islanders Rhonda Davis and Leanne Coulter that are available through their company, Daufuskie Blues. If you are a fan of rum, I highly recommend a tour of the Daufuskie Island Rum Company, founded by Tony Chase, where you can sample some of his flavorful distillations such as vanilla spice (bottled with a whole vanilla bean) and his Gold Reserve, which is aged one year in Kentucky bourbon barrels. 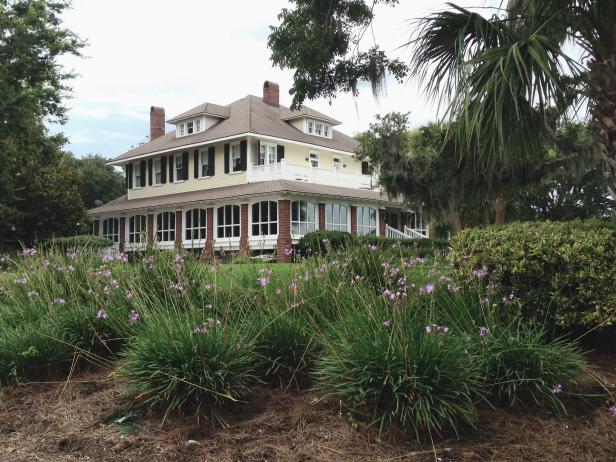 The Strachan Mansion was build on St. Simons Island in 1910 and later transported intact to Daufuskie Island in 1986 where it serves as guest accommodations for the Haig Point community.

There are no hotels or inns on Daufuskie Island. Nor are there any public campgrounds or facilities. But there are plenty of rental properties available depending on your preference for a house, cottage, condo or room accommodations. If you plan to stay for a few days, you should definitely book lodging that includes a kitchen and bring groceries over to the island with you. There are a few general stores on Daufuskie that carry some bare necessities (snacks, soft drinks, beer) but no supermarkets or drug stores. If you are interested in experiencing the members-only Haig Point community, you should consider their Discovery Experience package which includes lodging at either the historic Strachan Mansion (pictured above)  or the 1873 Lighthouse, both with commanding views of the water. For more information on island rentals, contact Daufuskie Island Accommodations. 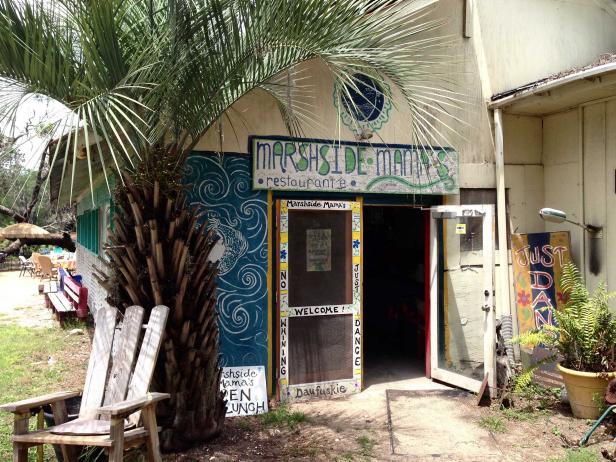 Located at the Beaufort County dock on Daufuskie Island, South Carolina, Marshside Mama’s is a local restaurant specializing in fresh seafood and other regional dishes.

Similar to the lodging situation, there are only a handful of eating establishments on the island but all of them are good, especially if you are a fan of fresh seafood. Marshside Mama’s at the Beaufort County Dock serves up fresh, family-sized meals with daily specials such as a barbecued in-bone pork chop and Low Country gumbo. I tried the grilled mahi salad which was delicious but enough to feed three people. The Old Daufuskie Crab Company at the Freeport Marina is a funky, relaxed bar and grill with great sunset views and a signature appetizer – deviled crab (pictured below). The shrimp tacos, hamburgers and quesadillas are also popular favorites. Serving both breakfast and lunch is Lucy Bell’s Cafe, a cozy little diner that offers both comfort food standards (chicken salad, key lime pie) and more ambitious entrees like lobster thermidor. Their grilled redfish po’ boy was one of the highlights of my trip. A more upscale dining option is The Eagle’s Nest Restaurant and Bar at Bloody Point which has a wide range of selections including filet mignon, crab cakes and grilled chicken Caesar salad. And if you opt to do the Haig Point Discovery Experience (mentioned above), you will have access to the Haig Point Clubhouse (great sandwiches and snacks by the pool) and the Calibogue Club offering gourmet dining on the water. 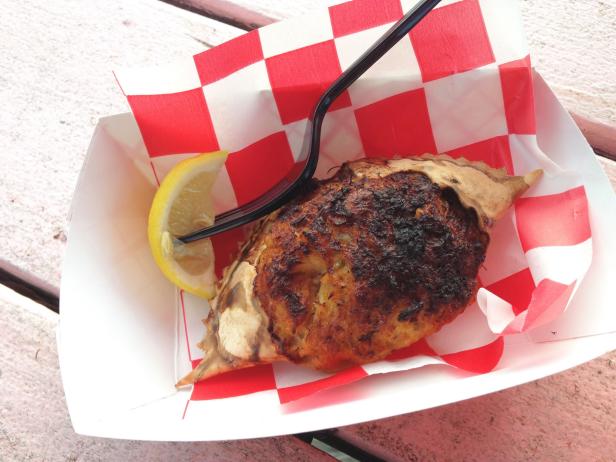 One of the signature appetizers at the Old Daufuskie Crab Company is deviled crab.