8 Coastal Villages And Towns In Montenegro You Gotta Check Out 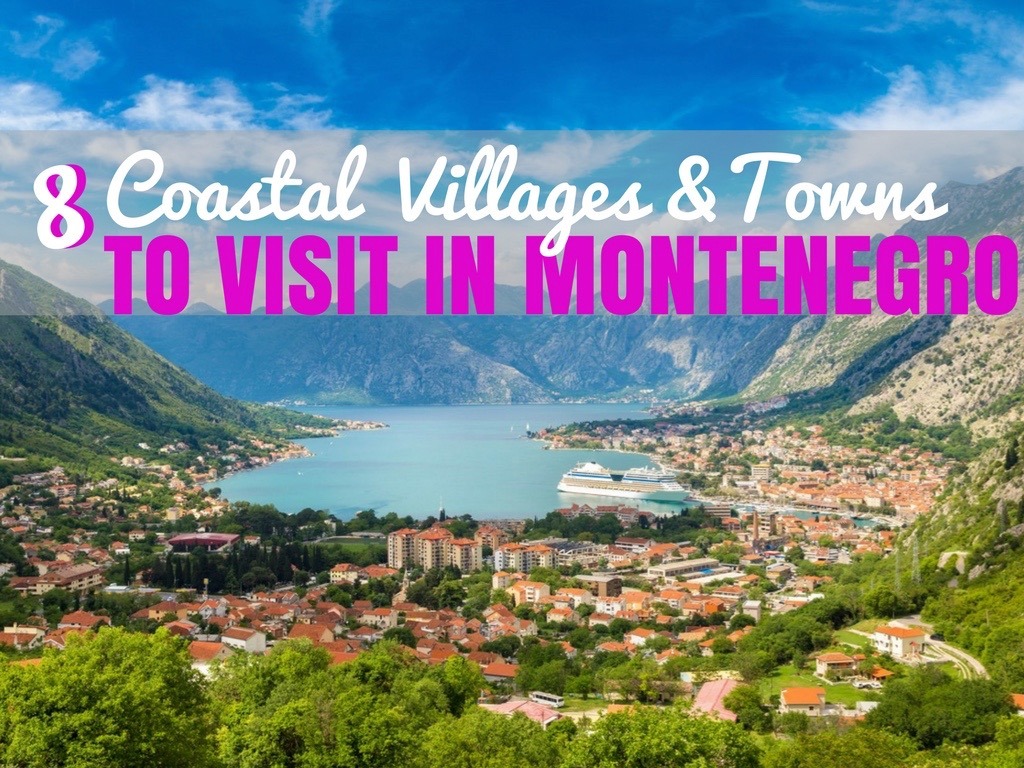 Starting in the historical Herceg-Novi and spanning over 120 km of Adriatic coastline before ending at the multi-religious Ulcinj, Montenegro is known as the land of “A Hundred Stari Grads” (old towns) where you can get lost while climbing its walls, hiking its mountains or enjoying the local gastronomy.

From the picturesque city of Perast, the ancient Stari Bar and the fairy-tale Kotor, the most eye-popping cities can be found alongside Montenegro’s long coast. 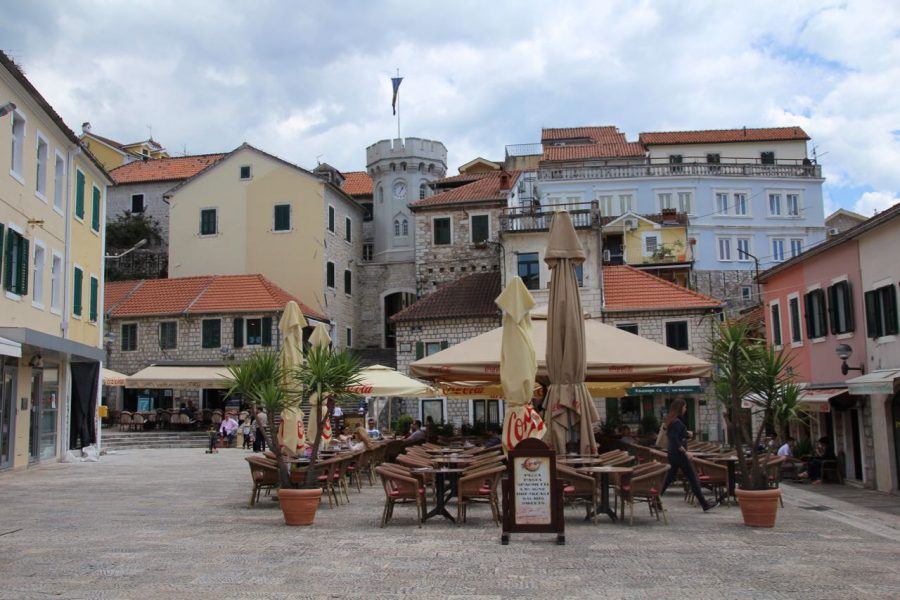 Herceg-Novi is located just about 50km from Dubrovnik (Croatia) and 40km from Kotor. It was once used as a fortress by the first Bosnian King Stjepan Tvrko I. Nowadays it welcomes the visitors traveling into Montenegro from the west.

Today, the city is a major tourist destination, and it is well known both as the ‘city of the sun’ and as a spa and health center, thanks to a large number of sunny days all year round and the abundance of healing sea mud and mineral water springs.

Between its most famous tourist attractions, it is important to highlight the Forte Mare castle built by the Bosnian king, the Austrian clock tower from the 19th century, the Kanli tower built by the Turks, and the Serbian church St. Michael the Archangel.

It all combines into a great mix of cultures that has been enriching Herceg-Novi since its foundation. 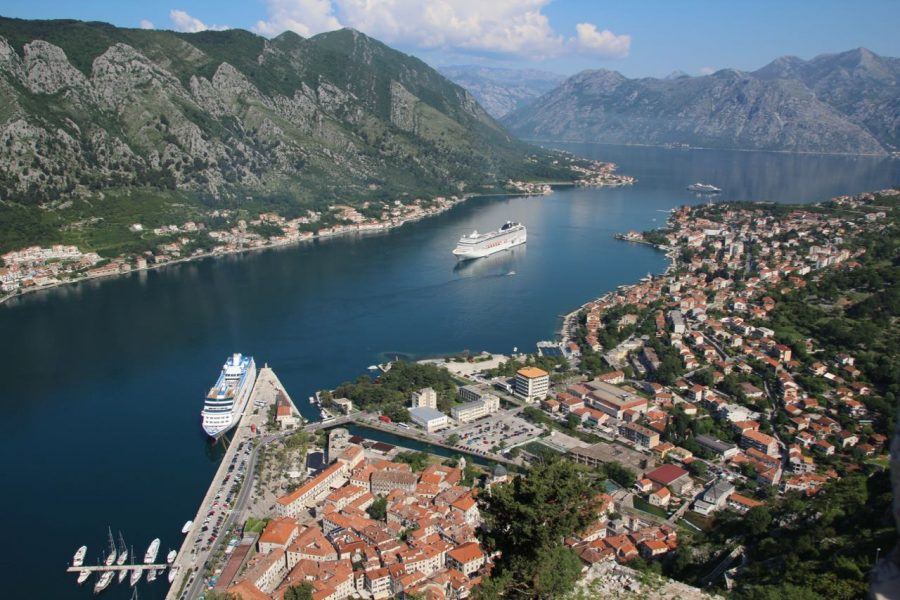 Kotor is situated in one of the most secluded parts of the Adriatic Sea.

It is known as the southern-most fjord in Europe and considered the only natural one of its kind in the world.

In addition to its must-visit-old-town, Kotor offers a wide range of activities for every visitor from hiking the 13km to Krsrac and enjoying the Montenegrin traditional gastronomy in its restaurant located on top to wandering through its small port.

One can also organize a day trip to the neighboring Perast or walk through its fortification at up to 15m wide.

Kotor, the main Boka Kotorska city and which its name originates, it occupies the first position on “the must-see destinations to visit in 2016 worldwide ranking” according to Lonely Planet. 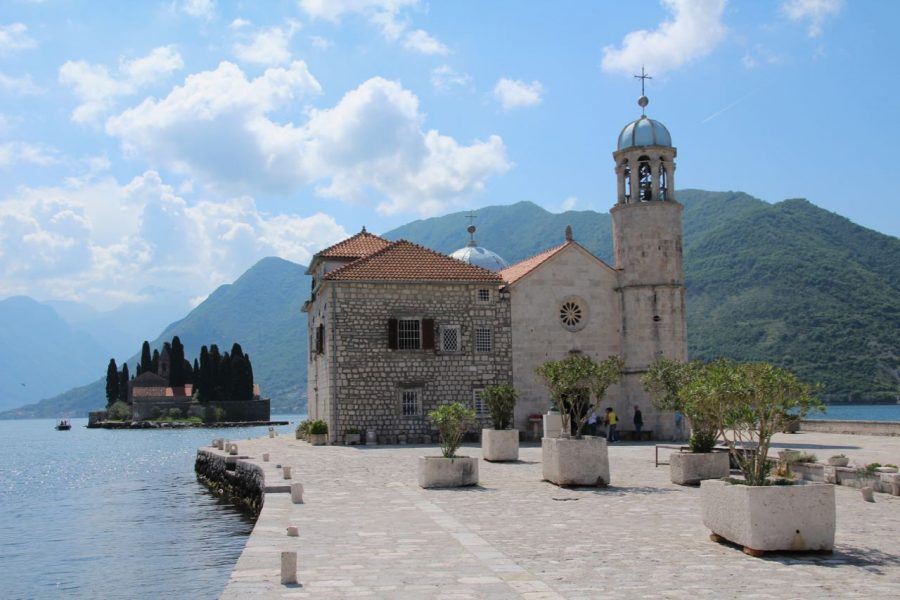 Perast was built between the Adriatic coast and the hills that house the city’s “palazzos” from the Venetian period. More than 16 Baroque palaces, 17 churches, numerous Orthodox structures and nine defensive towers remain from the past.

Nowadays, Perast holds the distinction as a protected UNESCO world heritage site, and it is considered one of the most luxury destinations in Montenegro.

Just a few kilometers from the city of Kotor, it is also the home of the enigmatic “Gospa od Skrpjela” (Our Lady of the Rocks Island), Perast’s most famous landmark, which can just be reached by boat for a €10 return trip. 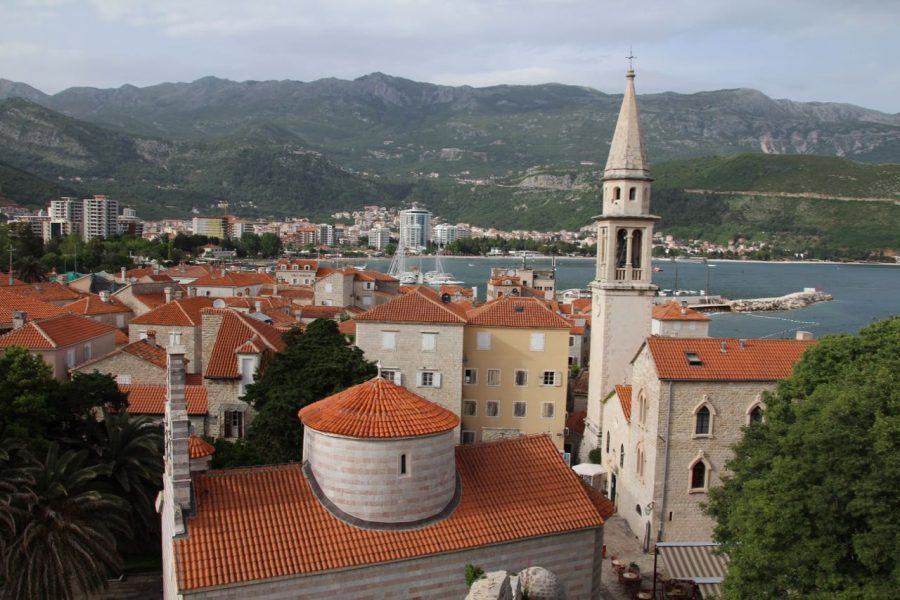 The city, also known as “The Central Europe Jewel on the Crown,” lies in the south of Montenegro, away from Boka Kotorska.

Founded by the Greeks in the 4th century BC and walled during the Middle Ages, the town is the center of the “Budva Riviera” relating to the cities name.

Budva is considered one of the liveliest cities in Montenegro due to its nightlife, water activities, clubs and summer resorts. However, its major highlight is the wall that encircles the old town. Its Stari Grad was originally an island but ended up joining the city of Budva after years of natural sedimentation.

Moreover, its white-sand, crystal-water beaches are considered one of the most beautiful in the world. 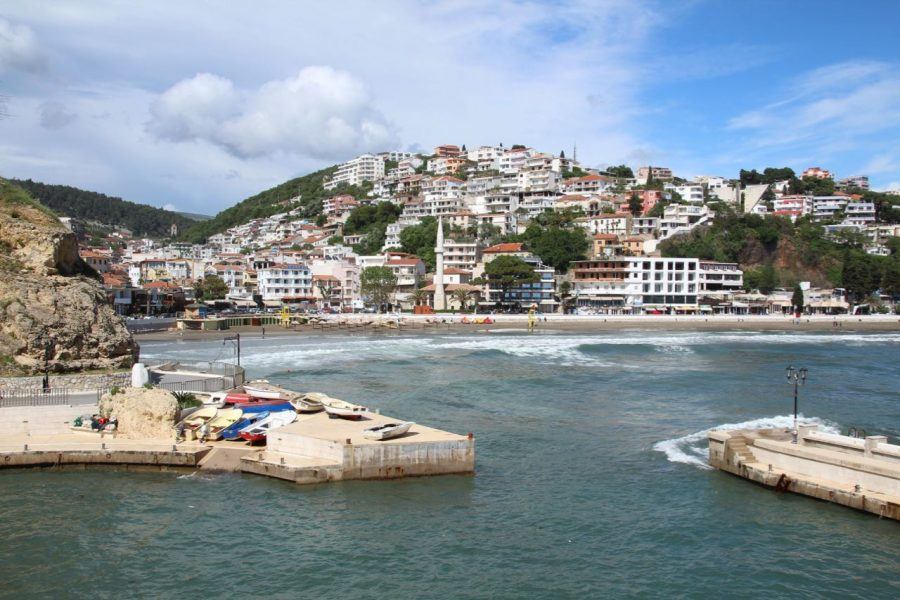 Ulcinj claims to be the most culturally mixed city in Montenegro, and it was recognized as one of the oldest settlements as well as the pirate capital of the Adriatic Coast.

Near the Albanian border, it’s hardly surprising that more than 70% of its inhabitants are ethnically Albanian. The city also homes the biggest Muslim population percentage in the country.

Ulcinj has been a historical mix of cultures and religions. It was once captured by the Romans and later became part of the Byzantine Empire.

It fell under the control of the South Slavicre during the Middle Ages before becoming part of the Republic of Venice in 1405 and of the Ottoman Empire afterward.

Nowadays, all churches and mosques, Montenegrins and Albanians live together in this hilled city of 12,000 inhabitants. 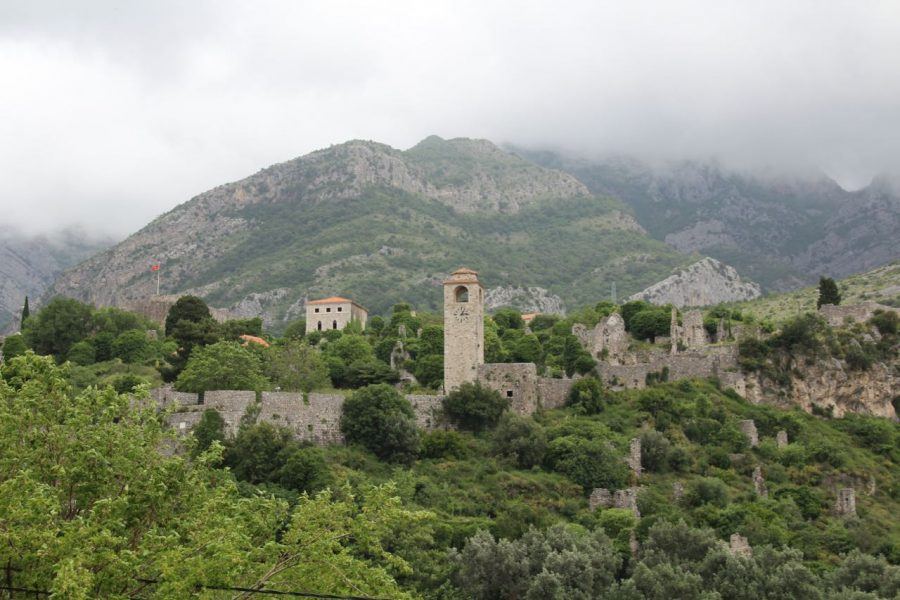 Located about an hour’s walk up at Rumija Mountain, is the unique old town of Bar. Although the old village has never been restored after an earthquake in 1979, they are trying to bring it back to its glory days.

Stari Bar is described as the largest medieval archaeological remains in the Balkans, and today, it is an open-air museum surrounded by trendy souvenir shops and awarded restaurants where you can relax after a long walk exploring its old history.

Defined as the “70’s Adriatic playground for the rich on a hilly peninsula and barely connected to the mainland” by Condé Nast Publications, Sveti Stefan, once a fishing village, changed its purpose in 1950.

A short drive southeast of Budva, the village houses one of the most iconic and photographed old towns in Montenegro. Unfortunately, the whole “Stari Grad” today belongs to a private hotel chain, the Aman Sveti Stefan, and the entrance is forbidden, that is unless you are a hotel guest. 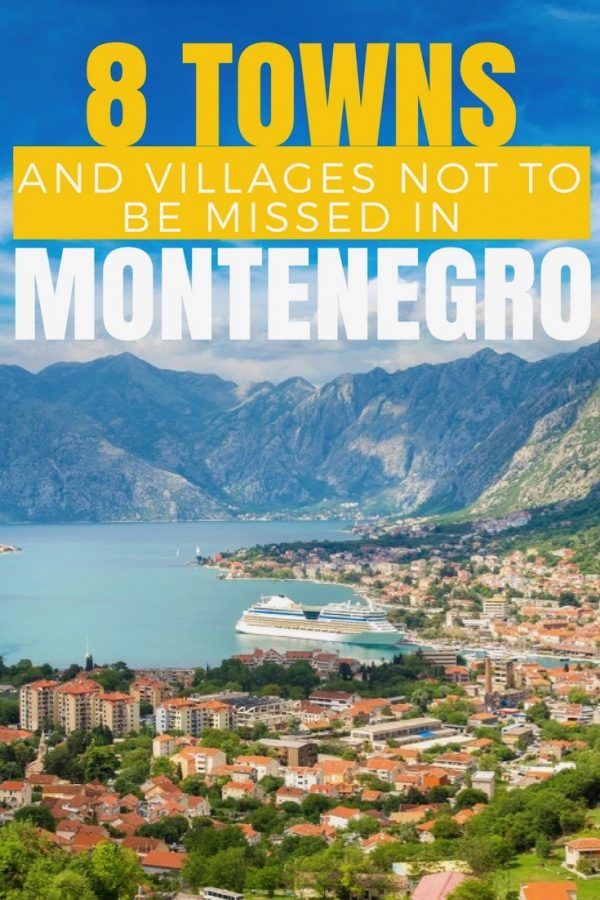 Tivat is located in the central part of Kotor Bay and south of Mount Vrmac, where you can enjoy the best view of the bay.

Tivat is recognized as one of the top nautical centers in the Adriatic, mostly thanks to the new Porto Montenegro – a modern Marina built to accommodate the most luxurious yachts and the country’s most exclusive naval clubs.

Leaving luxury aside, one thing that cannot be missed is the day trip to Gornja Lastva rural village, 3km away from Tivat. Set on the sunny slope of Vrmac hill, with a magical panorama of Tivat Bay and surrounded by olive groves, it dates from the XIV century.

Once a farmer’s village but now a tourist attraction, its houses are built of stone and hidden in wild Mediterranean vegetation.

The community welcomes its increasing number of visitors with the background sound of the olive mills.

Okay, so tell us – which towns in Montenegro will you explore first?