5 Delicious Destinations in Asia and Australia

Last year, I embarked on what would prove the trip of a lifetime: six months hopscotching around Asia. In truth, I had scant idea of what I was in for when my husband and I first packed our lives into twin backpacking packs and trundled ourselves off to the airport. But I knew there would be delicious things — strange, wonderful and delicious things — around every corner.

And I was right: the flavors, ingredients and preparations I encountered during those months forever altered the way I think about food, and if we’re being honest, about life. Here are the dishes that changed my worldview. 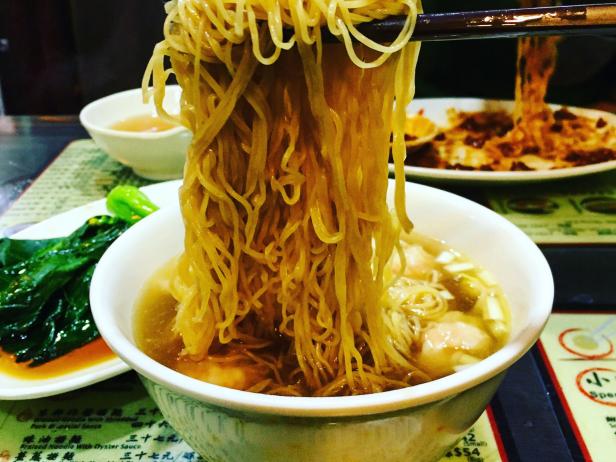 It’s my last day in Hong Kong, so I’m cramming in some final tastes of this flavor-soaked city. First order of business: Stuffing my face at Good Hope Noodle in Mong Kok. The rich noodle soup with shrimp wontons is dirt cheap at just HKD33, which translates to just over four bucks. You can’t ask for a better price!

A frenzied scene of gritty open-air markets, impossibly steep streets and zig-zagging mopeds, Hong Kong is home to a wonderful contrast of authentic Chinese fare and modernist cuisines. I was floored by the divine Szechuan fried chicken bao at Little Bao, a hip pint-sized eatery run by cool girl May Chow. Anointed with a sweet-and-sour Chinese black vinegar glaze and zingy house-made coleslaw, it wouldn’t seem out of place in a Brooklyn hotspot.

Later, I oohed and ahhed over top-notch traditional dim sum at Maxim’s Palace, a cavernous eatery bedecked in crystal chandeliers. The siu mai, veggie dumplings and shrimp-stuffed eggplant are just a few goodies of note. Of course, a visit to Hong Kong isn’t complete without a meal at Lung King Heen, the first Cantonese restaurant ever to snag three Michelin stars. I couldn’t get over the adorable rose-shaped dumplings filled with sweet lotus paste! 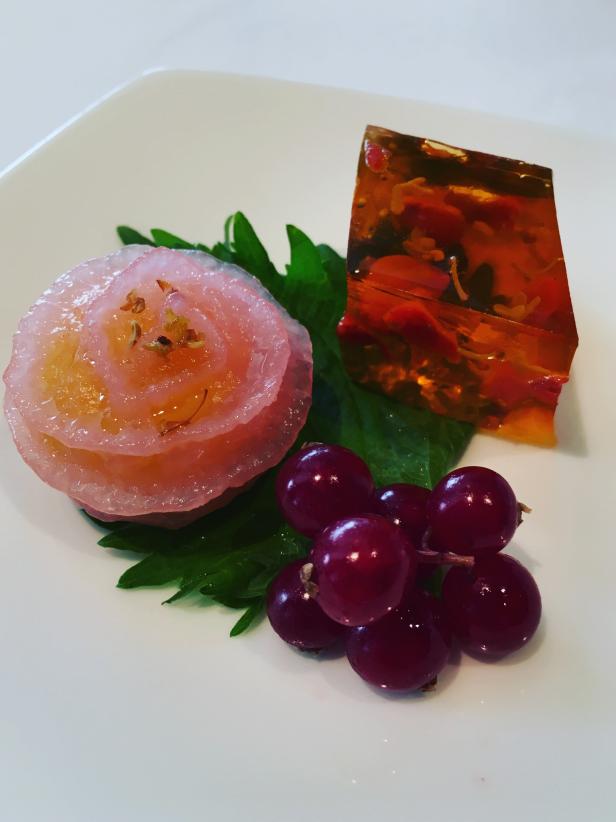 I still have room for lunch at Lung King Heen, the first Cantonese restaurant ever to snag three Michelin stars. I can’t get over this adorable rose-shaped dumpling! It’s filled with sweet lotus paste, and tastes even better than it looks.

Of all the reasons to visit Taipei, Taiwan’s capital city, food is tops in my book. My first stop is a local pastry shop — they’re on every corner — and I’m immediately overwhelmed by the tremendous selection. I go a little bit overboard, because why not: a poppy seed and almond swirled pastry, matcha-flavored bread stuffed with mochi and whole red beans, another red bean-stuffed number and a honeyed roll stuffed with delicate custard.

Later, I hit up a shop slinging chewy cold noodles dressed in creamy peanut sauce, raw garlic and a dollop of fiery chili paste. Even on a hot day, my fellow diners slurp down piping hot fish ball soup alongside their chilled noodles, so I naturally follow suit.

The next day, I explore the wonderful local market street just below my Airbnb in Songshan District. I nab silky pork-filled wontons in a rich broth, fluffy chive-stuffed bao and a sesame-studded flatbread flecked with fried garlic. But the best meal of the entire trip is a deeply flavorful and complex beef noodle soup. The meat, braised for hours, falls apart the moment it hits my tongue. 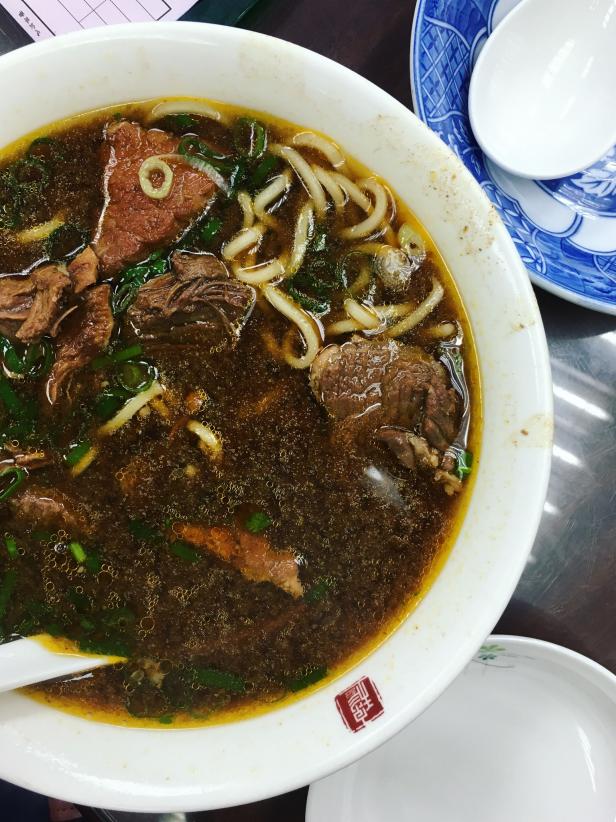 After a day strolling through the city, I end up at a small beef noodle soup restaurant. Beef noodle soup is one of Taiwan’s most famous dishes, and after my first spoonful, I know why. Despite its simple name, the broth is insanely complex and intensely wonderful. The meat, braised for hours, falls apart the moment it hits my tongue. I think I could eat this forever.

Shanghai is still a relatively young city — its history as a major hub dates only to the 19th century — but you’d never guess it from the complexity and variety of flavors on parade. I spend a day wandering through the former French Concession, an area of official French settlement between 1849 and 1943, which today boasts gorgeous architecture and cute boutiques. Hunger strikes, so I stop at a traditional noodle shop to scarf down "dry" Shanghainese noodles — meaning no soup — topped with tangy stir-fried pork, bok choy and dried mushrooms. It’s insanely good.

Hours later, I’m hungry again: I settle on a supper of chilled hand-pulled noodles swathed in fiery chili oil. They’re so good, slippery and chewy at once, that I order another spicy plate before heading back to my Airbnb. The next day, I have xiaolongbao — or soup dumplings — on the brain, so I make a beeline for Jia Jia Tang Bao, a cramped spot widely considered to serve some of the best in town. After waiting in line for what seems like ages, I find myself staring into a steaming bamboo basket cradling delicate pouches of fatty broth, pork and crab. After a quick splash of sweet soy-and-ginger sauce, I devour them like a woman who hasn’t eaten in a month. 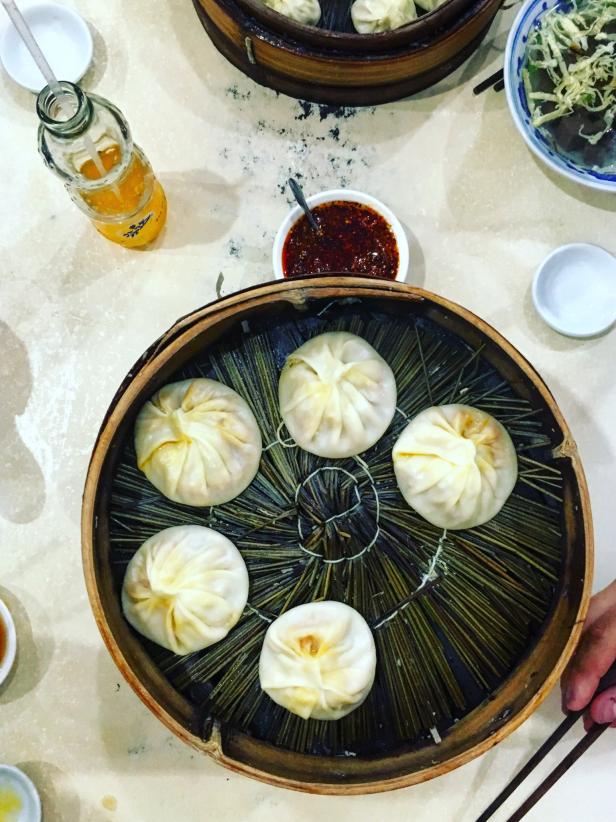 Some thirty minutes later, I’m seated on a low plastic chair before a steaming bamboo basket, which cradles delicate pouches of fatty broth, pork, and crab. After a quick splash of sweet soy-and-ginger sauce, I devour them like a woman who hasn’t eaten in a month.

After two blistering hot months in Asia, chilly Australia is a welcome breath of fresh air. I spend the day wandering amidst the food and knick-knack stalls at Queen Victoria Market, which has been around in some form since the mid-19th century. I grab a bite at The Mussel Pot, which operates out of an adorable trailer kitchen behind the market. The juicy green-lipped mussels are fresh from nearby Portarlington, which sits just across Port Phillip Bay; they have a gorgeous, bright orange hue and are bursting with briny juice and lemon. But the best meal of this trip’s leg is the tasting menu at Cumulus Inc. in the Central Business District. I’m bowled over by the Wagyu beef rump, doused in buttery Cafe de Paris sauce and garnished with colorful slivers of watermelon radish. It’s (almost) too beautiful to eat. 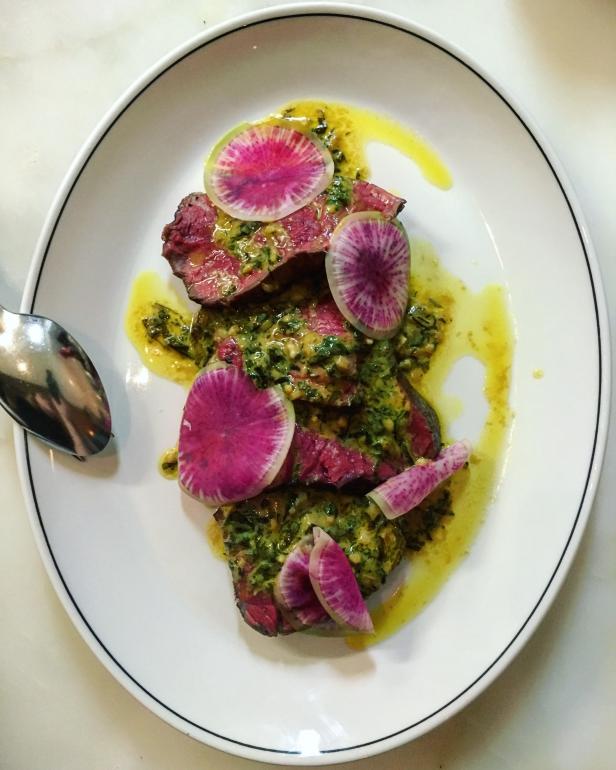 Tonight is my big splurge meal, at Cumulus Inc. in the Central Business District. I opt for the tasting menu, because why not? Among the most beautiful dishes to appear is the Wagyu beef rump doused in buttery Café de Paris sauce and garnished with colorful slivers of watermelon radish. It’s almost too beautiful to eat. Almost.

Hokkaido, Japan’s northernmost island, is famous for its shockingly fresh seafood, and I practically don’t eat anything else during the week I’m here. Upon arrival in Hakodate, one of Hokkaido’s main cities, I swing by Uni Murakami, a petite eatery specializing in briny delicacies. I can’t say no to a glistening bowlful of briny ikura, or salmon roe, nestled atop a bed of sushi rice.

My next stop is the small city of Otaru, where I’m staying at a luxurious Japanese inn called Ginrinsou Ryokan, the 19th-century former home of a herring fishing baron. A night’s stay at a ryokan customarily includes dinner, and tonight’s meal is nothing short of decadent. My favorite of the courses is a heady plate of creamy uni, or sea urchin, slivers of the freshest sashimi and delicate woven baskets brimming with raw sweet shrimp.

The next morning, breakfast doesn’t disappoint: at Ginrinsou, it’s a doozy, with almost more dishes than I can count, all meticulously styled and presented. It’s perfection. One of our last stops is Sapporo, the northern city that’s famously home to Japan’s oldest homegrown brewery.

After a tour of the old Sapporo brewery, I visit the on-site beer garden, which in addition to the brewery’s signature lagers, specializes in a dish called Jingisukan, or "Ghengis Khan." Slivers of raw mutton are grilled on a heavy metal skillet, which is heated table side. (The dish is supposedly inspired by the eating habits of invadng Mongolian soldiers, who grilled meat on their domed metal helmets.) I down bites between sips of crisp Sapporo lager, and thank my lucky stars I find myself in this very spot, in this very moment. 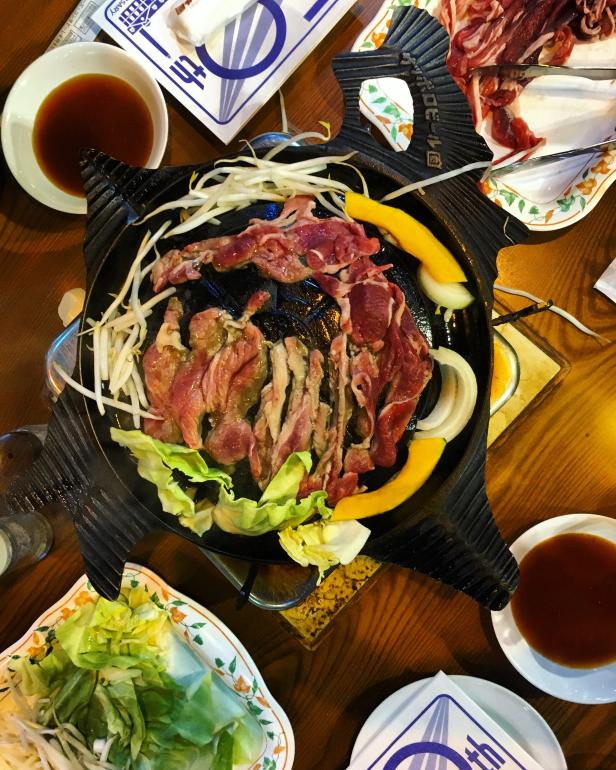 Today I’m in Sapporo, the northern city that’s famously home to Japan’s oldest homegrown brewery. In the winter, Sapporo is bitterly cold (and hosts an epic ice festival), but in the summer, the weather is wonderfully balmy. After a tour of the old Sapporo brewery, I visit the onsite beer garden, which in addition to the brewery’s signature lagers, specializes in a dish called Jingisukan, or “Ghengis Khan.” Slivers of raw mutton are grilled on a heavy metal skillet, which is heated table side. The dish is thought to be inspired by the eating habits of Mongolian soldiers, whose ruler Genghis Khan famously attempted an invasion of the Japanese mainland twice unsuccessfully.