If you think you have to travel far to see the world’s natural beauty, just look up!

The International Cloud Atlas, with the latest edition now available online, didn’t make any additions to the 10 genera, but it added one species, five supplementary features, an accessory cloud and five special clouds that were all previously unlisted, according to the WMO.

Here are the new types of clouds to look out for, wherever you’re traveling. 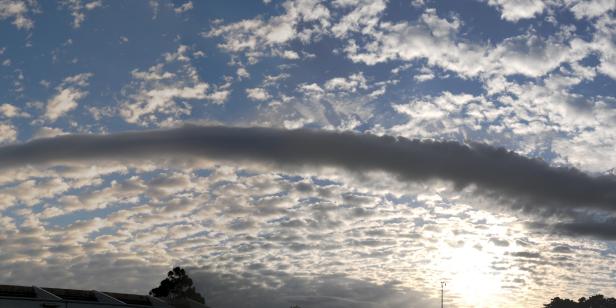 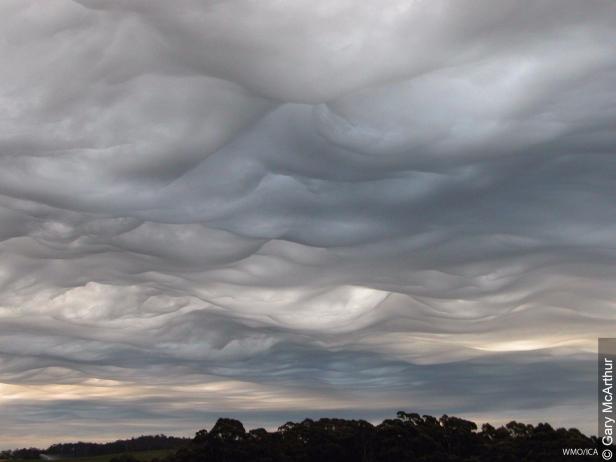 This supplementary cloud has well-defined, wave-like structures in the underside of the cloud. Asperitas is characterized by localized waves in the cloud base, either smooth or dappled with smaller features, sometimes descending into sharp points, like an upside-down sea surface. 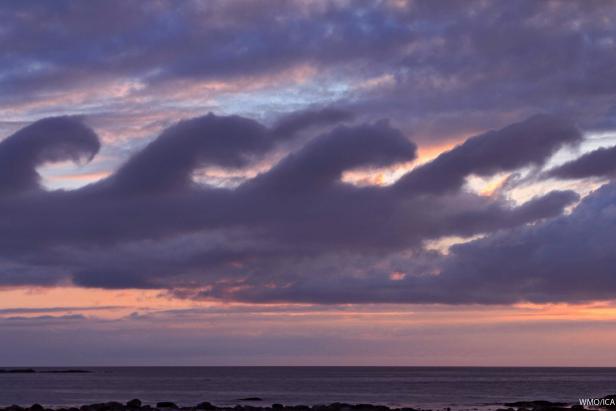 Fluctus is a supplementary feature with relatively short-lived wave formation, usually on the top surface of the cloud, in the form of curls or breaking waves and usually occurs mostly with Cirrus, Altocumulus, Stratocumulus, Stratus and occasionally Cumulus. 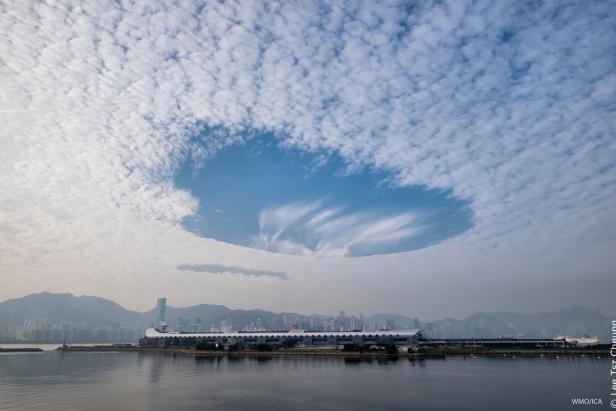 A well-defined generally circular (sometimes linear) hole in a thin layer of cooled water droplet cloud. Wisps of Cirrus typically fall from the central part of the hole, which generally grows larger with time. Cavum is typically a circular feature when viewed from directly beneath but may appear oval shaped when viewed from a distance. When resulting directly from the interaction of an aircraft with the cloud, it is generally linear, in the form of a dissipation trail). Virga typically falls from the progressively widening dissipation trail. 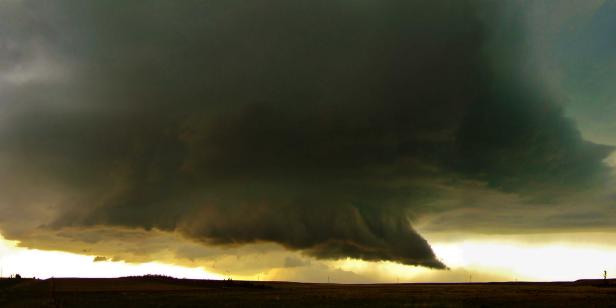 Commonly known as a "wall cloud", the supplementary feature Murus forms as a localized, persistent and often abrupt lowering from the base of a Cumulonimbus. Usually associated with a supercell or severe multi-cell storm, it typically develops in the rain-free portion of a Cumulonimbus and indicate an area of strong updraft. 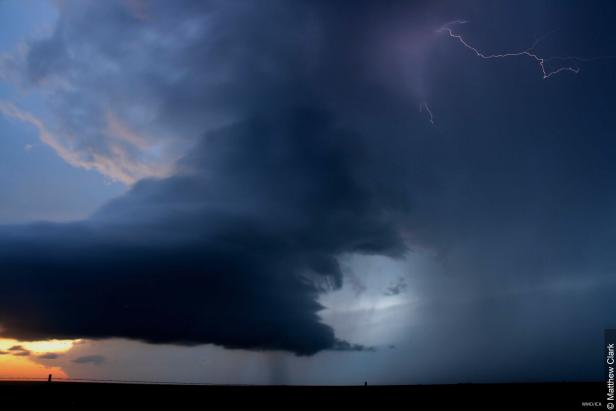 Commonly known as "tail cloud", Cauda is a horizontal, tail-shaped supplementary cloud at low levels extending from the main precipitation region of a Cumulonimbus to the Murus or "wall cloud". It is typically attached to the wall cloud, and the bases of both are typically at the same height. Cloud motion moves away from the precipitation area and toward the murus, often with rapid upward motion near where the tail and wall clouds meet. 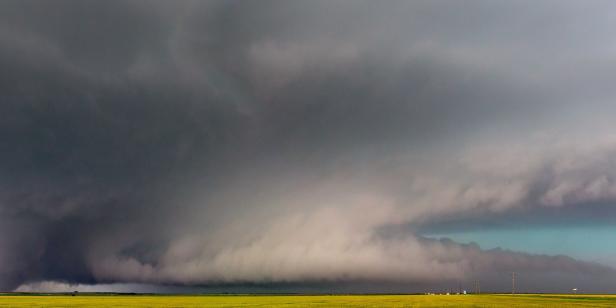 The accessory cloud Flumen forms as bands of low clouds along a severe convective storm, a Cumulonimbus, parallel to low-level winds and moving into or toward the supercell storm. Bands of low clouds associated with a supercell severe convective storm (Cumulonimbus) form parallel to the low-level winds and move into or toward the supercell. One particular type of inflow band cloud is the so-called "Beaver’s tail". This is distinguished by a relatively broad, flat appearance suggestive of a beaver’s tail. 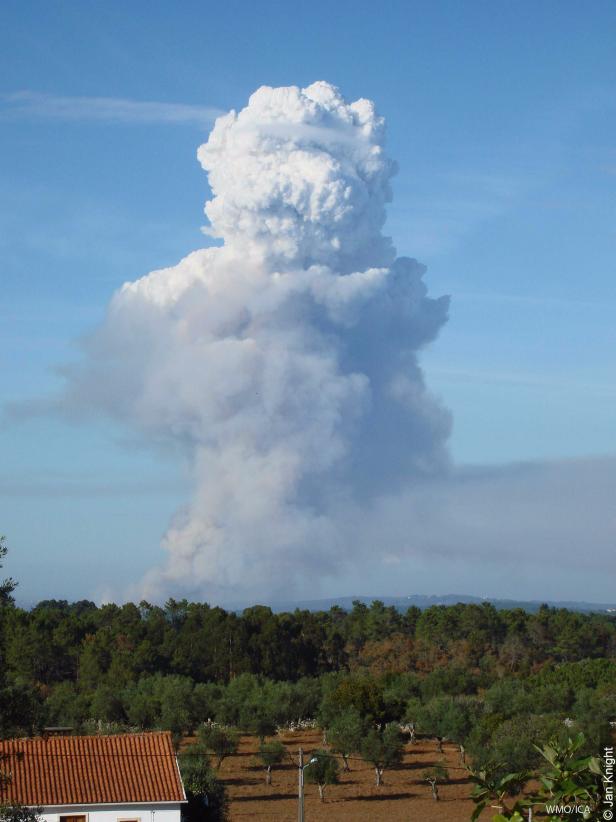 The special cloud Flammagenitus forms as a result of convection initiated by heat from forest fires, wildfires or volcanic eruption. These clouds that result from heat sources and contain water drops will be given the name relevant to the genus, and if appropriate, species, variety, supplementary features and finally by the special cloud name flammagenitus. For example, you might see a cloud classified as Cumulus congestus flammagenitus. 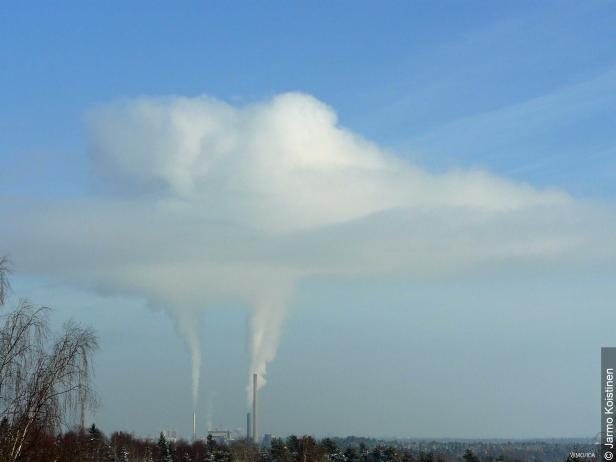 Following the same naming convention as Flammagenitus, the special cloud Homogenitus is added to a cloud genus, and if appropriate, species, variety and supplementary features when it’s observed to form as a direct result of human activity, such as aircraft condensation trails or clouds resulting from industrial processes, like ones generated by rising thermals above power station cooling towers. Cumulus mediocris homogenitus is an example. 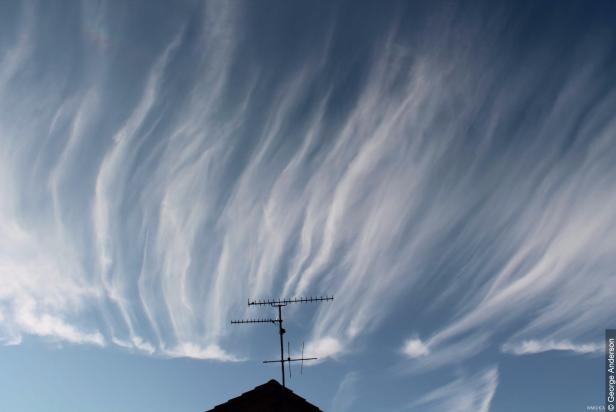 Another special cloud, Homomutatus occurs when persistent contrails are observed over a period of time and under the influence of strong upper winds, causing them to grow and spread out over a larger portion of sky. The cloud eventually takes on the appearance of more natural cirri-form clouds. When a cloud forms in this way, "homomutatus" follows the genus and, if appropriate, variety, species or supplementary features. 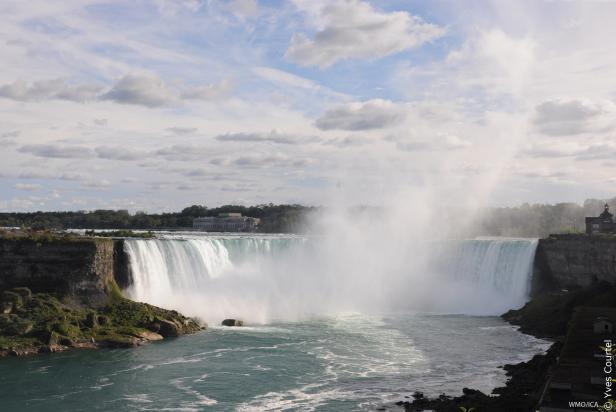 If you’ve ever visited Niagra Falls, you’ll probably recognize this special cloud. Cataractagenitus forms in the vicinity of large waterfalls as result of water broken up into spray by the falls. The downdraft caused by falling water is compensated for by the locally ascending motion of air. Cumulus cataractagenitus is an example. 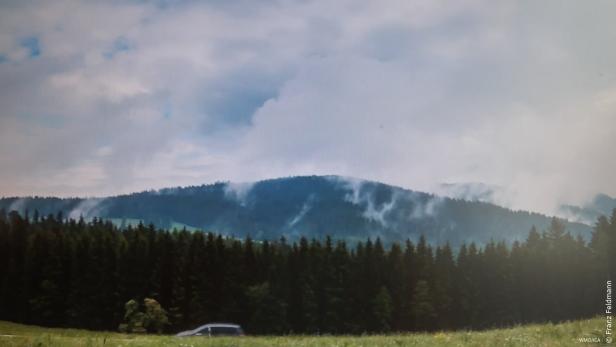 The special cloud type Silvagenitus occurs when the clouds develop locally over forests as a result of increased humidity due to evaporation and evapotranspiration from the tree canopy. 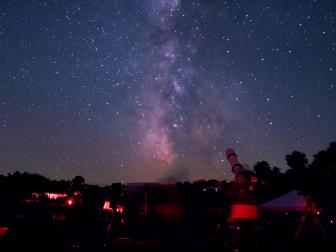 We’ve got chills and wanderlust. 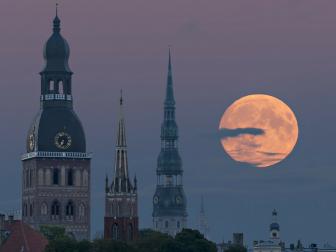 The perks of being a night owl.